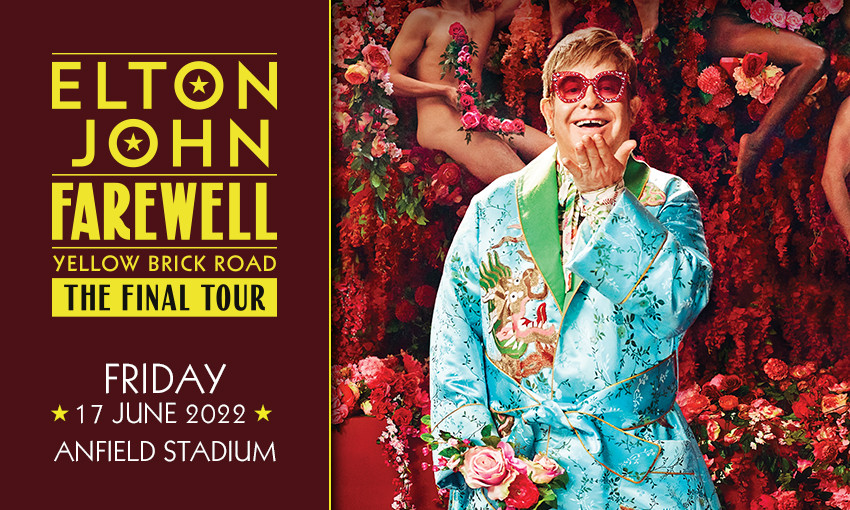 Music legend Elton John has confirmed he will play at Anfield as part of his Farewell Yellow Brick Road: The Final Tour dates, on Friday June 17, 2022.

Anfield is one of just five stadiums the icon will play across the UK during the tour, which kicks off in May 2022, and will be the last time Elton ever performs in Liverpool on tour.

Tickets for the Anfield show and other UK dates will go on sale at 10am BST on Wednesday June 30 via Ticketmaster, AXS, Alt Tickets and Gigantic.

Liverpool FC season ticket holders, official members, Official Supporters Clubs and hospitality members will be included in the pre-sale for this concert.

The Elton John Farewell Yellow Brick Road Tour kicked off to a sold-out crowd in September 2018 and has since received rave reviews around the world.

The critically acclaimed show takes the audience on a magical journey through his incredible 50-year career with never-before-seen photos and videos, all set to the tune of some of Elton’s most beloved songs from his legendary catalogue – including Bennie and the Jets, Rocket Man, Tiny Dancer, and Philadelphia Freedom.

Announcing the final dates of his tour on social media, Elton said: “Hello, all you wonderful fans out there. I’m coming to you today with an announcement I’ve been working towards for, well, all my life: the shows that I announce today will be my final tour dates ever in North America and Europe.

“I’m going to go out in the biggest possible way, performing at my very best, with the most spectacular production I’ve ever had, playing in places that have meant so much to me throughout my career.

“Whether it’s next summer in Frankfurt or at the legendary Dodger Stadium for the grand finale in the United States, I can’t wait to see you all on the road one last time. This has been an incredible tour so far, full of the most amazing highs, and I look forward to making more wonderful memories with you at these final shows. To all my friends Down Under, we’ll be seeing you too. Thank you and I look forward to seeing you in your town.”

Elton’s career achievements to date are unsurpassed in their breadth and longevity as the No.1 top-performing solo male artist. He is one of the top-selling solo artists of all time, with one diamond, 38 platinum or multi-platinum, and 26 gold albums, more than 50 Top 40 hits, and he has sold more than 300 million records worldwide.

In August 2018 he was named as the most successful male solo artist in Billboard Hot 100 chart history, having logged 67 entries, including nine No.1s and 27 Top 10s.