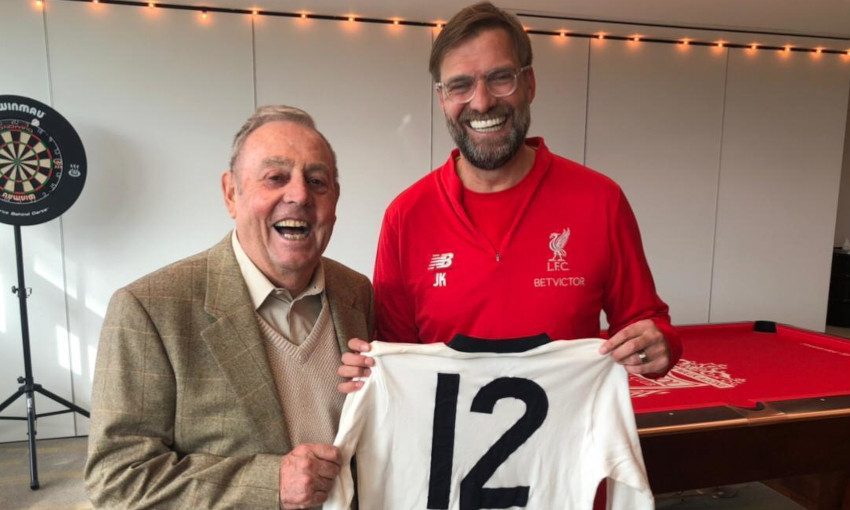 Jürgen Klopp paid a touching tribute to Ian St John and described his pride at having the honour to have met the Liverpool legend at Melwood.

St John, who sadly passed away on Monday evening at the age of 82, visited the Reds’ former training complex in 2019, where he met with the manager and presented him with a unique gift – an opposition jersey from an international game he’d taken part in for Scotland against West Germany.

Speaking to Liverpoolfc.com, Klopp recalled: “First of all, when I arrived here at Liverpool I knew a lot about the 90s and this kind of stuff because of when I became an adult and was interested in international football.

“But when you arrive at Liverpool, you become aware immediately of these legends from the time before – and some of them, I have been lucky enough to meet, one of who was Ian.

“He was not only football-wise a legend, but a true legend as a person. It was a pure pleasure to meet him.

“He had a little present with him; I’m not sure it was his first game for Scotland, but it was [a shirt] from a game against West Germany with the number 12. I am now 53 years old so I don’t remember 100 per cent who the player was, but in my mind it was Heinz Flohe, a player from Cologne, I think he said.

“It was just outstanding and I’m just so happy to have met him because the best thing you can learn from these legends is how easy it is to stay the person you are, even when you had the biggest success in the past.

“I feel really honoured to have met him and when I heard the news today, I was devastated. All my prayers go to his family and I know he is in a better place as well.

“I am really, really happy I had the opportunity to meet him.”