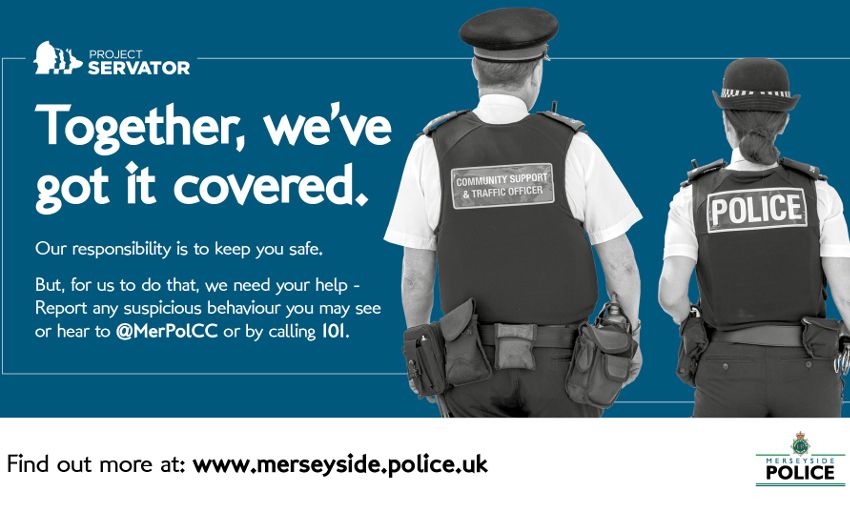 Project Servator is a new policing tactic used to deter and detect a range of criminal activity, from shoplifting and pickpocketing, to more serious crime including terrorism.

The campaign - launched across Merseyside earlier this year - is designed to increase vigilance within communities, encourage the reporting of suspicious behavior, whilst reassuring the general public.

LFC joins venues across the city, including the Liverpool Echo Arena, Liverpool ONE, the Albert Dock and the Merseyside Maritime Museum, to work in partnership and encourage reporting of suspicious activity.

The project is made up of a range of police resources, including uniformed and plain-clothed officers specially trained to identify individuals with criminal intent, police dog units, mounted officers and CCTV operators. All deployments are unpredictable and will take place at any time. They can last for different amounts of time and involve varying numbers of officers and take place anywhere across Merseyside.

Alongside the club’s support for the campaign fans can expect to see an increased steward and police presence around Anfield stadium on matchdays.

Starting at tonight’s UEFA Champions League game against Red Star Belgrade, stewards will be asking supporters on arrival to have their tickets ready, any coats and jackets open in preparation for entry, and any bags ready to be searched. This will help the club improve its matchday operation and reduce queues at the turnstiles.

Bringing bags to the stadium is actively discouraged. However, fans arriving at the stadium with a small personal bag (i.e. handbag/medical bag) should expect this to be searched and tagged before entry. Bringing a bag may delay your entry and, in some cases, may lead to non-entry to the stadium.

For everyone’s safety, there is a list of items which you can/cannot bring into the stadium. Please check this list carefully before you travel.

Thank you for your continued support in keeping Anfield a safe and welcoming environment for all fans.

How can you help?

If you see anything that seems out of place, unusual, or you feel someone is acting suspiciously, don’t be afraid to raise your concerns with the police.