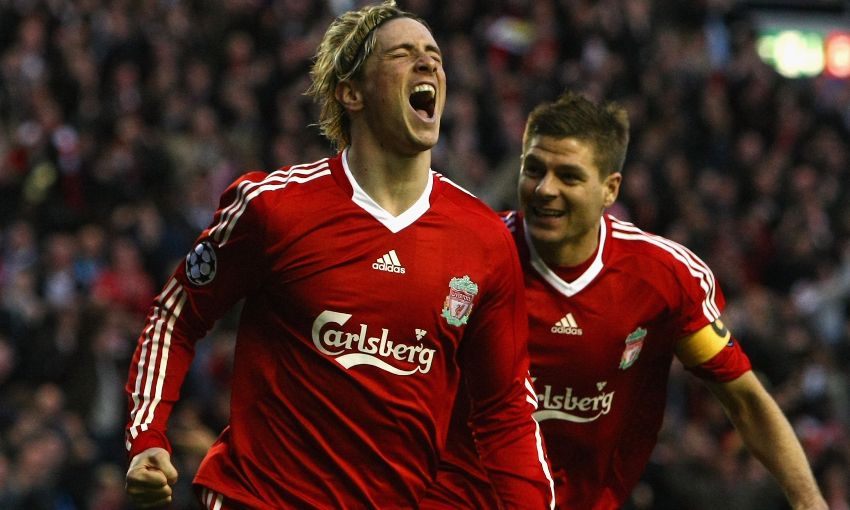 It was love at first sight for Liverpool and Fernando Torres.

“His armband said he was a Red…” rang the Spaniard’s tune on the Kop, almost incessantly from his Anfield debut in August 2007 – marked with a goal, of course – until his contentious departure to Chelsea three-and-a-half years later.

They bounced and bounced as the net kept bulging. ‘El Nino’ was truly prolific, scoring from any angle, with his left foot, right foot or head. And doing so constantly.

142 games in Liverpool colours brought 81 goals. His relationship with the supporters who sang his name was perhaps matched only by his near telepathic partnership with Steven Gerrard.

And although both connections were severed in raw circumstances in the final days of January 2011, the memories created by Torres while Merseyside was his home can never be forgotten.

“He was an absolute joy and a pleasure to play behind,” says Gerrard in the latest episode of ‘Premier League Heroes’ – which premieres on LFCTV at 7pm BST tonight.

“My responsibility was to try to give him the service. And it was also my responsibility as a captain to make him feel good. Not just myself, but with the likes of Jamie Carragher we had a very humble dressing room, and we realised straight away that for us to be successful it was important that we had a striker who felt like he was the main man in the dressing room.

“All the staff played their part as well. I feel like we all played a game around Fernando to make him feel phenomenal, like he was the main man.

“He took that confidence out onto the pitch – and rightly so. Liverpool’s No.9, who is going to get you all the goals and break records, it’s always important that the main man feels important.

“We all helped him, as players, to feel invincible and he took that into his performances.

“It’s a shame how it ended here. But I think the majority of fans have forgiven him. He looks back at his Liverpool career with fond memories.”

Watch ‘Premier League Heroes: Fernando Torres’ at 7pm and 11.30pm BST on LFCTV tonight, with repeats to follow in the coming days.

The show will also be available on demand on LFCTV GO, where you can catch up on the previous episodes of the series – featuring Gerrard, Jamie Carragher, Robbie Fowler, Michael Owen, Steve McManaman and Sami Hyypia.

One more edition is set for broadcast this month, with Luis Suarez the subject of the programme’s eighth chapter.