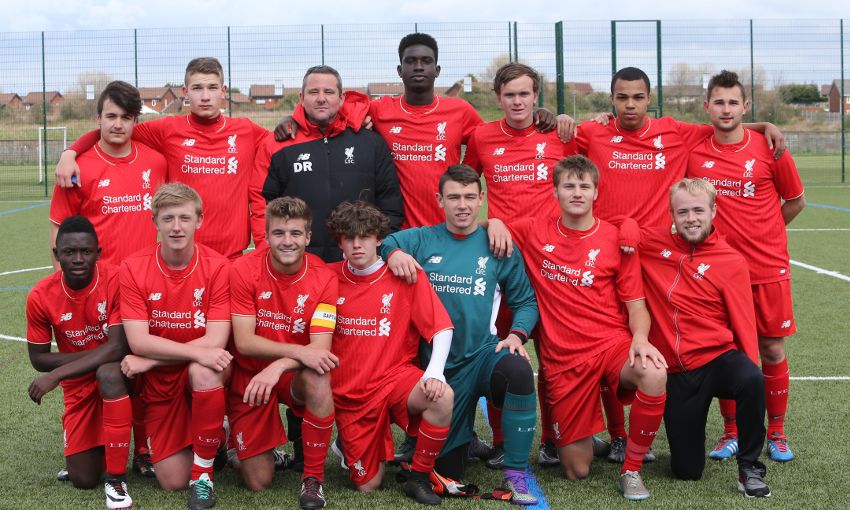 LFC Foundation College completed a league and cup double in the National U19 Youth Development League as they defeated Burton Albion at the Kirkby Academy.

The young Reds have enjoyed a remarkable season, remaining unbeaten and earning plaudits for their exciting brand of football and their conduct on and off the pitch.

On a beautiful evening at the LFC Academy, the hosts started the game with intent, taking hold of the game after 20 minutes with the midfield axis of Aubrey Rodgers, Mike Muscat and Jack Hazelhurst pressing and gaining possession then dictating the tempo.

The LFC Foundation eventually found the breakthrough with an exquisite 25-yard strike from Hazelhurst. The former Tranmere Rovers player has had an outstanding season stepping up from the U17s to play for the U19 team.

Highly competitive and with unbelievable skill, Hazelhurst is a delightful player when he weaves his magic.

It wasn't long before Nevitt, whose progress is being monitored by MLS scouts, nodded home to make it 2-0 from an Aarron Pomeyie cross.

The introduction of the classy Niall Walsh in midfield kept the young Reds on the front foot and they would have added to their lead but for a dazzling display from the Burton goalkeeper, who kept the score down to 2-0 at full-time.

The trophy and medals were presented by Margaret Aspinall, chair of the Hillsborough Family Support Group, who commended all players for the high quality and fine spirit the game was played in.

League chairperson Louise Macey of Birmingham City FC said: "It was an outstanding performance by Liverpool FC Foundation College and a great evening for the spectators."

Andrea Cooper, head of the Liverpool FC Foundation, added: "What a brilliant night for the students of the college and their parents. Not only achieving success in the classroom, but on the football pitch also."

This season, Foundation College players have been closely watched by scouts with the leading goalscorer Nevitt earning a trial at Barnsley FC and securing a summer playing in the USA in the prestigious Maguire Cup representing Florida Surf, alongside teammate Bartosz Kowalcyzk.

The college are currently recruiting new male and female students with an open evening taking place on Monday May 16 at 4pm at Wyncote Sports Ground, L18 6HF. Call 0151 724 4983 to secure your place.