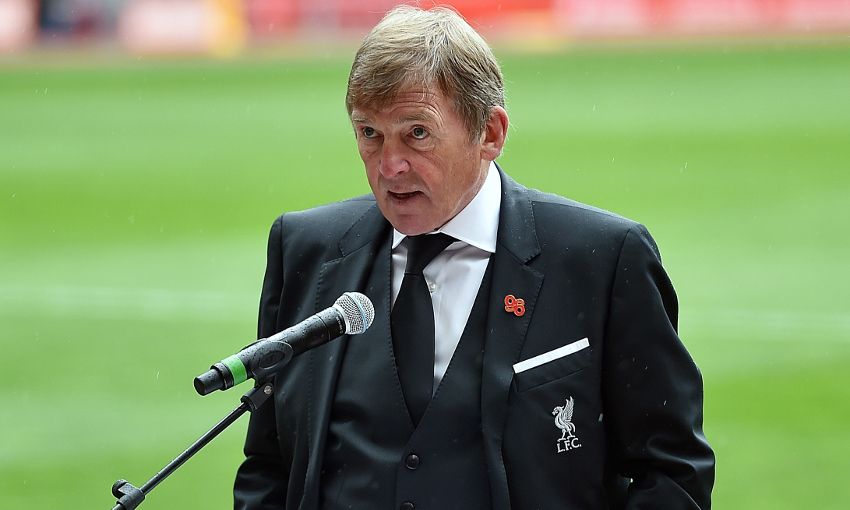 Following the return of the jury's determinations at the Hillsborough inquests today, Kenny Dalglish offered his reaction in an interview with Liverpoolfc.com.

Kenny, firstly, what are your thoughts on the unlawful killing verdict?

Well it can only be a pleasure for the families who have endured 27 years trying to get to the point that they knew should have been there 27 years ago. The way they have gone about getting to this point has been unbelievable - their humility, the way they've conducted themselves, their dignity and the determination to get what they thought was justice and the belief from them that the supporters were in no way, shape or form, to blame. You're pleased that they've won this but on the other hand it's taken 27 years out of their life, what they gave for their life and their families' life. It's fantastic news for them and it's news that they thoroughly deserve. I don't know which words you would use to describe your feelings - certainly 'celebration' is not the right word. Completely and utterly correct, the supporters of Liverpool Football Club have been totally vindicated and there'll be a lot of people there who have heard the verdict and they might be shaking in their boots a little bit because, obviously, you would expect there to be some recompense to anybody who's tried to alter or affect the truth coming through here and also in affecting the outcome. If that is the case, then surely if there is anyone like that then they're the ones that are going to be called to task.

As someone who knows them well, what do you think has kept the families going all this time?

The belief that they were telling the truth all this time. And the belief that the people that were close to it at Liverpool Football Club and the people who supported the club that were there on that day, [that] they knew the truth. They knew that it wasn't their fault. They knew that they were innocent and it's absolutely fantastic that they have done it to get the verdict unlawful killing, which is what they were wanting. They couldn't have asked for any more. When Andy Burnham came and said he would get the papers released at an earlier date than the 30 years that was government stipulation, he's done a fantastic job getting that. It's easy for us to talk about it and if you think very deeply for the families and what they've been through that there's been a lot of people who have walked alongside them who don't get the credit they deserve. There has been fantastic people there like Phil Scraton who have been unbelievable in the support for the families. All Marina did, and myself, at the beginning is do for the families what they done for us and that was giving our support, we have, week in, week out, their support.

Tomorrow there's a civic event on the steps of St George's Hall - how pleasing is it that the people of Liverpool will have the opportunity to show their appreciation for the families?

I think everybody knows they show appreciation. I think that's been one of the most important reasons that they've been able to continue for 27 years, the support that they've had from the people of Liverpool and elsewhere. Without that support, and there have been tough years - it's easy when you go back over and say '27 years' but they actually go through 27 years of your life fighting this and there were really, really tough days. It's been fantastic that they've been there and it's fantastic that they've come out the other the end with every judgement in their favour.

The jury totally exonerated the supporters of responsibility - what's your message for the survivors on a day they've waited a very long time for?

[For] many people who survived, it was traumatic for them as well. They lived through it, they did everything they possibly could to help people who, at the day, were struggling. If the supporters maybe got a little bit more help from the people who were supposed to be there to help then maybe there wouldn't have been as many fatalities as there were. The people that were there will feel their pleasure that the families have been given a day with the judgement that was passed, but there's no-one who can put themselves in a position that the families are in, reflect and quote accurately what they have been through - we don't know, we've not got a clue really what they've been through. But what they have been, they've been magnificent in what they set out to achieve and it's congratulations to each and every single one of them, if that's the right word, for getting this victory in getting justice for themselves that they fought so hard to get. The verdict of unlawful killing, the vindication of every supporter that was there, it gives them a clean bill of health. And now I'm sure they'll sit back and reflect and read through the coroner's rulings and see if there are other steps that maybe they want to take or they can take or other avenues where people who maybe were involved in it and trying to cover things up are going to be brought to task. But for them, that's heroic what they've done. 27 years of their lives for their loved ones and they get that back. You hold your hat off to them because it would have been much easier for them to have thrown the towel in. But as Bill Kenwright said at one of the services, you don't take on Scouse mothers, you don't take on the Scouse women - they're much more determined than anybody, so congratulations to the Scouse women and men. Congratulations to everybody of the Hillsborough families and the people who helped them get the verdict that they've got. There are not enough plaudits and I'm not intelligent enough to get enough words out to describe how heroic they have been.