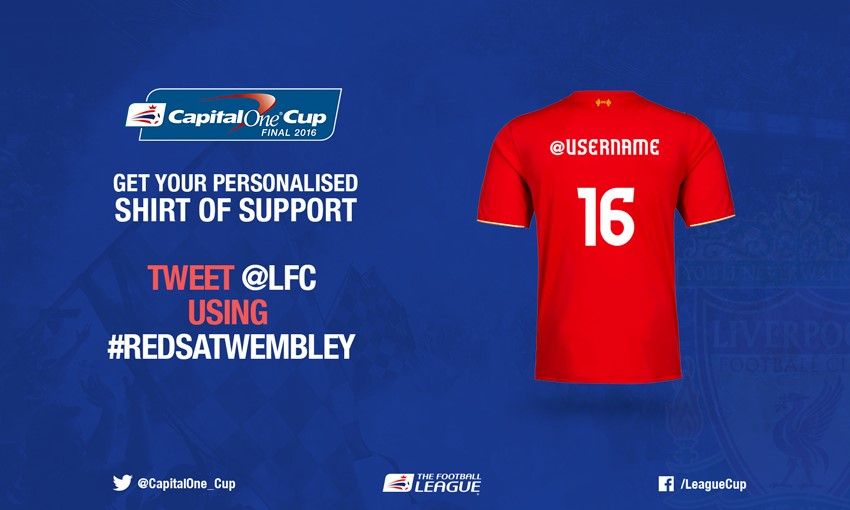 The Football League is to give fans of Liverpool and Manchester City an instant digital personalised club shirt in return for them backing their team ahead of this weekend’s Capital One Cup final at Wembley.

The campaign is part of a range of innovative social media activity that will also see fans able to receive instant pictures via Twitter of the two club’s dugouts during the game, and marks the first time sports fans in this country will have received instant personalised responses on Twitter specific to the team they support.

The #ShirtOfSupport campaign will see Liverpool and Manchester City fans who tweet their club’s Twitter handle alongside either #RedsAtWembley or #CityAtWembley receive an instant response containing their club’s shirt personalised with the fan’s Twitter handle on the back, as well as a thank you message from the Football League and a fan number.

Throughout the week, the Football League will be tracking the number of fans that register their support for both clubs, with fans able to get an instant update on which of Liverpool or Manchester City has registered the most supporters ahead of the final by tweeting their club’s final hashtag to @CapitalOne_Cup.

Each club’s digital support will also be given a visible presence at Wembley Stadium Connected by EE on matchday, with the Twitter profile pictures of fans registering for #ShirtOfSupport being used to create a mosaic image to be displayed at the match. The combined physical audience of 90,000 fans at the match and the digital ‘crowd’ represented through the Twitter profile picture mosaic will mean the Capital One Cup final 2016 will be the ‘most attended’ final ever.

On match day, for the #FinalCam part of the campaign, fans can tweet @CapitalOne_Cup using the hashtag #WembleyWay to trigger an instant photo reply from a camera positioned to show the famous sight of fans making the way to the stadium along ‘Wembley Way’.

During the match fans will be able to receive exclusive content from each club’s bench. By tweeting @CapitalOne_Cup and using either #LFCBench or #MCFCBench, fans will trigger an instant photo of their club’s bench. This image will be immediately tweeted back to the fans Twitter account.

To round off the campaign, the Football League will be sending a congratulations tweet after the final whistle to fans of the winning team who registered for their #ShirtOfSupport. The Tweet will include a photo of the winning team lifting the trophy.

Commenting on the activity, Drew Barrand, marketing director at the Football League, said: “The Football League is always looking at innovative ways to engage our fan base around our major events. This year’s Capital One Cup final activity once again breaks new ground by bringing a unique first to Twitter for the UK sport industry.

"We look forward to both sets of fans backing their team and receiving their #ShirtOfSupport, as well as for the first time ever, providing supporters with exclusive images of their team’s bench during the match through our unique #FinalCam activity.”

The Capital One Cup final kicks off at 4.30pm on Sunday and is exclusively live in the UK on Sky Sports 1 with coverage from 3pm, with extensive coverage in countries around the world.

Important info for fans travelling to Wembley for Spurs game