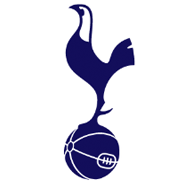 Follow all of the build-up, action and reaction as Liverpool take on Tottenham Hotspur in the Premier League.

The manager gave his views on Liverpool's record-breaking 1-0 win at Tottenham Hotspur in his post-match press conference tonight.

You can read a full summary of what he had to say by clicking here. 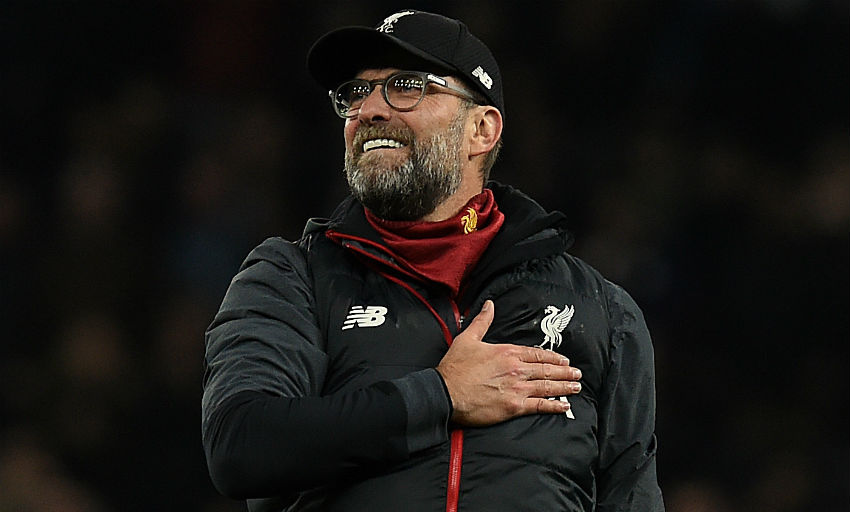 And here's how the table is looking on this Saturday evening...

The story of the night, as told by Opta widgets...

Liverpool edge out Tottenham Hotspur 1-0 in London to open a 16-point lead at the top of the Premier League table.

Roberto Firmino's first-half goal settles the contest in the Reds' favour, who have won 20 of their 21 top-flight games this season. 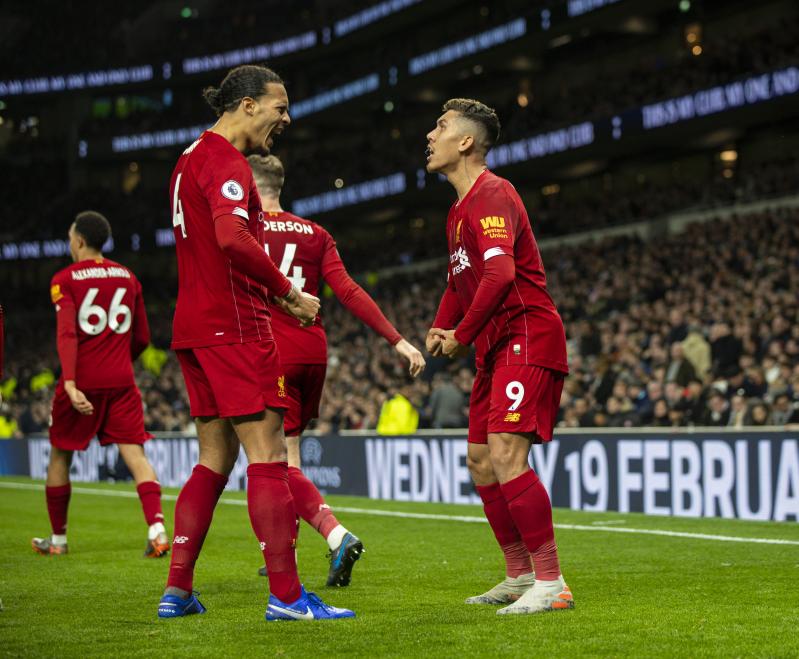 Shaqiri is on for Salah.

Three minutes of added time to be played...

Nimble footwork from Origi creates a chance, but Gazzaniga saves.

Lamela spins into space on the edge of the box and shoots... claimed by Alisson.

Spurs should have levelled. Aurier's delivery from the right finds Lo Celso unmarked, but he steers wide of the far post on the slide.

Origi comes on for Mane for the final knockings.

Lo Celso scampers into space and flashes a dangerous ball right across the face of Liverpool's goal.

Liverpool are afforded a huge let-off as Lo Celso wins the ball from Wijnaldum and plays it into Son, who is unmarked inside the box, but he scoops well over the crossbar.

A double change for Spurs - Lamela and Lo Celso are on for Rose and Eriksen.

Robertson and Tanganga clash in a heavy challenge. Play goes on, however, and Mane's close-range header from Trent's cross is kept out by Gazzaniga.

Son controls Eriksen's cross and has a shot deflected wide of the post by Oxlade-Chamberlain.

But it's raised Spurs fans' hopes inside the stadium.

Now Firmino wins the ball back. Salah returns it to him, but his shot is straight at Gazzaniga.

A chance for Spurs as Alli breaks forward, but he's thwarted by a thunderous Van Dijk challenge on the edge of the box. It breaks for Aurier, but Alisson makes a smart stop.

Trent strikes one across goal and wide from Mane's cross

Moura breaks into the area and shoots wide of the near post.

Here's the story of the first half, as told by Opta...

Roberto Firmino's thumping finish in the 37th minute is the difference between the teams at the break as the Reds hold the lead at Tottenham Hotspur Stadium. 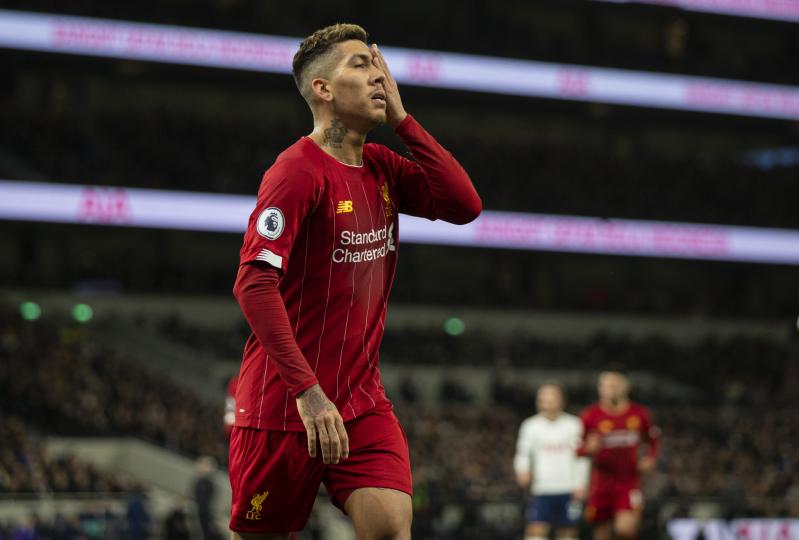 Moura heads over from a corner at the near post.

Three minutes of added time to be played at the end of the first half.

Salah shoots wide of the near post after some nimble footwork.

Oxlade-Chamberlain is booked for a challenge on Moura.

Firmino side-steps Tanganga inside the box from Salah's pass and absolutely rasps the ball beyond Gazzaniga.

A VAR check follows on a potential handball by Henderson - and that's where, for those following this blog closely, our confusion came in... ahe - but we can tell you the goal is allowed to stand and Liverpool lead Tottenham 1-0.

Robertson, Salah and Firmino combine to open up Spurs down the left. The Brazilian's cross finds Mane in the middle, who strikes into the ground and wide.

Joe Gomez is booked for a challenge on Son as Spurs looked to counter.

Liverpool work a corner back into the danger zone through Henderson. Van Dijk meets it unmarked with a header, but it's too close to Gazzaniga and the goalkeeper keeps it out at point-blank range.

Spurs win the ball back high up the pitch again, but Eriksen shoots tamely into Alisson's grasp.

Sanchez clears to prevent Salah reaching Mane's cross in the six-yard box and Firmino's follow-up is blocked by a defender.

Alli shoots over from the edge of the area after holding off Trent's challenge from a long ball.

Son hustles Henderson off the ball and breaks into space, but his shot is well wide from 20 yards

Moura dances into a shooting position on the edge of the box, but drags his effort wide of Alisson's near post.

Liverpool are so close to going 1-0 up inside two minutes.

They sping a counter from a Spurs corner, Firmino turns Eriksen inside the box and shoots but it's blocked by Tanganga in front of the line.

Oxlade-Chamberlain collects the follow-up, but shoots against the base of the post and the hosts scramble it away.

Liverpool are so close to going 1-0 up inside two minutes.

They sping a counter from a Spurs corner, Firmino turns Eriksen inside the box and shoots but it's blocked by Tanganga in front of the line.

Oxlade-Chamberlain collects the follow-up, but shoots against the base of the post and the hosts scramble it away.

Alexander-Arnold tries to free Firmino inside the box, but Gazzaniga is off his line quickly to collect.

Liverpool start the game and we're under way. 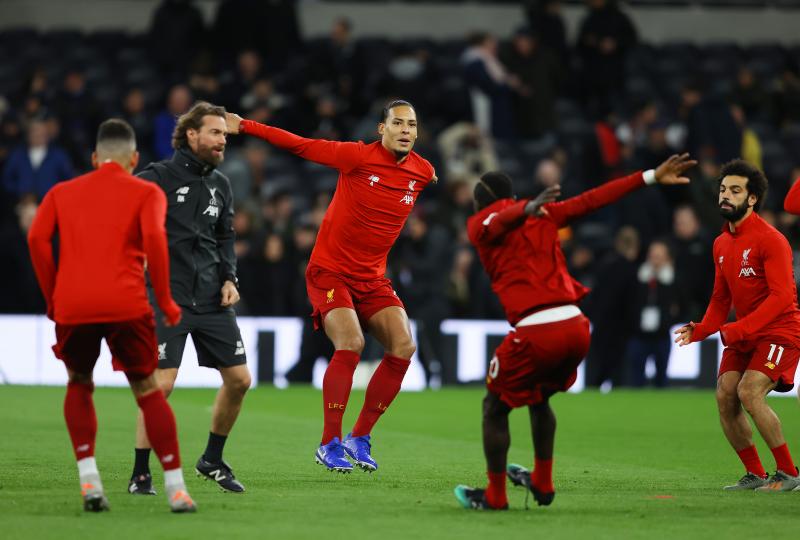 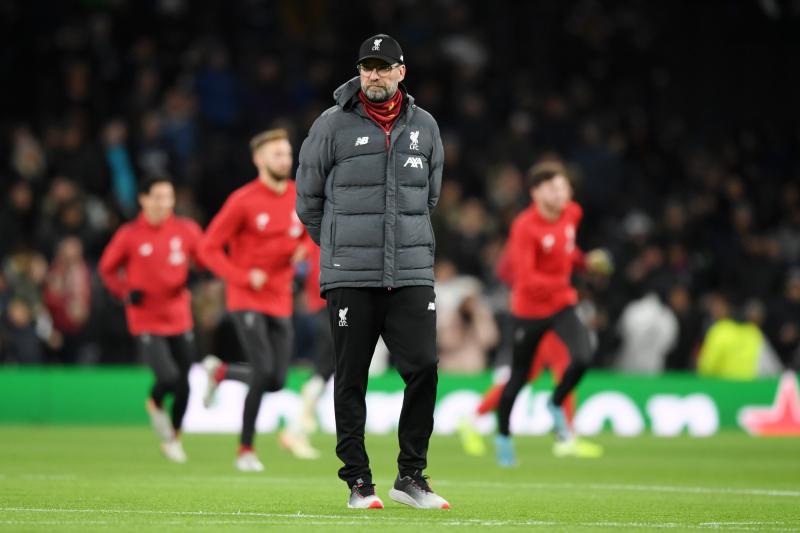 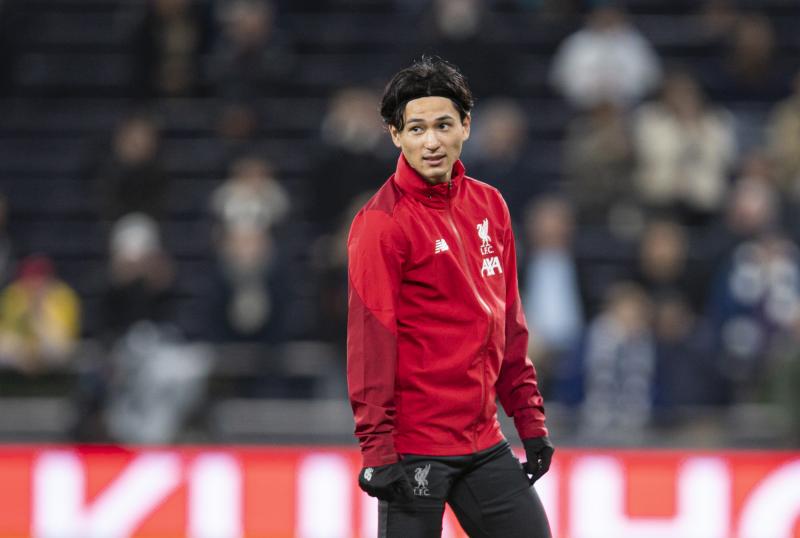 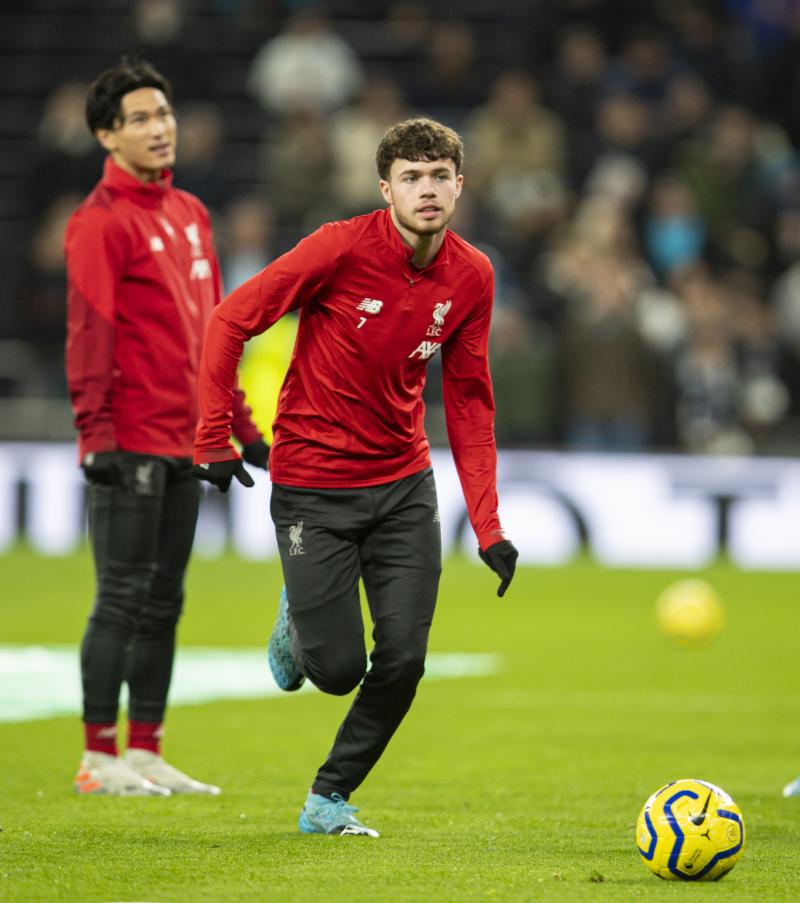 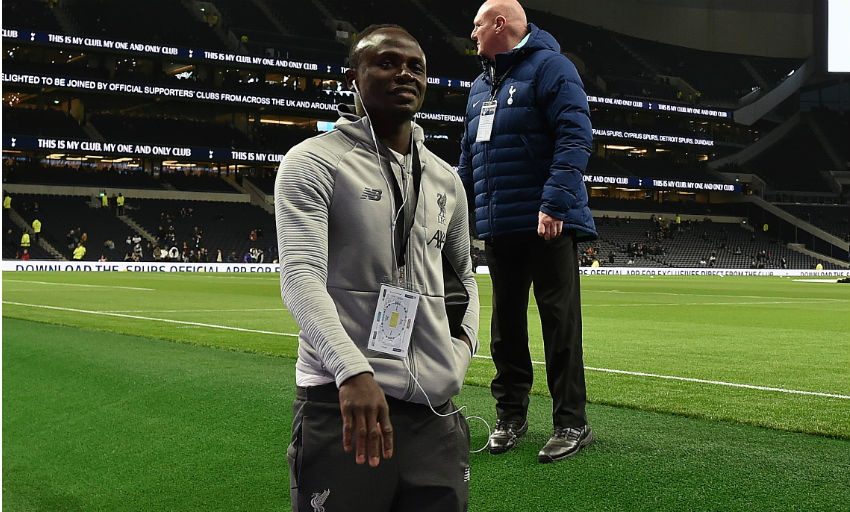 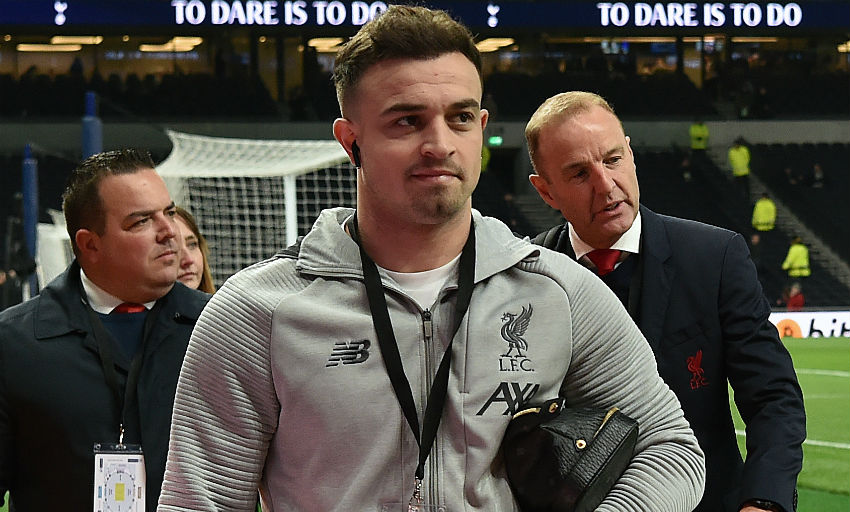 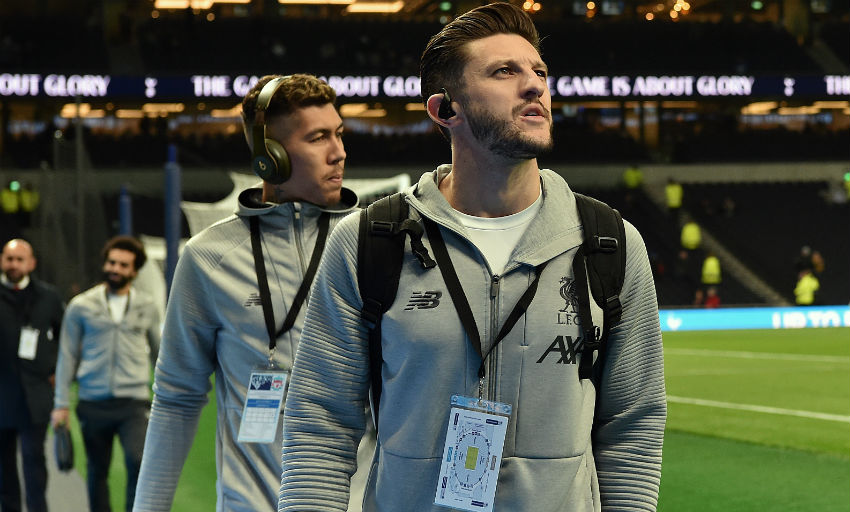 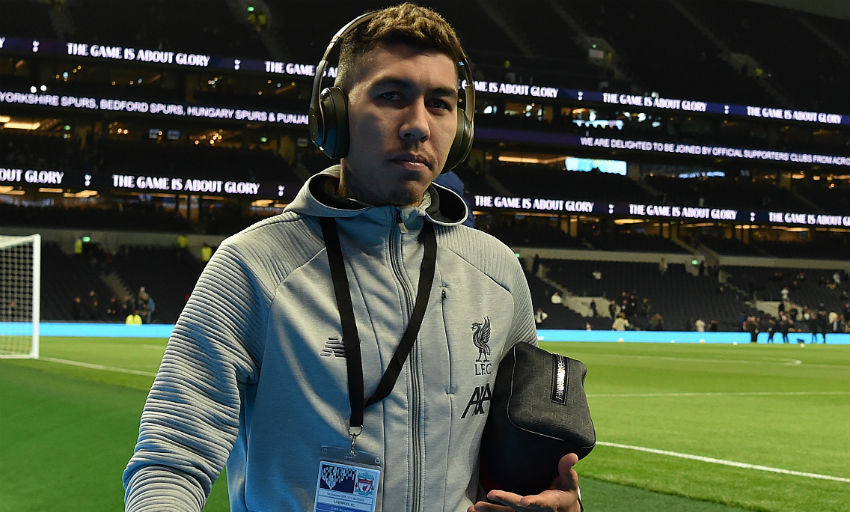 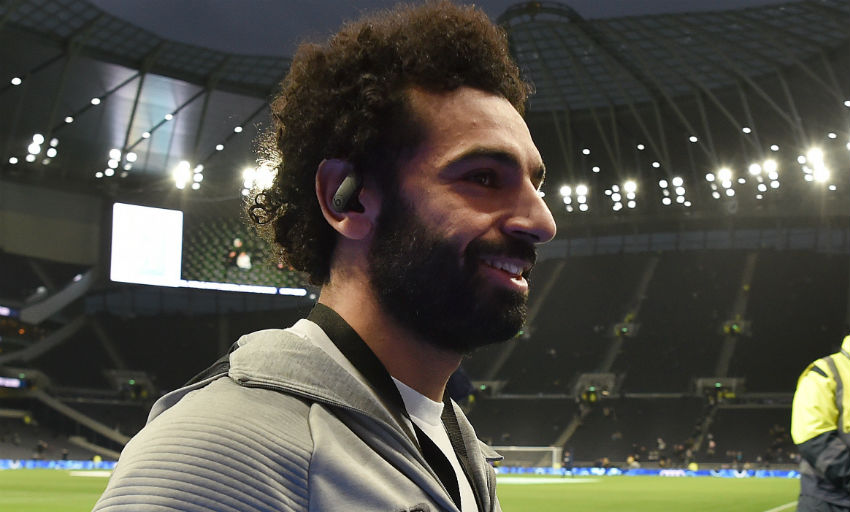 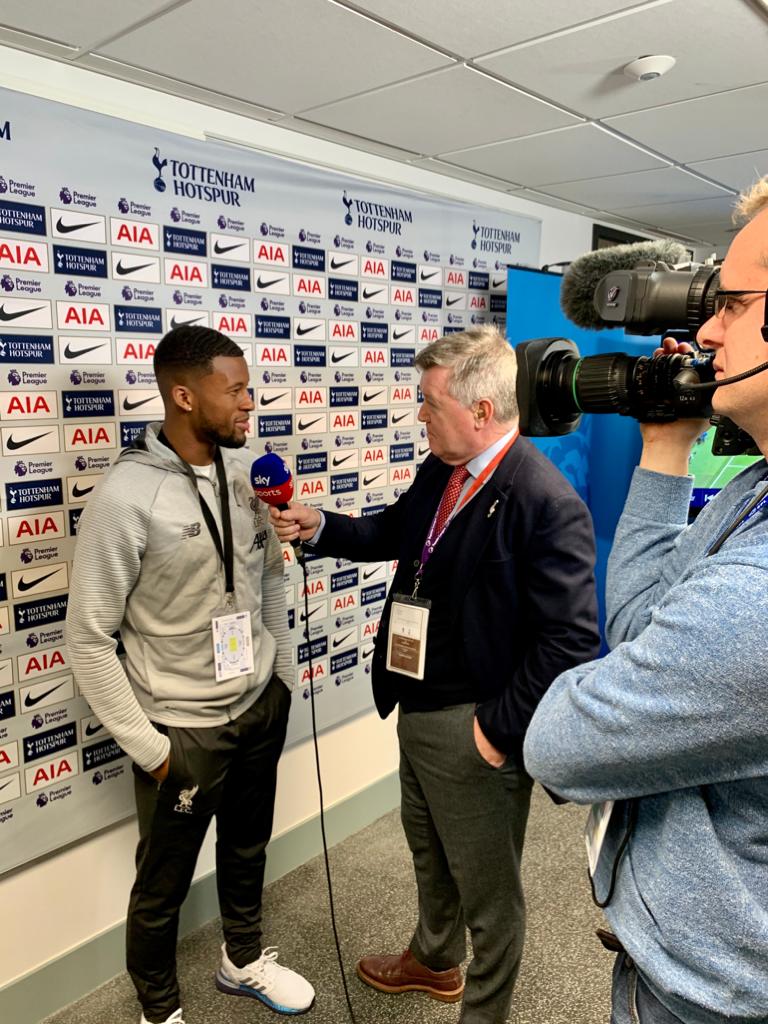 How Opta expect the sides to look... 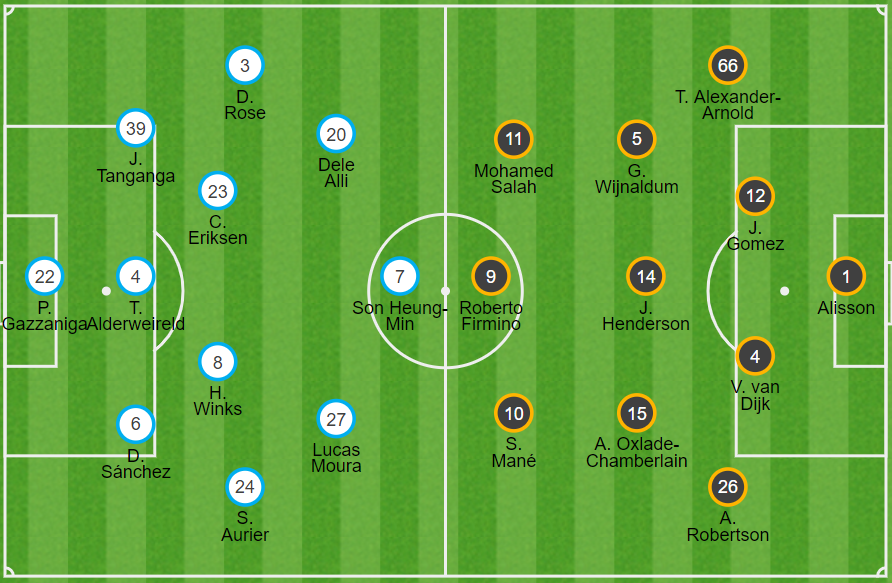 A look behind closed doors... 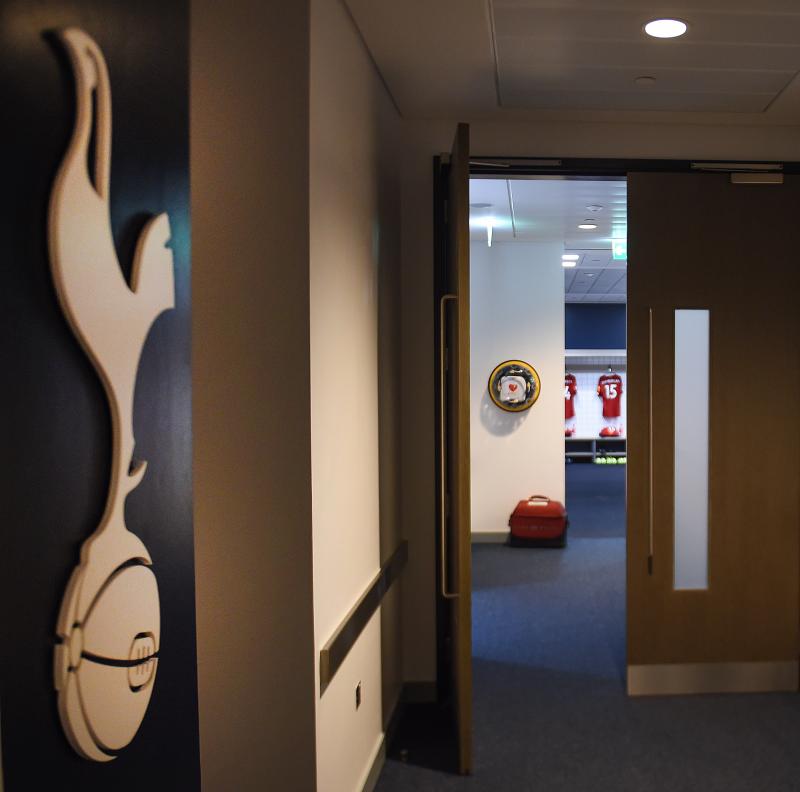 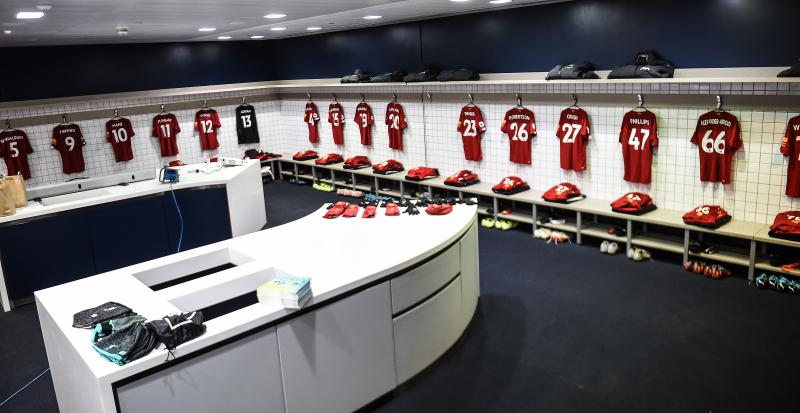 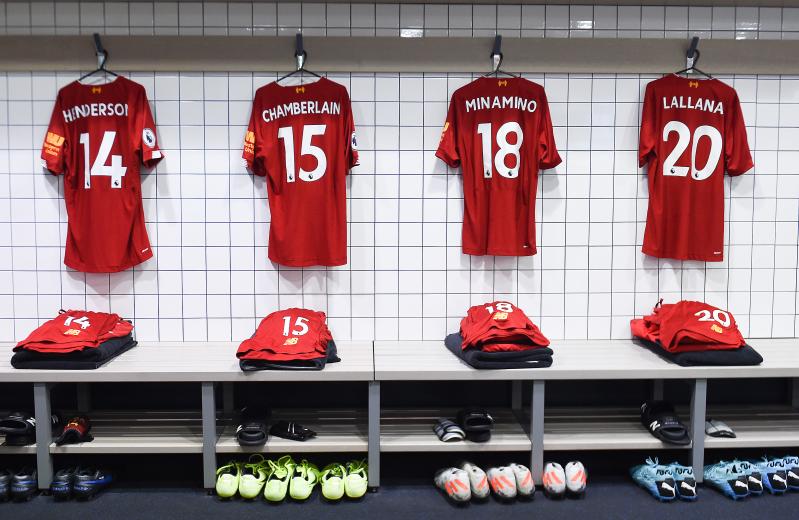 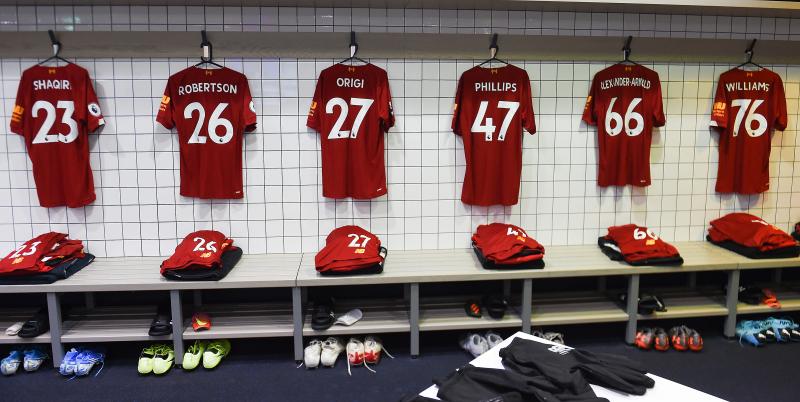 So, as expected, Liverpool’s teamsheet shows 10 changes from the side deployed against Everton in the FA Cup last weekend, with only Joe Gomez retaining his place.

Alex Oxlade-Chamberlain gets the nod to start in midfield, with Xherdan Shaqiri on the bench after recovering from injury, as well as Takumi Minamino.

We can't visit a new stadium for the first time and not deliver an official weather update, can we?

Dot com scribe Sam Williams made sure he packed our trusty thermometer for the journey down - and the mercury gauge is showing a steady 11 degrees at the moment.

It's also overcast and pretty windy, but our sources tell us the chance of rain is minimal and the temperature won't change throughout the night.

A first ever visit to the highly impressive Tottenham Hotspur Stadium. https://t.co/55waJtHHHt

Four BIG @premierleague goals from @MoSalah against @SpursOfficial, which one is your favourite? ⚽🤩

Take a look through all the numbers behind the two sides' Premier League seasons so far... 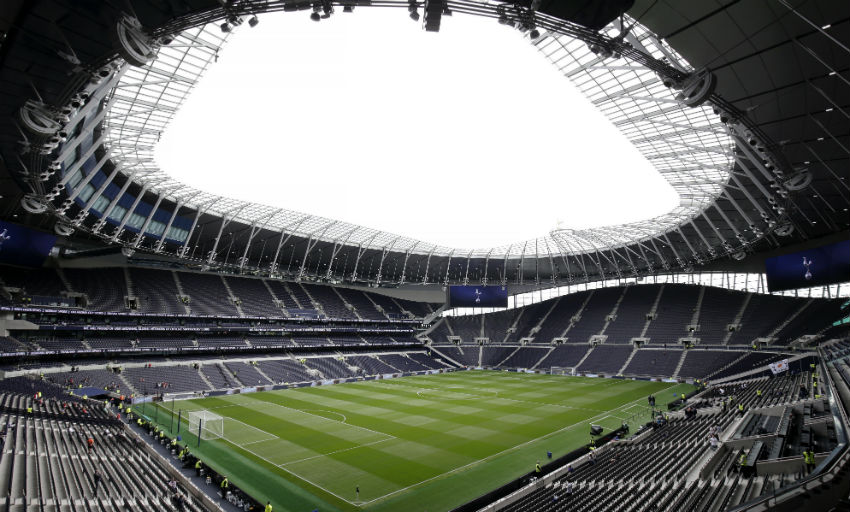 Today's match will be shown live on Sky Sports in the UK.

Two minutes of highlights will be available on LFCTV GO from 9.30pm, with extended action published at midnight.

You can also listen to the game live with our free audio commentary service.

For Reds fans outside of the UK, global TV listings for the match can be found here.

U18s start the day with a win

Liverpool's U18s have been in action today and Barry Lewtas' side produced a dramatic comeback to clinch a 2-1 victory against Stoke City.

Having conceded after just one minute of play, Layton Stewart levelled in first-half stoppage-time and substitute Conor Bradley won it with a header four minutes from the end. 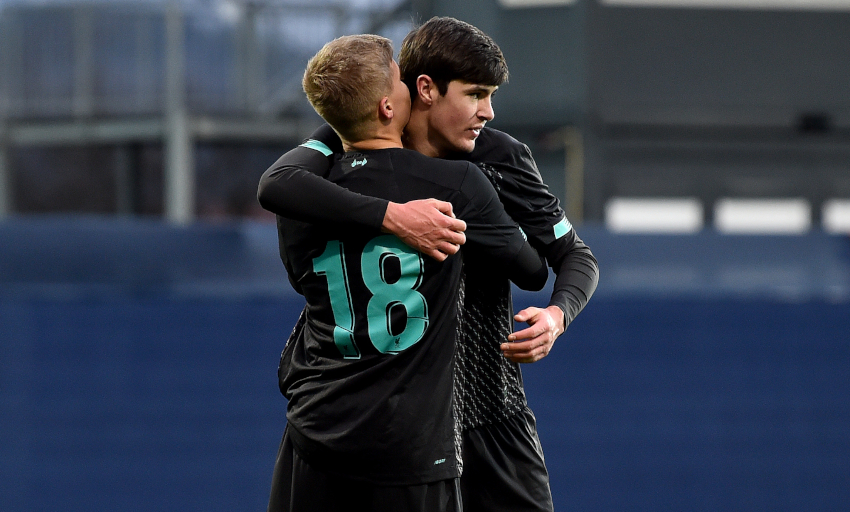 Last time in the league

Liverpool produced a controlled performance to defeat in-form Sheffield United 2-0 on their last Premier League outing. Relive the highlights of that one below... 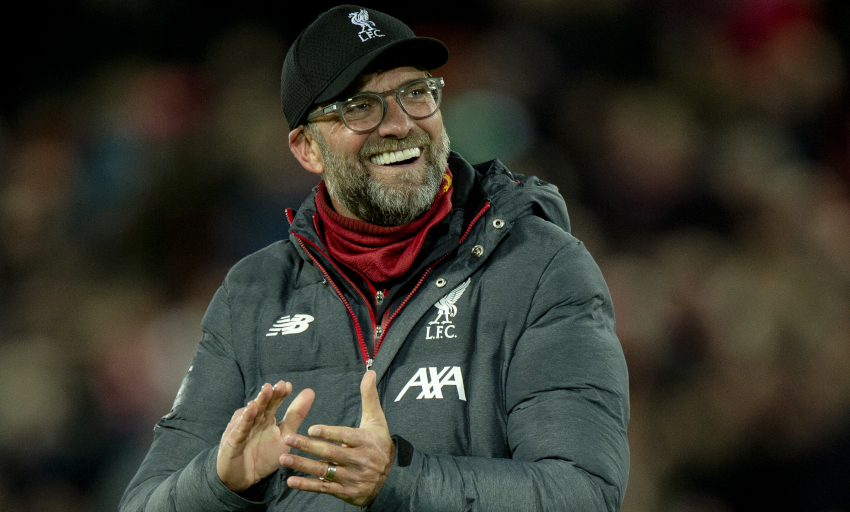 The lowdown on Spurs

We spoke to Jack Pitt-Brooke, who covers Tottenham for The Athletic, ahead of the game for more details on what to expect from Mourinho's men today.

"Mourinho has brought in a new system, a 4-2-3-1 which frees up Serge Aurier to push up from right-back. The style is more compact and much more direct," he reports.

"Dele Alli has improved the most, getting some of his old confidence back and contributing plenty of goals and assists. Some of his flicks and skills have been brilliant to watch."

Jack adds: "I'd still say the biggest strength [for Spurs] is the experience.

"There are players in this team who have been performing at the top level for years, they know how it's done, and they have a manager who has been there and done it before. Maybe they can call on that expert knowledge on Saturday." 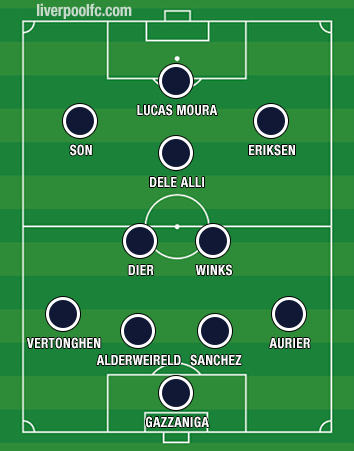 Here's a video worth investing 20 minutes in before the game against Tottenham.

We compiled all 100 contenders from our recent Goal of the Decade poll into one clip for your viewing pleasure...

Klopp: "If we let them play, they will play. Eriksen, Alli, Lo Celso, a lot of players in the midfield already that can create situations, speed there with Moura and Son, 100 per cent. They played a lot of times now with five in the back, I'm not sure if they will do it again, but if, then they have Aurier and Sessegnon on the wings on top of that with speed. It's a home game for Tottenham, you usually go there and they create and try to dominate the game. All of them go for a result and that's possible in different ways."

We checked in on Liverpool's Spurs preparations at Thursday evening's training session - and you can take a look at footage and photos below...

Liverpool registered a phenomenal 5-0 result at Spurs back in December 2013 and our latest Missing Men quiz challenges you to name the starting XI from that day. 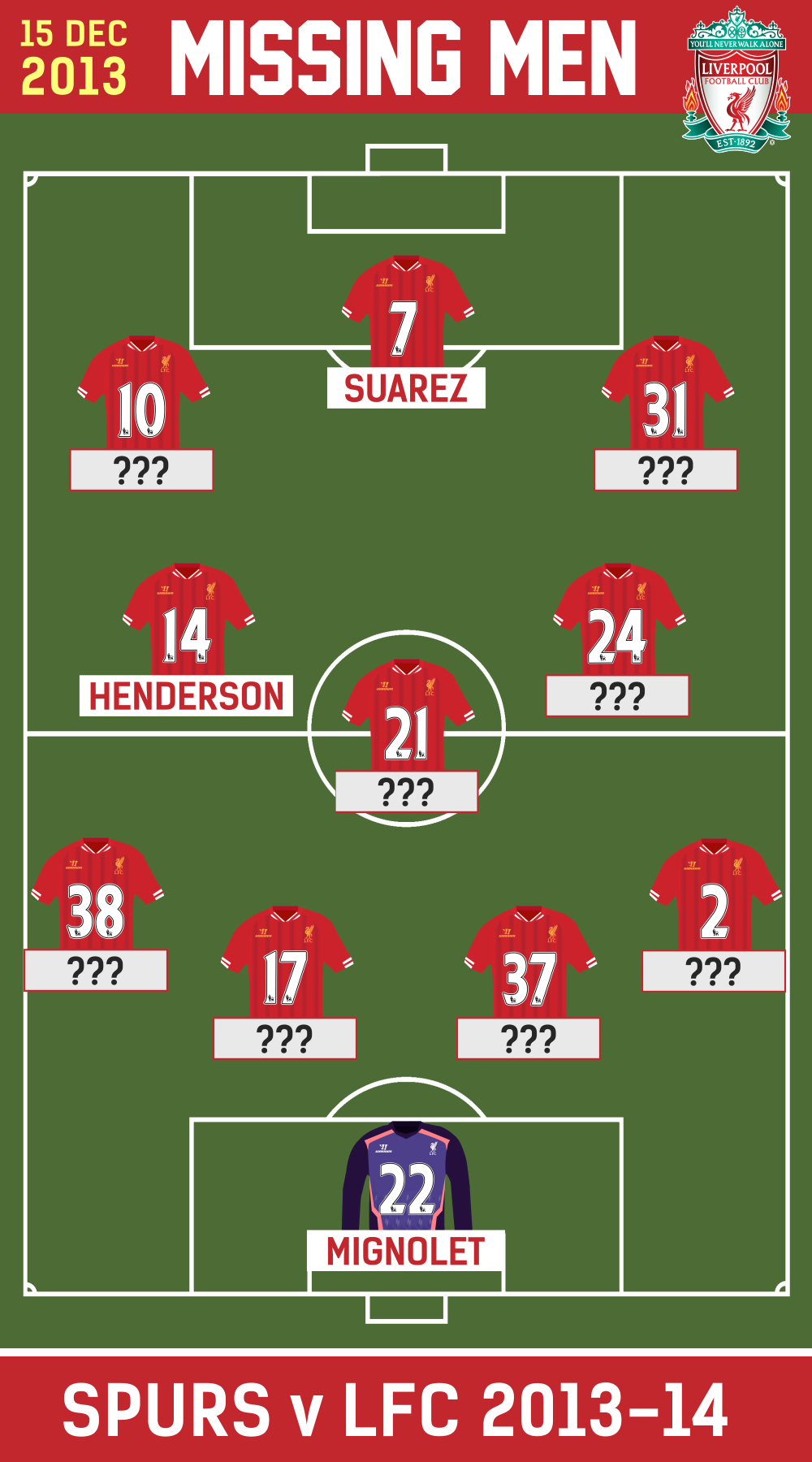 Liverpool can set a new top-flight record with a win at Tottenham Hotspur Stadium.

Victory would move Klopp's team up to 61 points, which would represent the highest total ever achieved in the first 21 games of a season in English football's top tier. 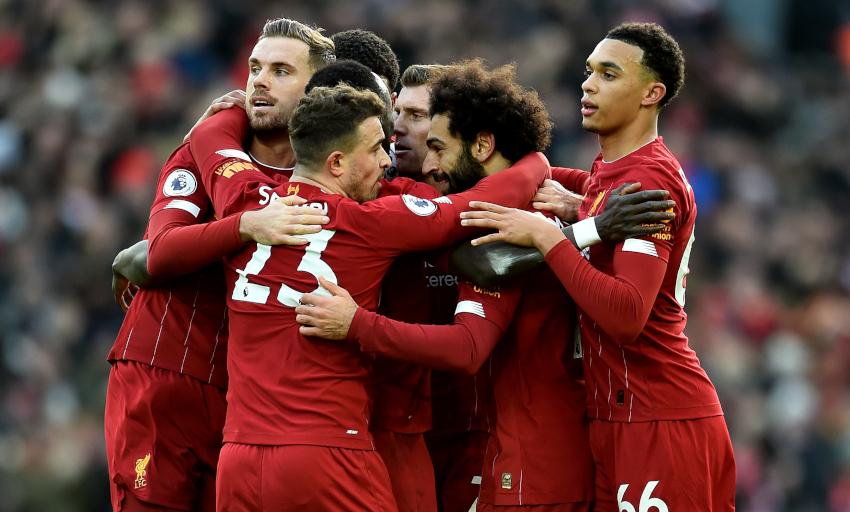 When the sides met at Anfield in October, the Reds recovered from an early concession to claim a 2-1 win through goals from Jordan Henderson and Mohamed Salah... 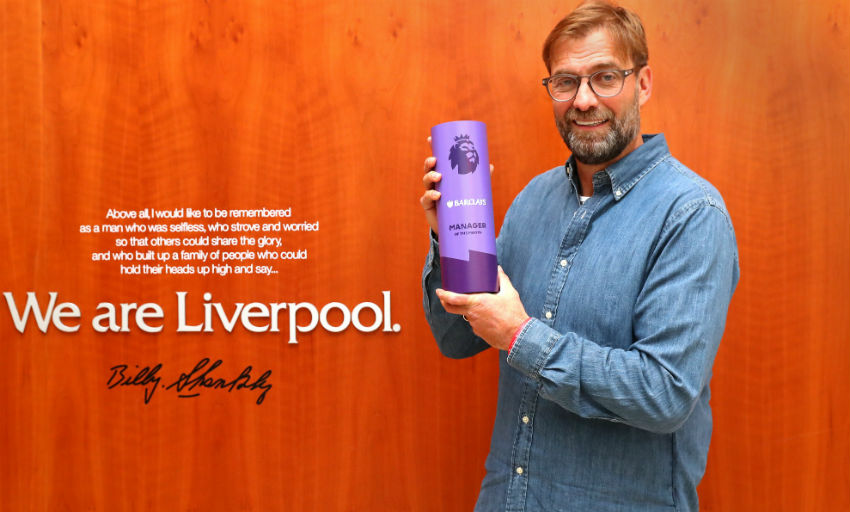 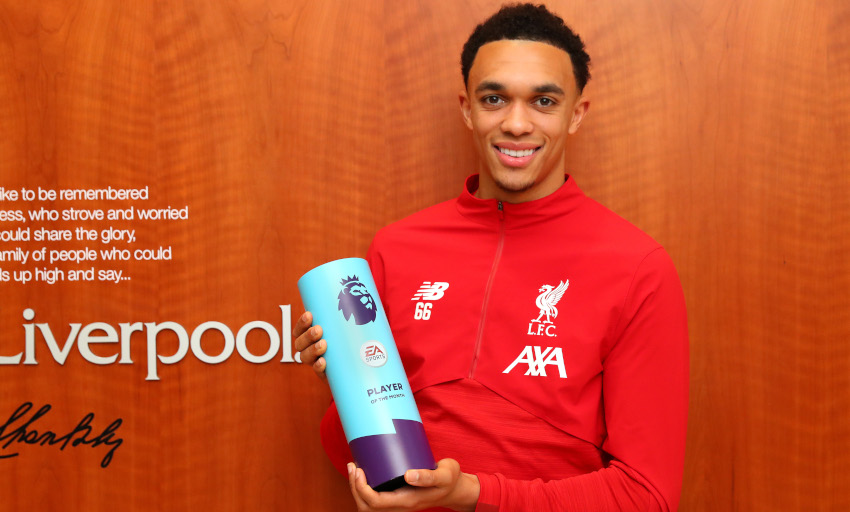 Catch up on everything Jürgen Klopp had to say about the clash with Tottenham at his pre-match press conference on Friday...

So, what do we know ahead of kick-off?

Liverpool have Xherdan Shaqiri back in training, while Joel Matip has also participated at Melwood this week.

James Milner and Naby Keita are ruled out with muscle injuries, while Fabinho and Dejan Lovren won't return to full training until next week. 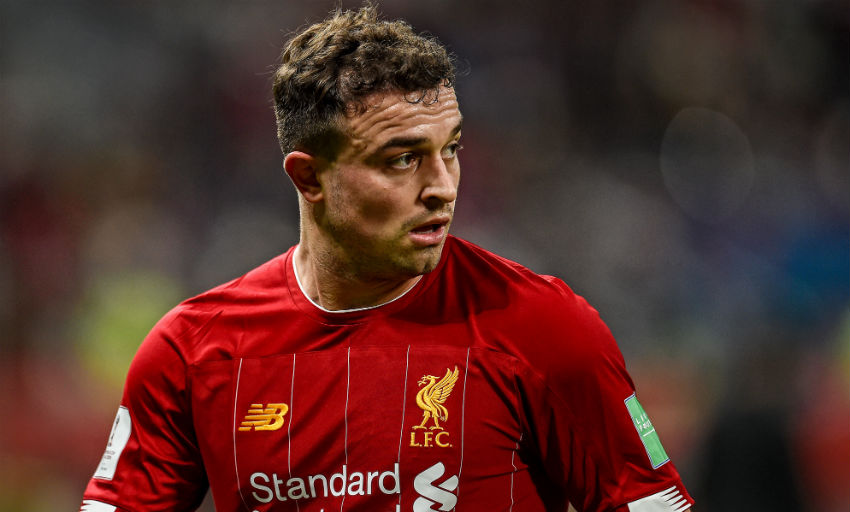 Danny Rose is back in contention, however.

A reminder of how things look at the top of the Premier League table before Saturday's action begins...

Premier League leaders Liverpool resume their pursuit of the title with a much-anticipated trip to Tottenham Hotspur this evening.

You can follow all of the build-up to the clash in the capital right here, before we bring you real-time match updates, photos, videos, reaction and more. 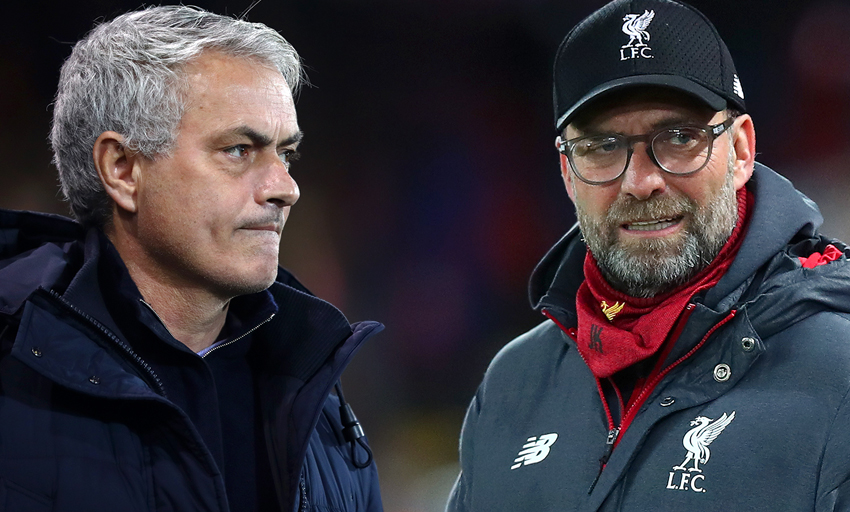