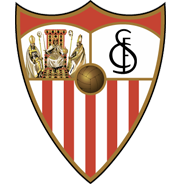 Liverpool were held to a 2-2 draw in their opening Champions League group-stage fixture by Sevilla at Anfield. Wissam Ben Yedder put the Spanish team in front after just five minutes, before Roberto Firmino and Mohamed Salah responded for the Reds, with the former also missing a penalty.

Jürgen Klopp's side continued to create chance after chance in the second half, but Sevilla took a point when Joaquin Correa netted towards the end. The hosts also had Joe Gomez dismissed in stoppage-time for a second yellow card.

Jürgen Klopp has arrived for his post-match press conference...

"It's a results game - we scored twice, they scored twice so it's a draw. I am happy with a big part of the game," says the boss.

"My team showed desire, greed and passion...[but] all respect to Sevilla because they never gave up.

"We created a lot of chances against a good defensively organised side but we didn't use them, that's the truth. But in football it's really important to keep going [and] there's a lot to take from this game that we can build on."

The tale of tonight's game in Opta stats and widgets...

Maribor and Spartak Moscow played out a 1-1 draw in Slovenia.

Liverpool are forced to settle for a point in their opening Champions League group-stage game as Sevilla clinch a 2-2 draw at Anfield.

The visitors took a fifth-minute lead via Wissam Ben Yedder, but that was cancelled out by strikes from Roberto Firmino and Mohamed Salah, with the former also missing a penalty before half-time.

The Reds continued to dominate in the second period, but were undone when Joaquin Correa wriggled free to steer beyond Loris Karius.

Joe Gomez was sent off in stoppage-time for a second yellow card.

Let off for Liverpool as Muriel wriggles free insode the area and shoots...but it's wide.

Wijnaldum loops Coutinho's corner back towards goal, but it's an easy claim for the 'keeper.

Oxlade-Chamberlain is on, Salah is off.

Sevilla sub - Navas off, Corchia on.

Lovren rises to meet Henderson's corner, but loops his header high over the crossbar.

Liverpool make their first change - Philippe Coutinho is on for Emre Can.

And Sevilla are level, completely against the run of play. Correa gets a touch of good fortune to break into the area, but makes no mistake with a calm finish beyond Karius.

Ben Yedder is off and Muriel is on for the visitors.

Wijnaldum smacks a half-cleared free-kick back towards goal, but is denied by smart reflexes from Rico low down at the near post.

Mane spins his man on the edge of the area before shooting over with his left foot.

Gomez is booked for pulling back Correa on the touchline.

Karius distributes the ball quickly to Firmino, who motors forward and uses a run from Henderson as a decoy before striking wide of the post from outside the box.

Sevilla have had their manager Eduardo Berizzo sent to the stands for throwing the ball away from Joe Gomez when the Liverpool defender has gone to take a quick throw in for the second time in the space of 10 minutes or so.

The ball drops so, so invitingly for Emre Can on the half-volley 20 yards out... but his shot cannons against Firmino. Unlucky.

Liverpool have started strongly in the second half... and Anfield has just been treated to the sight of Matip bounding forward and into the Sevilla area from the half-way line. He's crowded out before he can get a shot away, though.

Back up and running

Sevilla re-start the game at Anfield, with the Reds set to attack the Kop in the second half.

The story of a frenetic first half at Anfield in numbers...

Reds lead at the break

Liverpool recover from the early setback of conceding to Ben Yedder to go in 2-1 ahead at the midway point thanks to goals from Firmino and Salah. 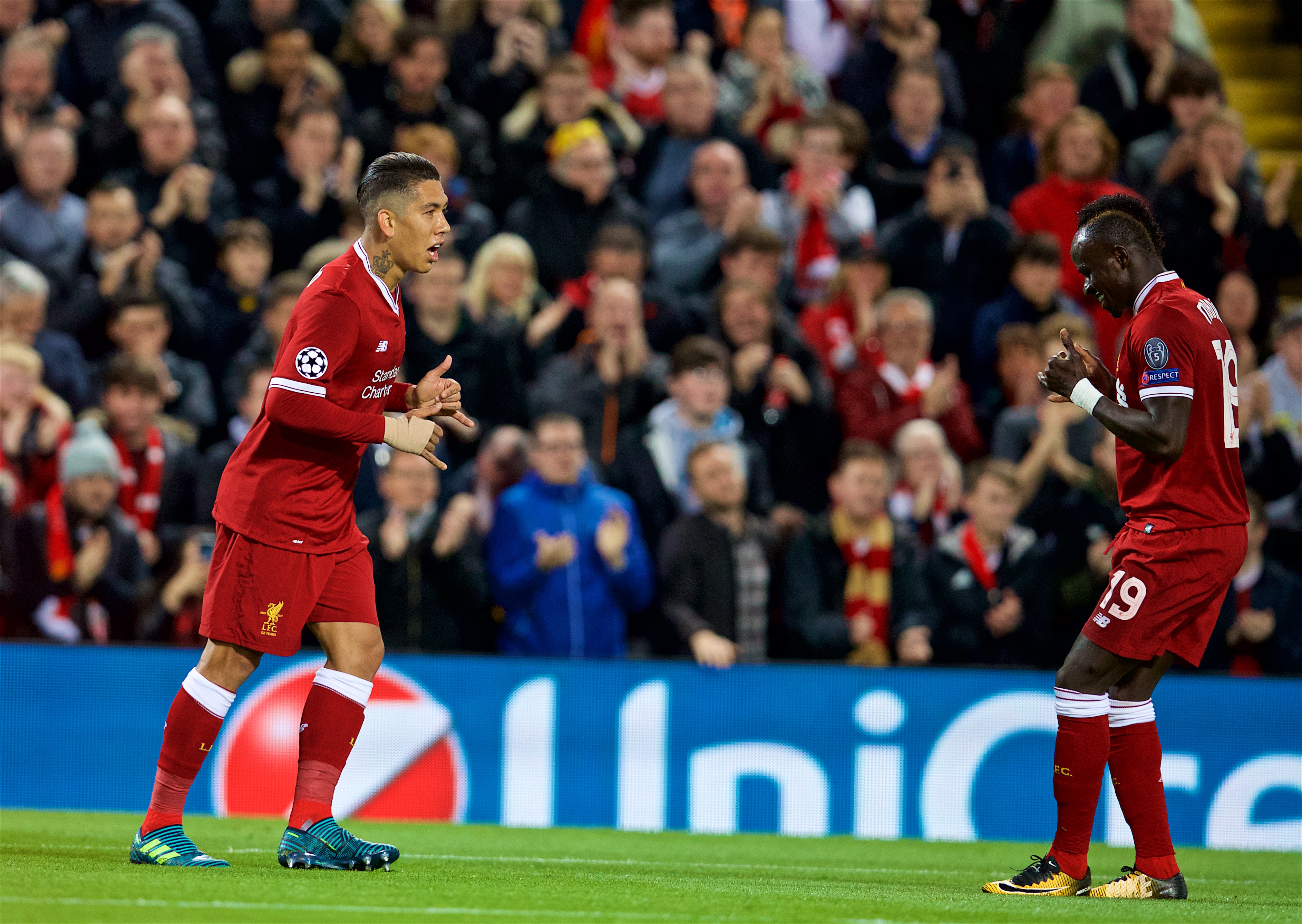 The Brazilian sends the goalkeeper the wrong way but his effort cannons against the post.

Liverpool steam forward at speed once again with Salah leading the change, before Firmino feeds Moreno into space inside the box. He's thwarted by a fine low stop from Rico.

Pareja brings down Mane and the Reds have a spot kick!

Sevilla are forced into a change as Pizarro limps off and if replaced by Sarabia.

Moreno is late on Navas and goes into the book as a result.

Liverpool take a 2-1 lead, although it owes to a touch of good fortune.

There was nothing lucky about Salah's industry to win the ball back, but his shot from range takes a big deflection off Kjaer to wrong foot Rico and loop into the goal.

Mercado goes into the book for a late challenge on Firmino.

The atmosphere is sensational inside the stadium right now.

Liverpool break forward at speed and Mane sends Can through on goal, but he slides wide of the far post with a low effort. So, so close. So unlucky.

Liverpool are level and it's all down to excellent play between Henderson and Moreno, who superbly combine to enable the latter to square for Firmino to tap in the equaliser from yards out.

Firmino rises to loop a header onto the roof of the net from Henderson's corner.

Salah's brilliant run and cross is diverted into the path of Mane, whose sweep towards the near post is turned behind by Rico.

The visitors stun the Reds inside the opening five minutes as Ben Yedder is able to nudge the ball over the line from inside the six-yard box after Lovren failed to connect properly with an attempted clearance on Escudero's cross.

Emre Can registers the game's first shot on goal as he curls goalwards from the edge of the area, but it's an easy take for Rico.

We're up and running at Anfield in our first game of the Champions League group stages as Liverpool kick us off.

A reminder of tonight's line-ups...

Inside the Reds' dressing room 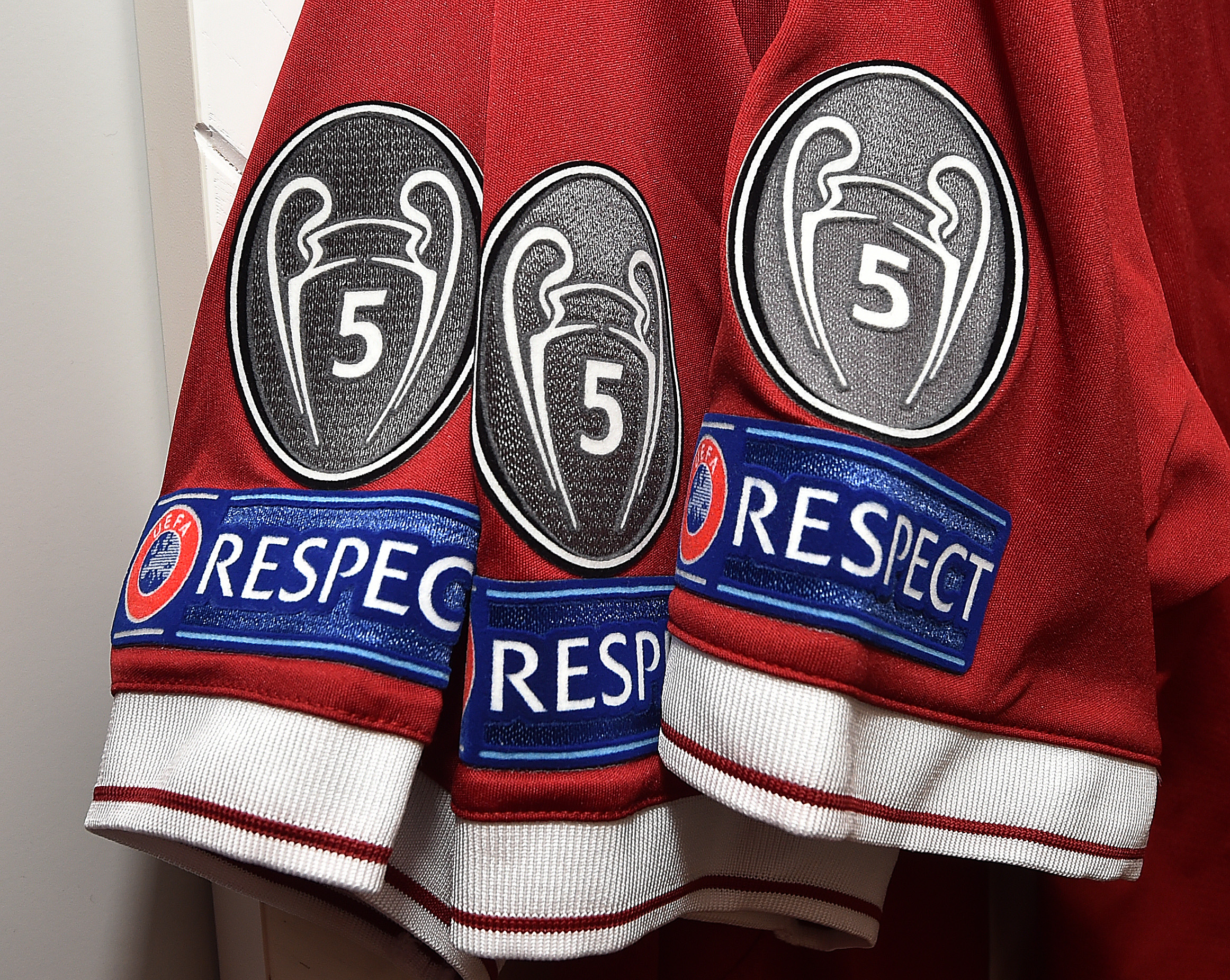 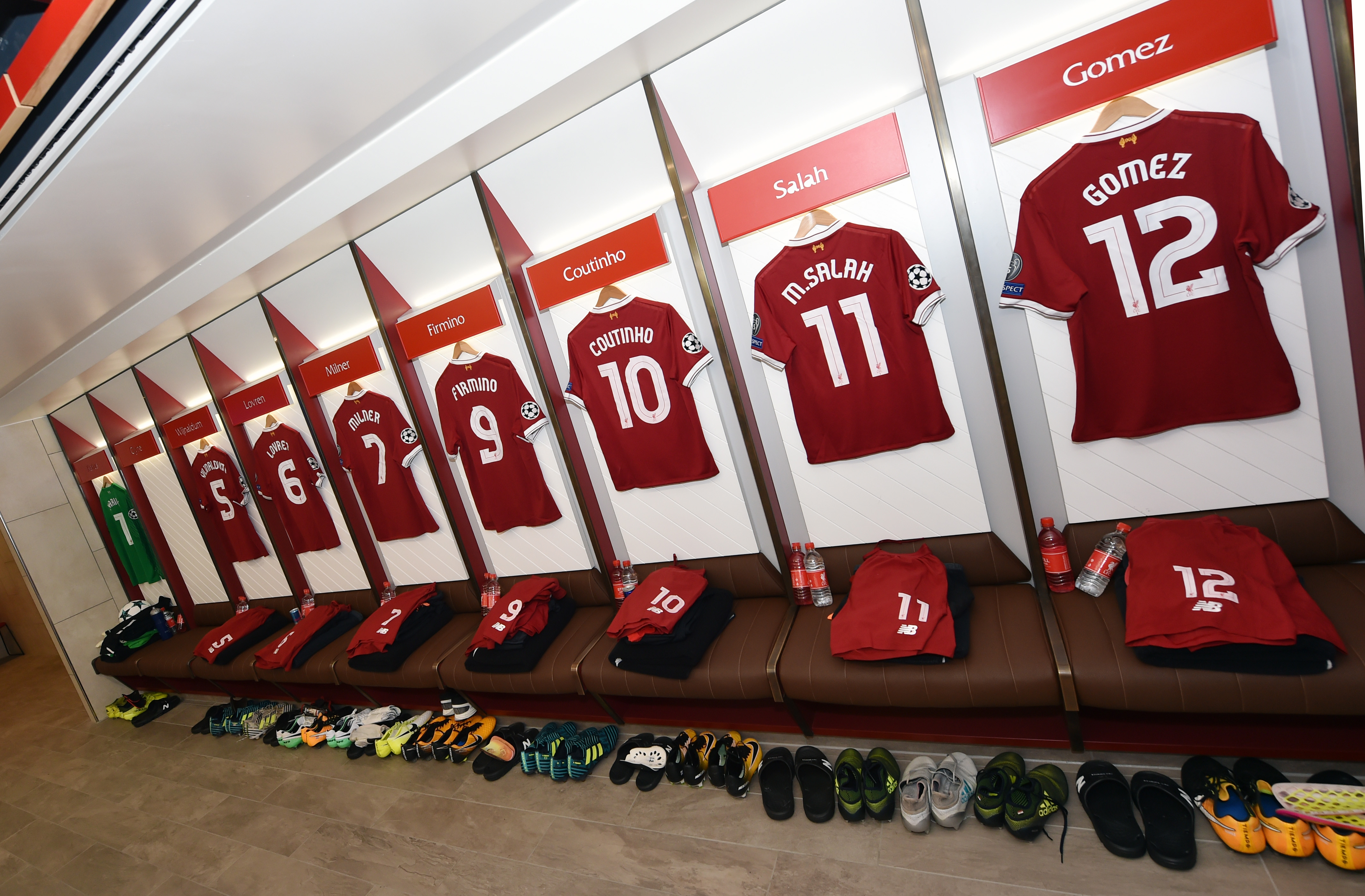 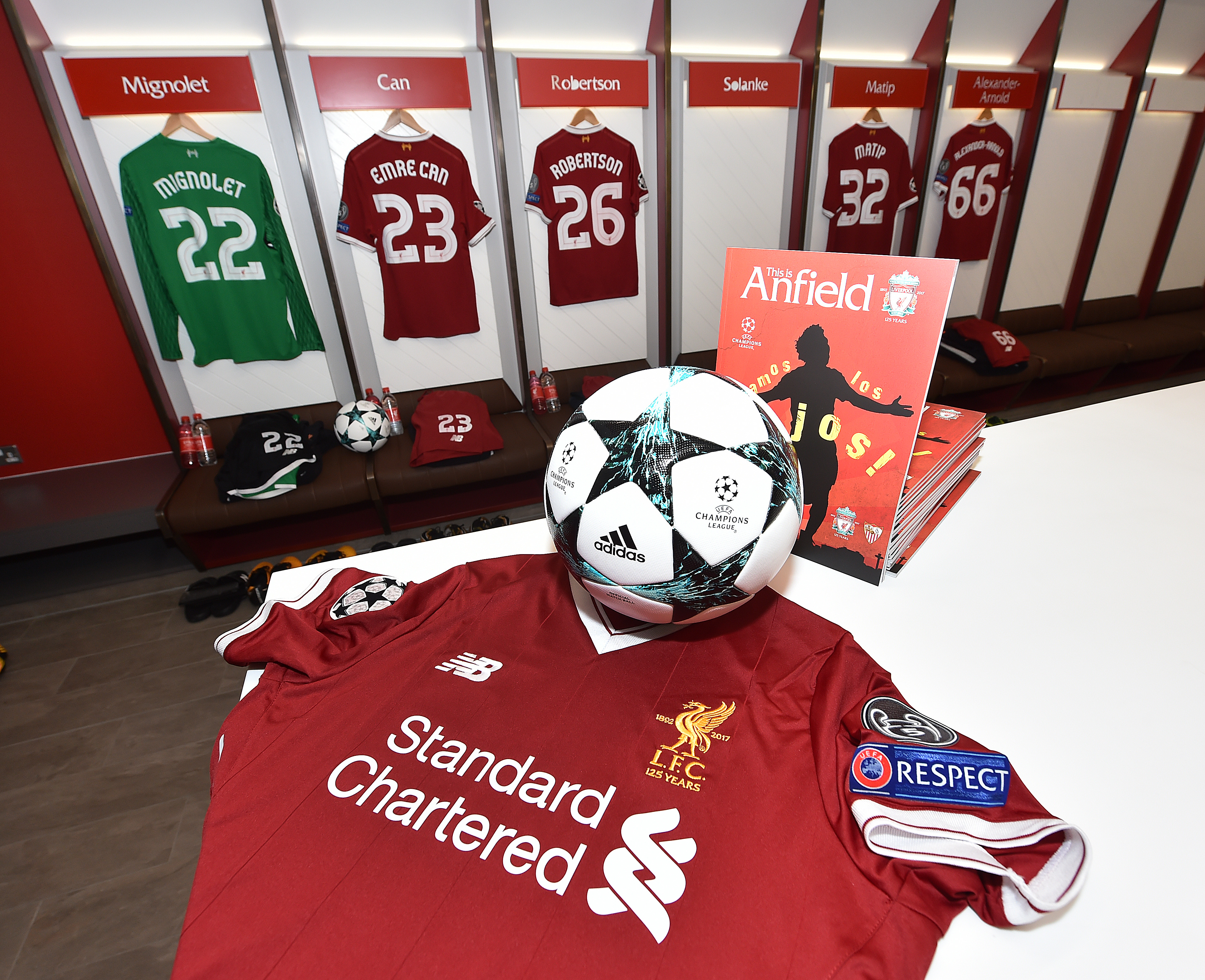 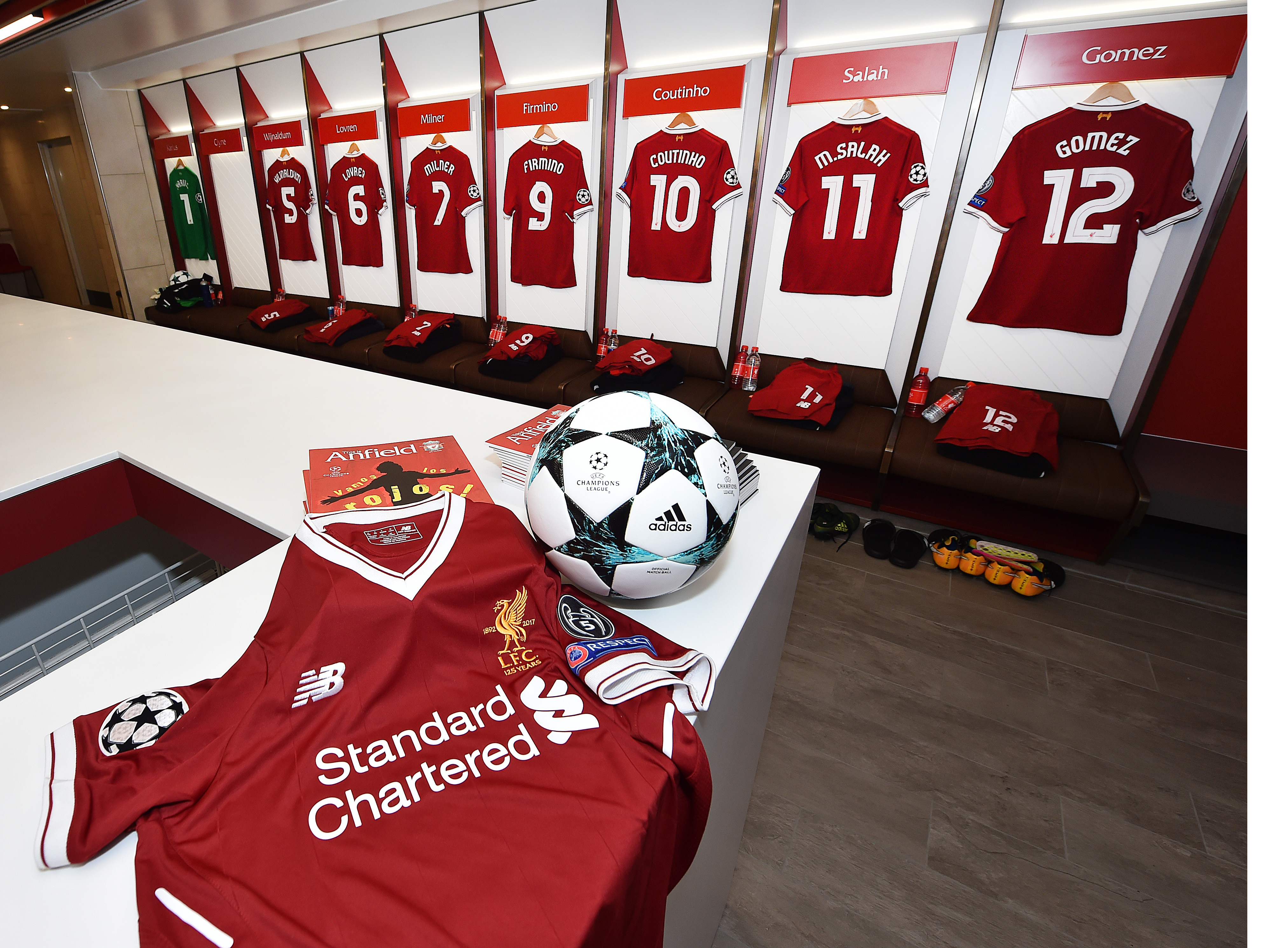 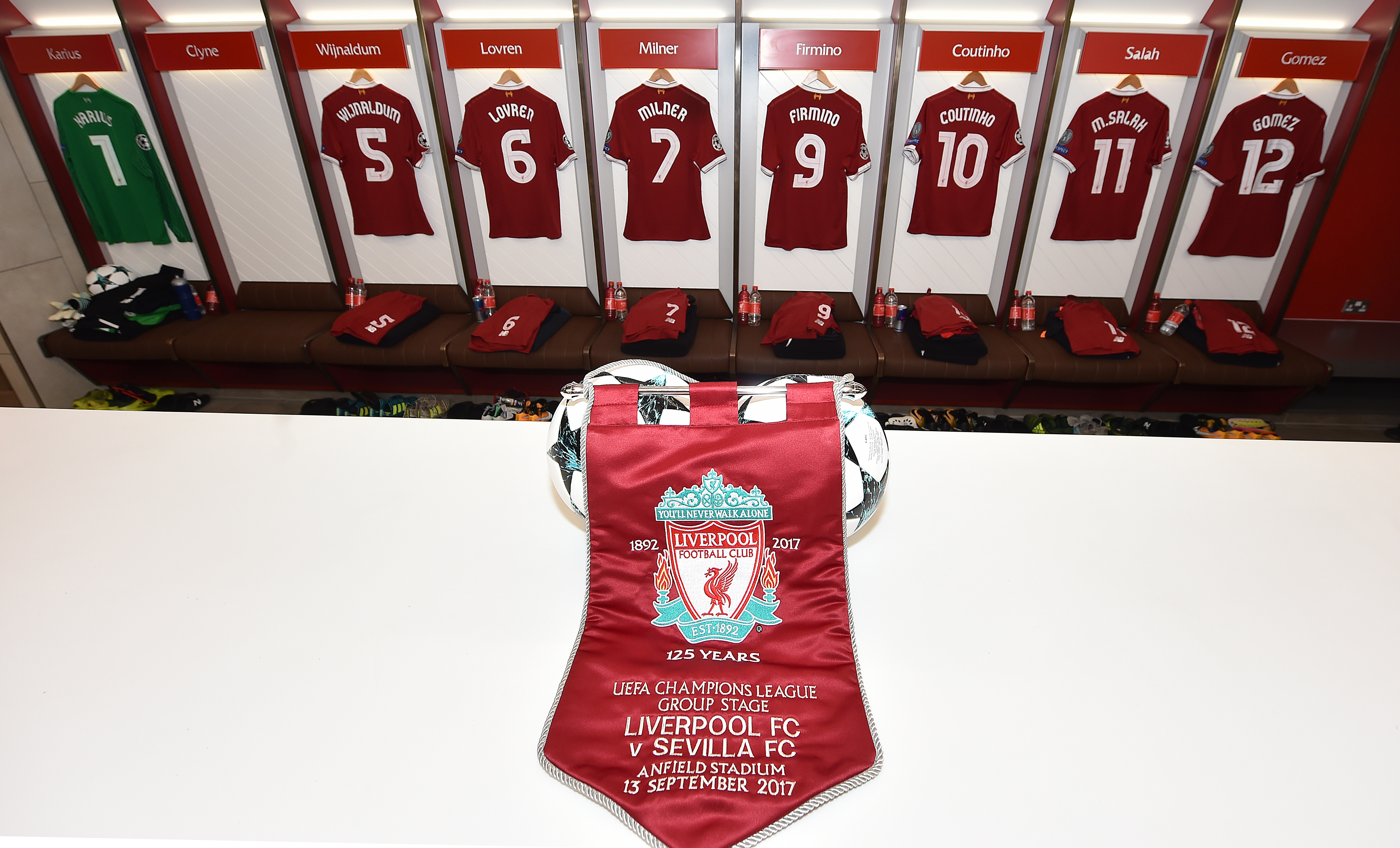 Jürgen Klopp has made three changes to his starting XI for tonight's game, with Loris Karius, Dejan Lovren and Joe Gomez coming in. 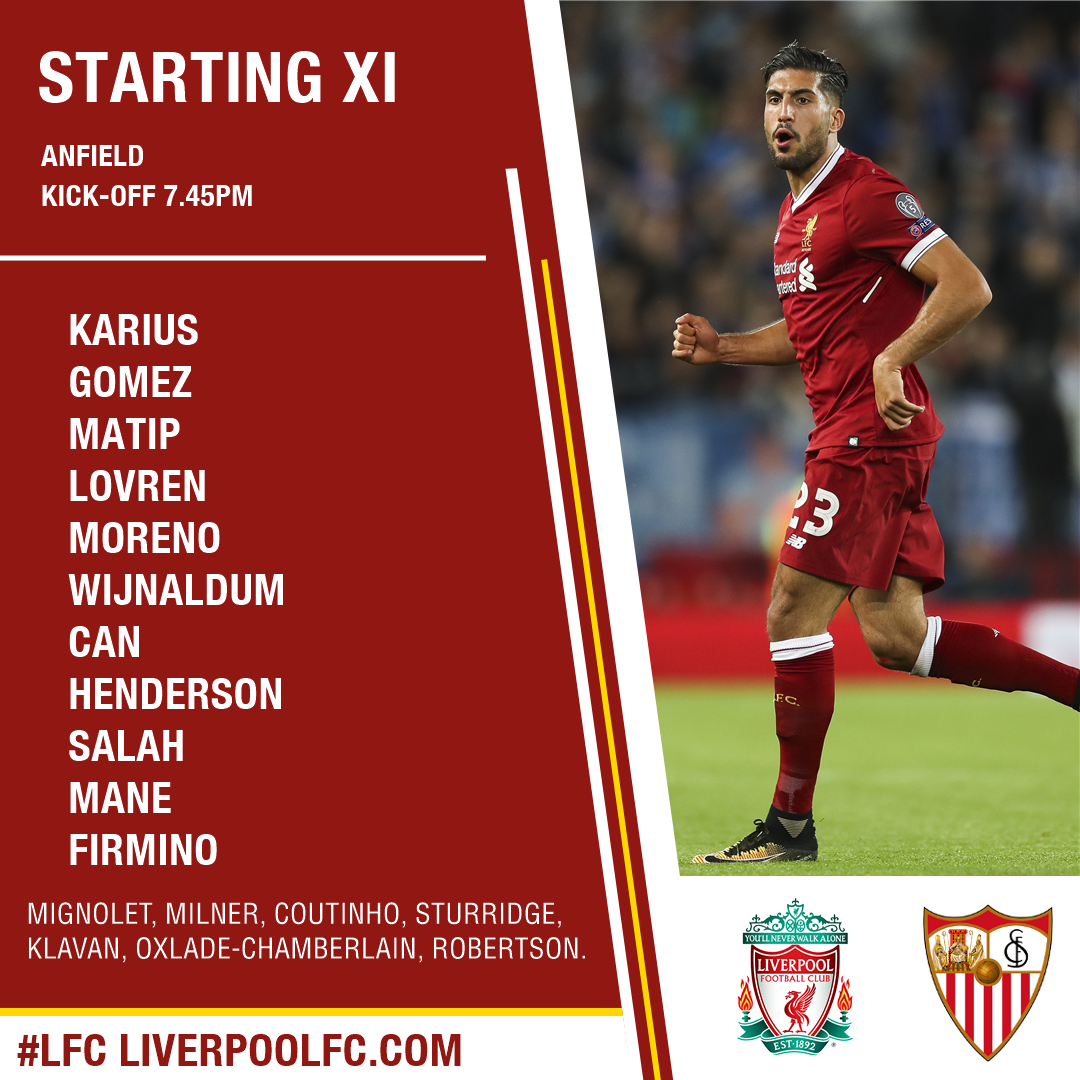 And it's half-time at Prenton Park, where Liverpool's U19s go back into the dressing room with a 3-0 lead over Sevilla.

Two from Curtis Jones and one from Herbie Kane have done the damage for Steven Gerrard's side.

Liverpool U19s have made a flying start to their game against Sevilla at Prenton Park.

Goals from Curtis Jones and Herbie Kane have given them a 2-0 lead as we approach half-time. 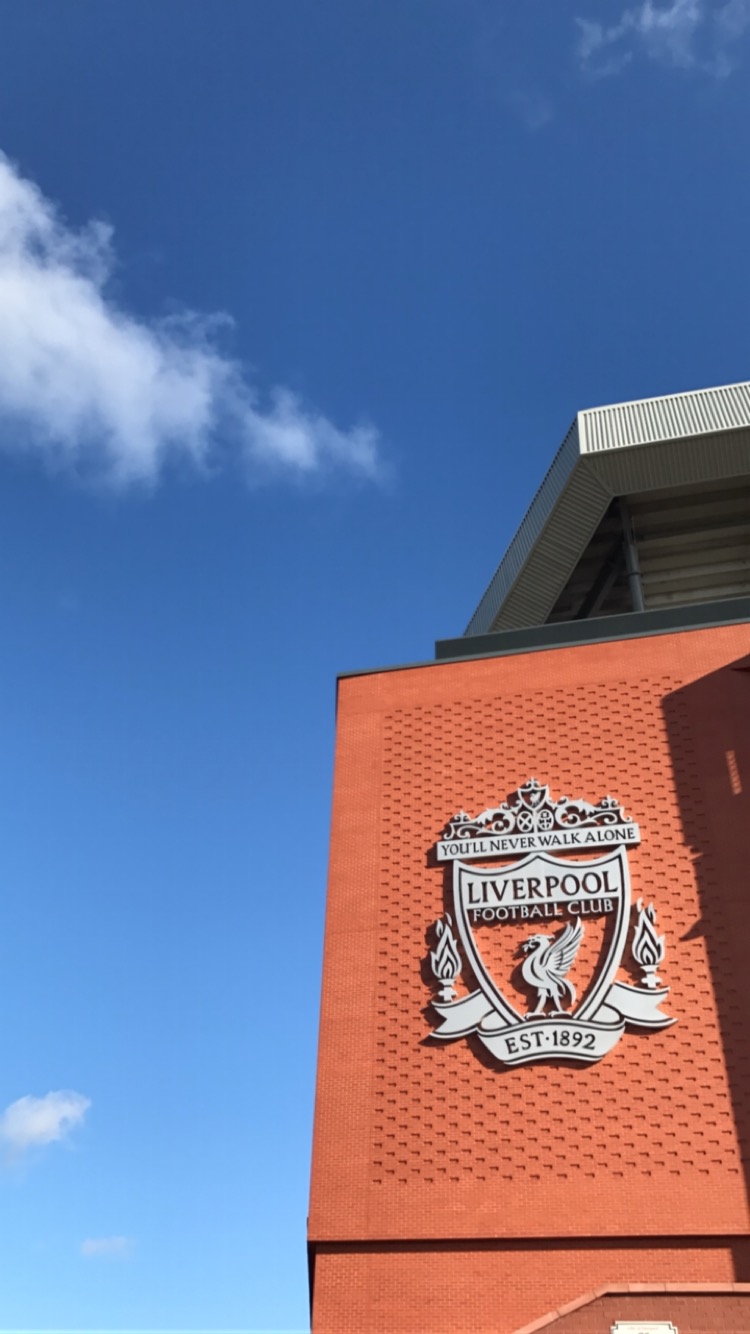 Steven Gerrard surveys the scene at Prenton Park with 15 minutes to go until kick-off in the UEFA Youth League. 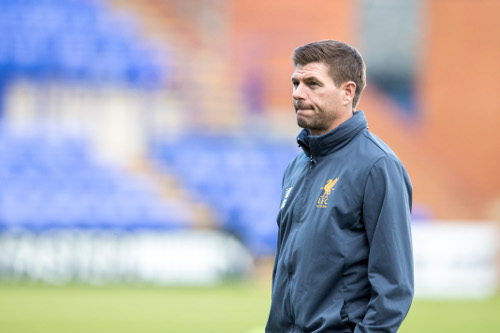 The man pictured below features in the U19s' starting XI this evening. Find out who else is in here. 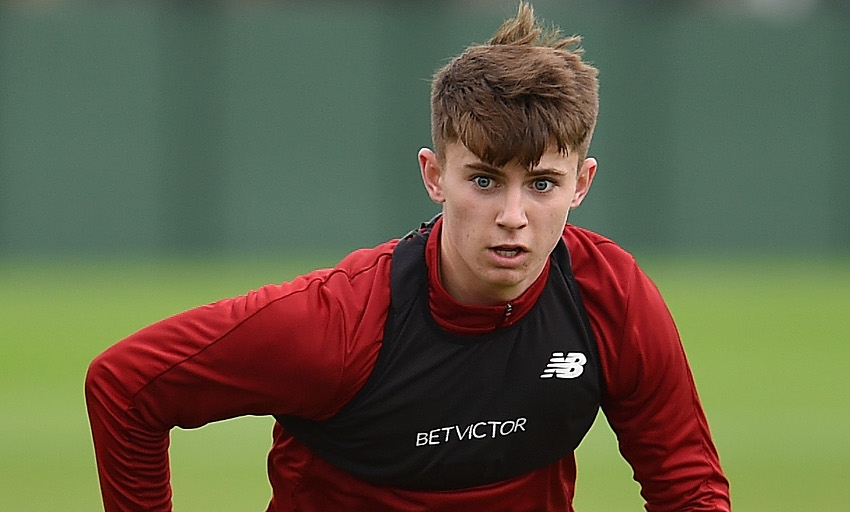 Here are the latest match prices, courtesy of Bet Victor...

Fancy a flutter? Click here to place a bet.

The offering for this game is a special A4 bumper edition, 100 pages, priced £5. Fans can purchase a copy from programme sellers around Anfield, and there will also be a double deal of the latest Liverpool FC monthly magazine and programme for £7.50 - saving £2. 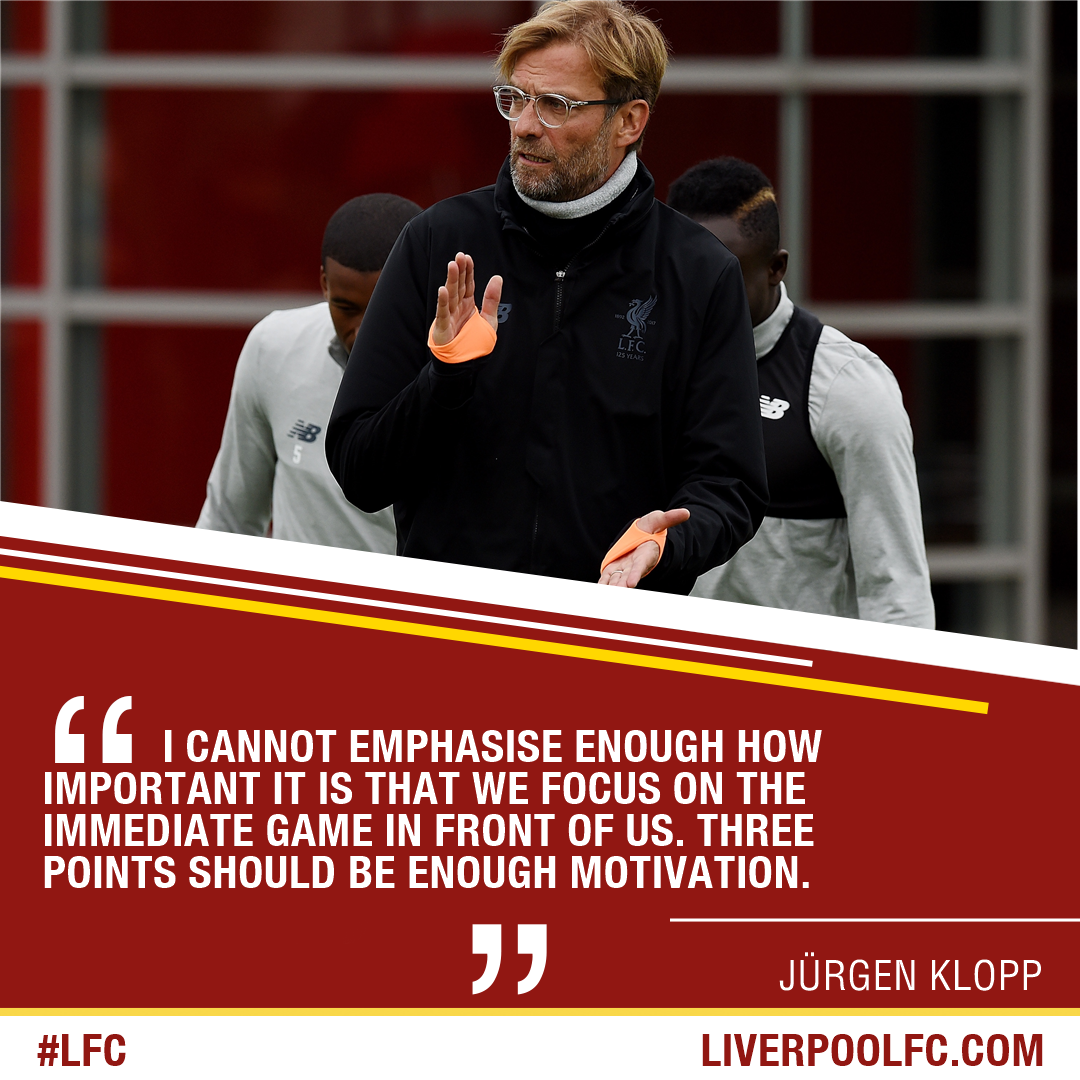 It's not just at Anfield where these two clubs will face off today.

Their respective U19 teams are set to meet in the UEFA Youth League, with kick-off at 5pm BST at Prenton Park. Steven Gerrard will manage the Liverpool side - and you can read our preview here.

We'll also provide updates, photos and a report on Liverpoolfc.com and via Twitter.

If you like a statistic, you are in the right place. Here are a couple of choice facts ahead of the contest...

The club has confirmed that tickets for the tie are now sold out. Supporters not in possession of a ticket are urged not to travel to Anfield, while those in the Auto Cup Scheme should check their seat has been processed by logging in here.

An expert view on Sevilla

If you want to know more about the test Liverpool are likely to face against Sevilla, listen to the analysis of Rob Palmer - La Liga commentator for Sky Sports - in our clip below...

If you are attending the game tonight, please take note of some important information with regards to getting to, and getting into, the stadium by clicking here to read our guide.

Also, please be aware of the notice issued by Merseyside Police below.

It has been a rainy, blustery few days on Merseyside, though the sky is currently brightening up a touch over Anfield as kick-off approaches. Temperatures are unlikely to be warm enough to risk not wearing a coat if you're heading to the ground, however.

The Reds continued preparations for the game with a session at Melwood on Tuesday. Here is a selection of our favourite photos from the workout... 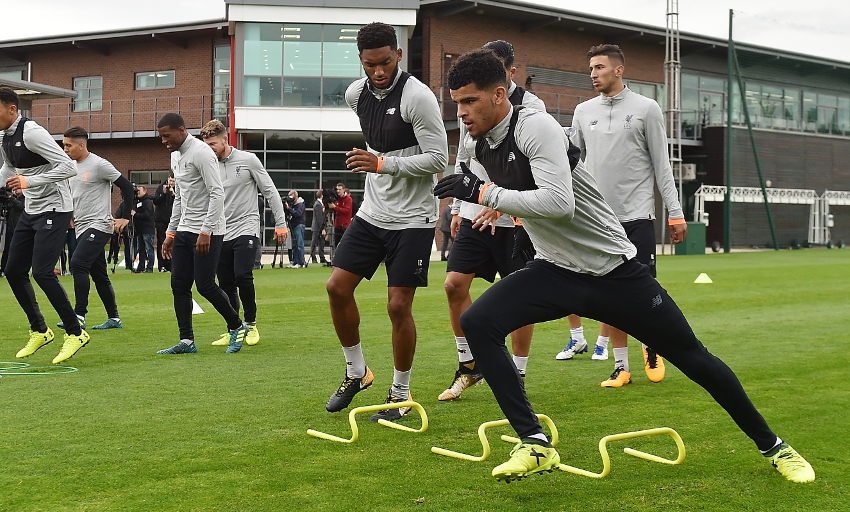 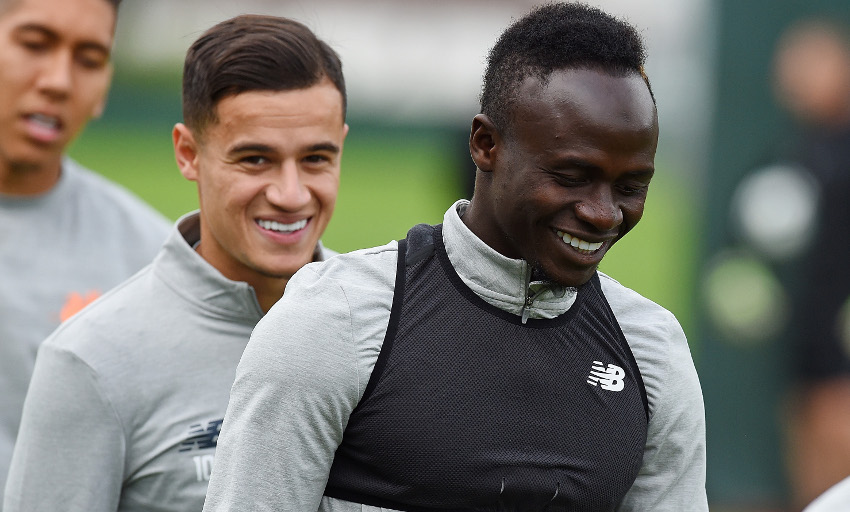 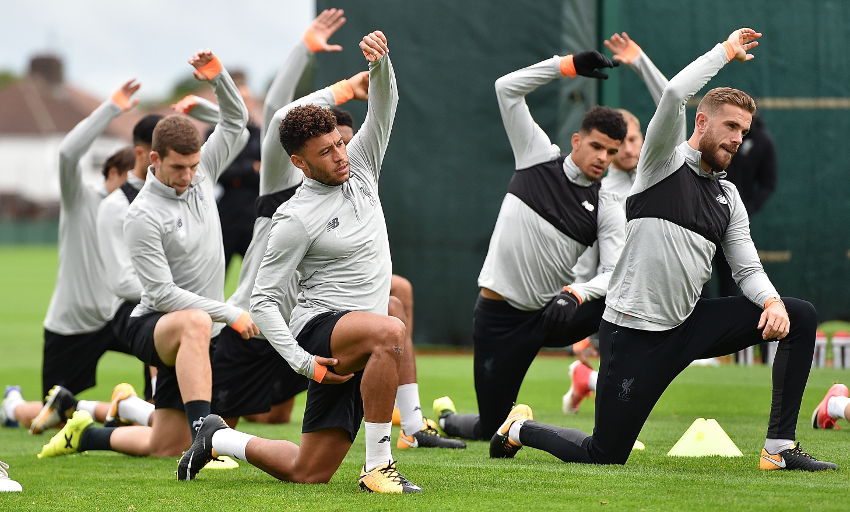 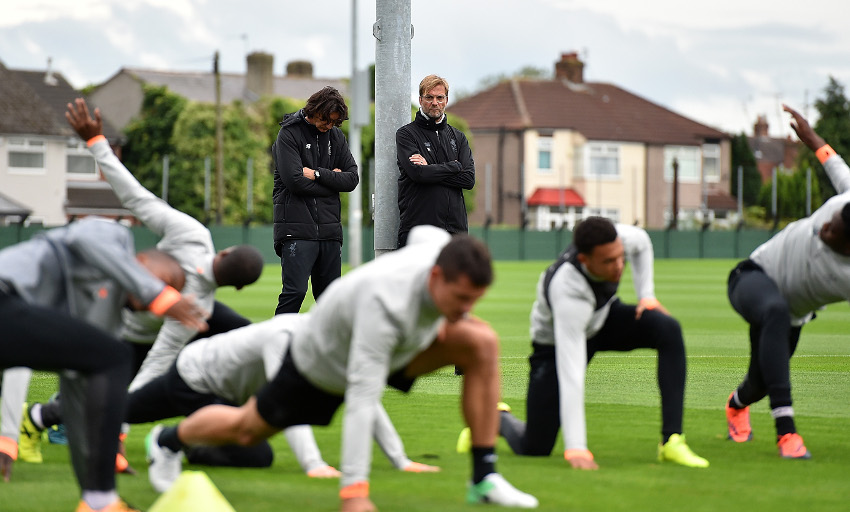 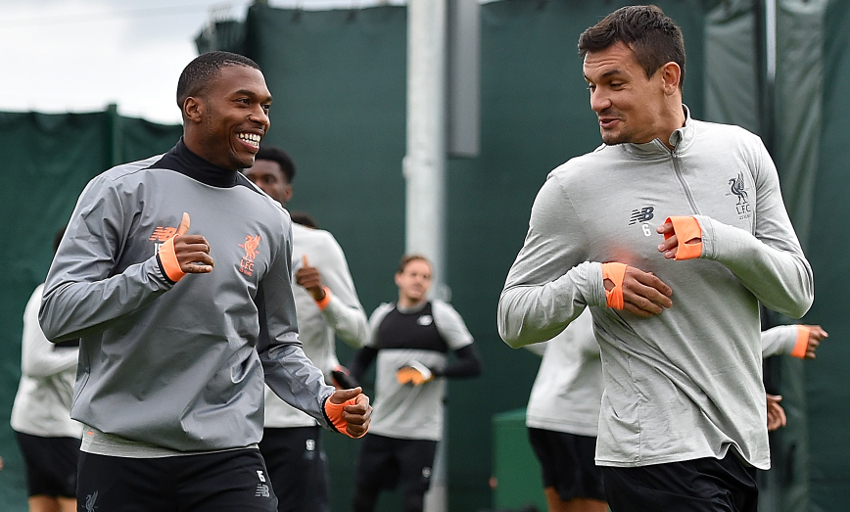 Fancy a sneak peek at tonight's match programme cover? Of course you do.

It's a Spanish-themed Reds rallying cry on the front page...

Get yours at the ground or online here. 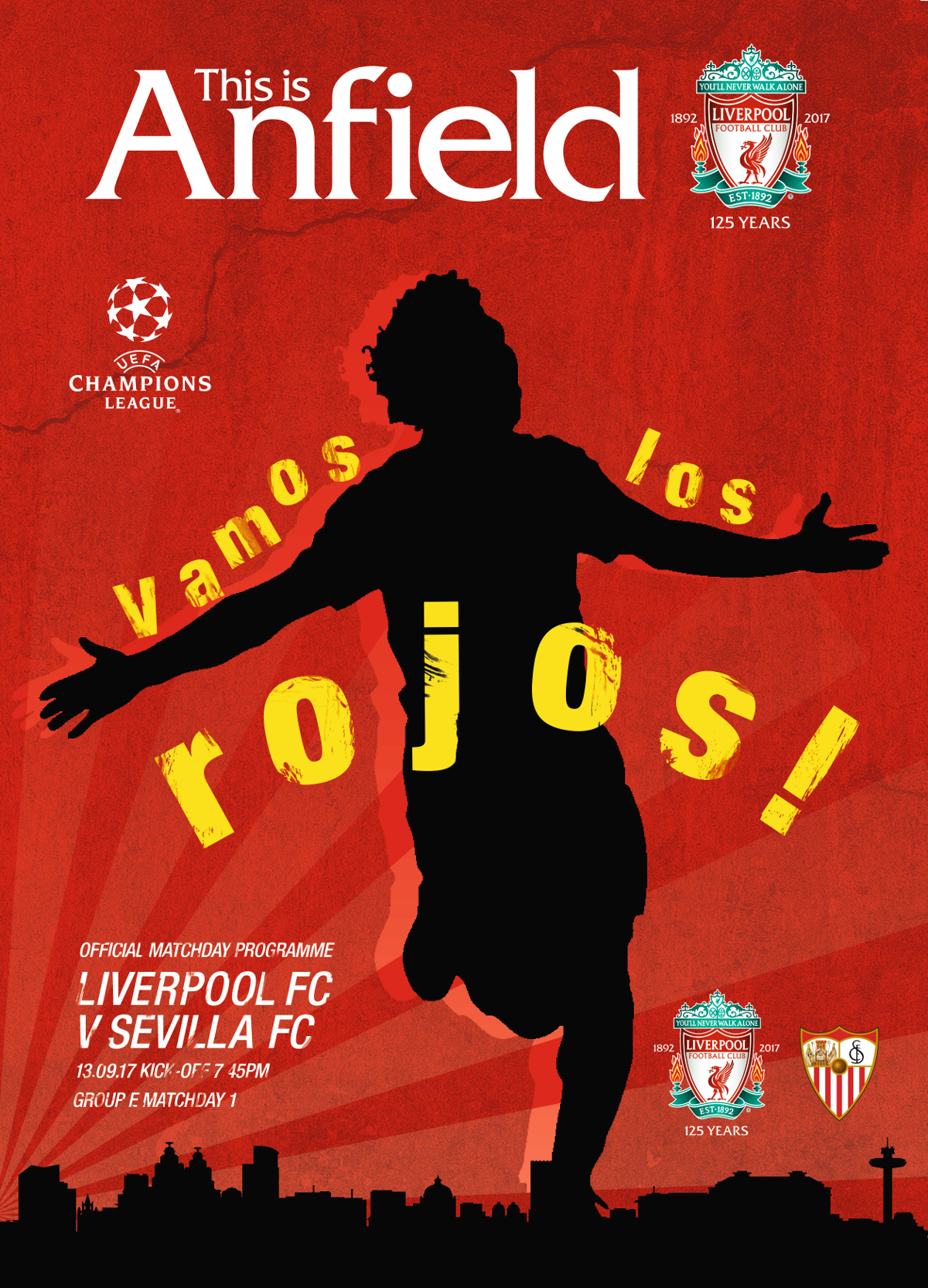 See everything Klopp had to say at his Anfield news conference via our official YouTube channel below. The boss was joined by Joe Gomez in speaking to the media ahead of the tie.

Changes may be afoot in the manager's starting XI this evening.

Loris Karius is set to be in goal, Klopp confirmed at his media briefing on Tuesday, while Mohamed Salah is expected to be fit despite missing training with illness.

The boss also explained that Philippe Coutinho is 'fit and healthy' but stopped short of revealing whether the Brazilian will feature against Sevilla.

We'll have the line-up for you before anywhere else from 6.30pm BST.

Liverpool return to the Champions League proper this evening and you can follow every bit of action at Anfield right here in our matchday blog.

The Reds' Group E campaign begins where their 2015-16 Europa League pursuit ended - with a tie against Spanish side Sevilla.

It's sure to be an entertaining - and hopefully successful - European night under the floodlights, so stay with us throughout for comprehensive build-up, live updates on the game and reaction.