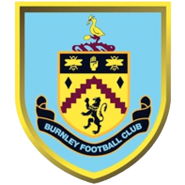 Liverpool were held to a 1-1 draw by Burnley at Anfield on Saturday afternoon.

Scott Arfield put the visitors ahead against the run of play midway through the first half, but Mo Salah equalised for the Reds almost immediately.

Jürgen Klopp's team dominated the game from first whistle to last, with Dominic Solanke hitting the bar late on, but they were unable to force a winner.

"It feels strange, it feels wrong, but it’s a fact – we drew. A lot of parts of the game I was really happy with. We made seven changes but it was still really fluent, it looked like proper football – offensive football, dominant football, possession football how it should be." 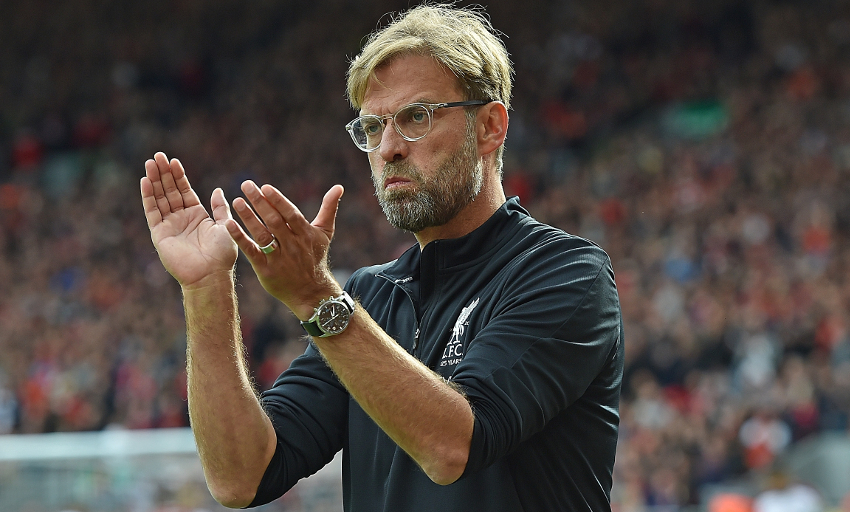 That's it here at Anfield after a frustrating afternoon for Liverpool.

Arfield gave Burnley the lead against the run of play, but Salah equalised to make sure the Reds went in level at half-time.

The hosts dominated the second half, but couldn't find a way through. Solanke came closest when he rattled the bar from close range late on.

Trent unleashes a left-footed volley from Milner's cross which Pope scrambles over to save.

Matip clears off the line from Mee's header, then Mignolet makes a good save from the Burnley centre-back from Robbie Brady's corner.

Double substitution for Liverpool, with Oxlade-Chamberlain and Solanke coming on for Firmino and Coutinho.

Can nods Milner's cross onto the roof of the net.

Just under 20 minutes remaining here. Can the Reds force the breakthrough?

A brilliant piece of play from Firmino and Sturridge ends with Milner's volley being blocked.

Pope turns Sturridge's powerful shot wide but the resulting corner comes to nothing.

Pope goes into the book for time-wasting.

More pressure from Liverpool and Can forces Pope into a save with a low blast from 20 yards.

Coutinho weaves his way through three or four Clarets players but then shoots over the bar.

Liverpool on top in these early stages of the second half.

Sturridge has just tried to emulate his wonderful chip against West Brom here in 2013-14...but the ball floats over Pope's bar.

And we're back under way...

Here are the latest odds, courtesy of Bet Victor.

Peruse the key Opta stats of that first half below...

There's the half-time whistle, and it's all square at the break.

Liverpool dominated the entire half, but Burnley's only meaningful attempt on goal saw them go ahead through Arfield, before Mo Salah equalised with an excellent finish.

Salah curls an effort straight into Pope's arms after Coutinho and Firmino played about four one-twos with each other.

Can the Reds get in front before the break? 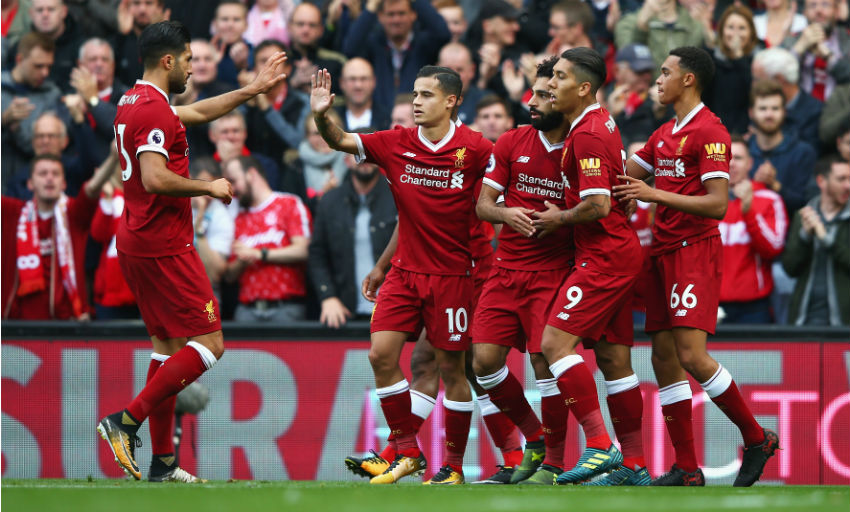 Sturridge is so, so close to making it 2-1 as Milner's dangerous delivery just evades him in the centre.

The Reds well and truly on top.

An immediate response from the Reds as Salah takes Can's lofted ball down and finishes with aplomb.

Burnley's first shot on goal sees them go ahead through Scott Arfield.

Salah involved again, as he drifts to the back post and attempts to head Sturridge's cross home but can only nod over.

Salah twists and turns in the area and thinks he's been brought down, but the referee waves his appeals away.

More of the same here at Anfield - the Reds are probing but, understandably, are finding it tough to break Burnley's packed defence down.

Feels like patience is going to be key for Liverpool today.

The pattern of the game seems set already: Liverpool are dominating the ball, with Burnley happy to sit deep.

Alexander-Arnold's just fired wide with his left foot as the Reds continue to push on.

A slight delay here after Klavan and Wood clashed heads.

Fortunately, both are fine to continue.

Sturridge scuffs his shot from Robertson's cross from the left. A bright start from the Reds.

We're under way, with the Reds kicking towards the Kop in this first half.

Inside the home dressing room... 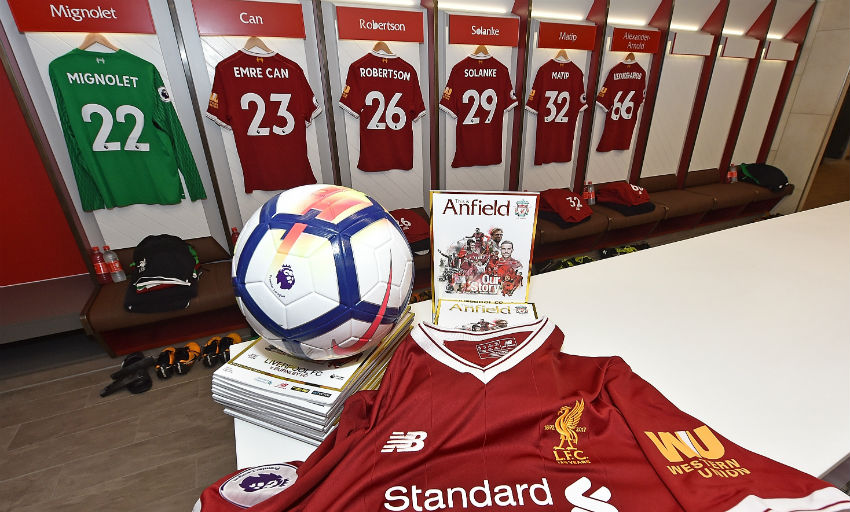 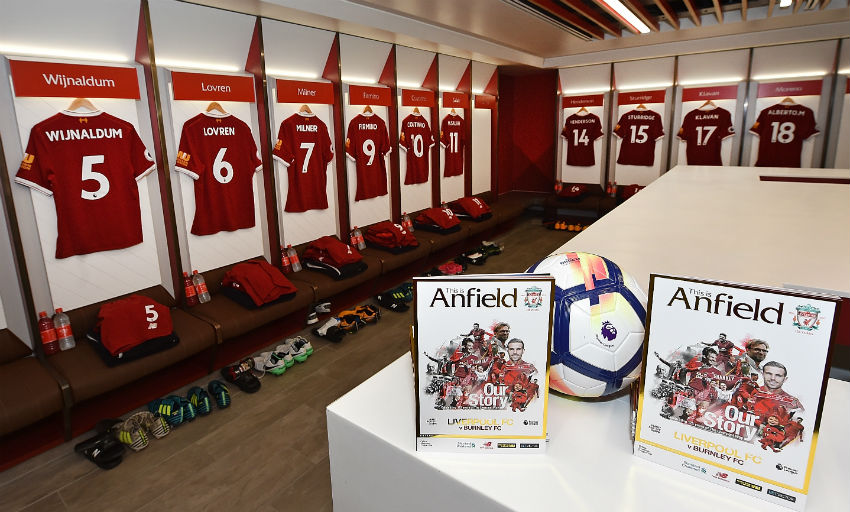 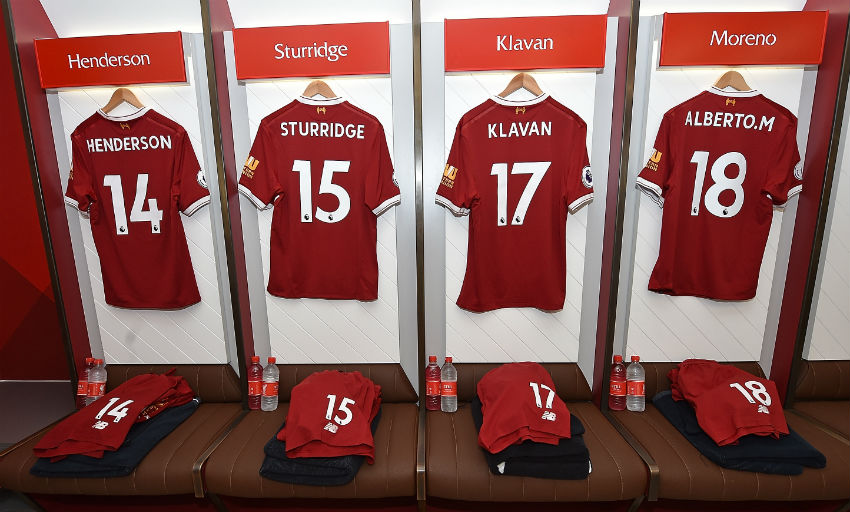 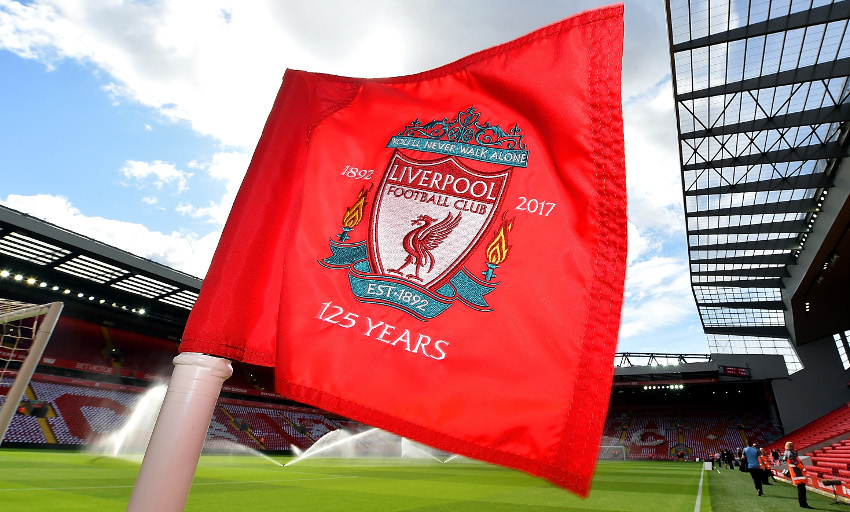 Liverpool make seven changes to their line-up for this afternoon’s Premier League clash with Burnley from the midweek draw against Sevilla.

Philippe Coutinho comes in for his first start of the season.

Trent Alexander-Arnold speaks to the media pre-match at Anfield. 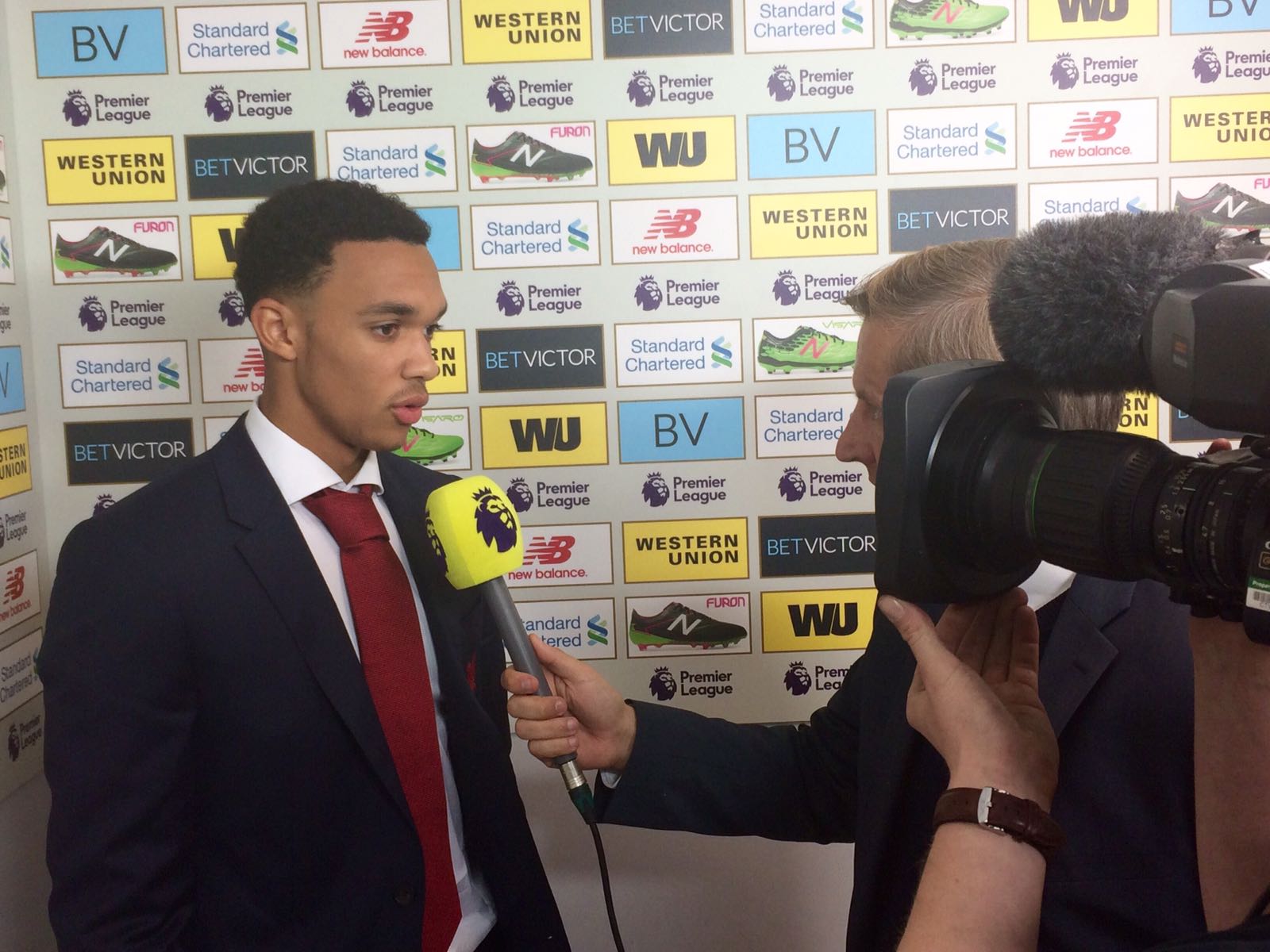 An extra-special edition of the match programme today marks the 125 celebrations, including a delightful gold trim. One to keep, we think. 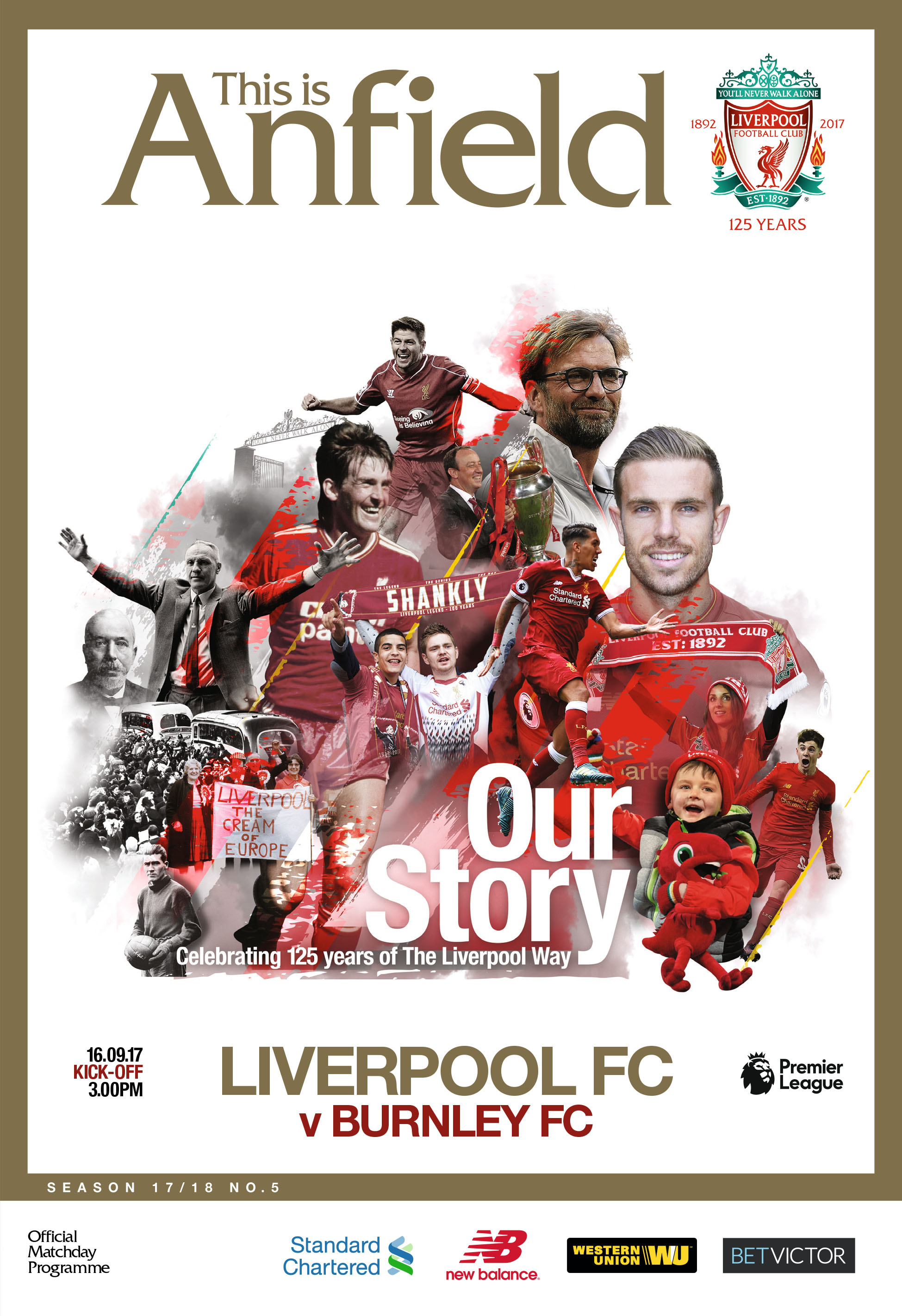 This is Our Story...

Take advantage of those match odds with BETVICTOR here.

...check out this brilliant animation of our first ever game below if you haven't already.

Today's game will celebrate 125 years of Liverpool Football Club with a series of special events in and around Anfield.

The Fan Zones will host live music and a 125-themed Q&A with club legends in the build-up to the match.

There will also be a special mosaic displayed prior to kick-off, LFC Foundation activities at half-time, and other commemorative touches at the Reds' home ground.

Georginio Wijnaldum could make his 50th appearance for Liverpool today if he figures against Burnley. 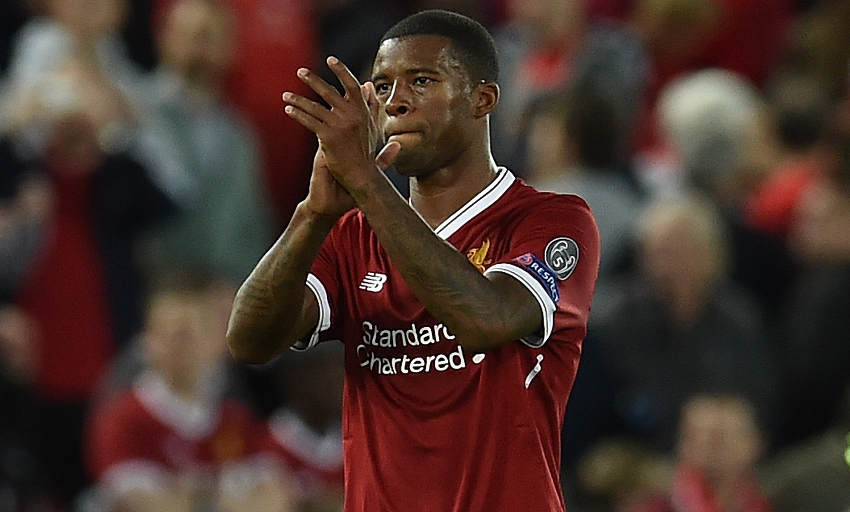 It was something of a GOALATHON at Melwood on Thursday as our cameras captured a series of netbusters during training in the warm-up to today's game.

If you're an LFCTV GO subscriber, you can savour them below now...

So, Sadio Mane begins a three-match suspension today. How will Liverpool manage without the livewire No.19? 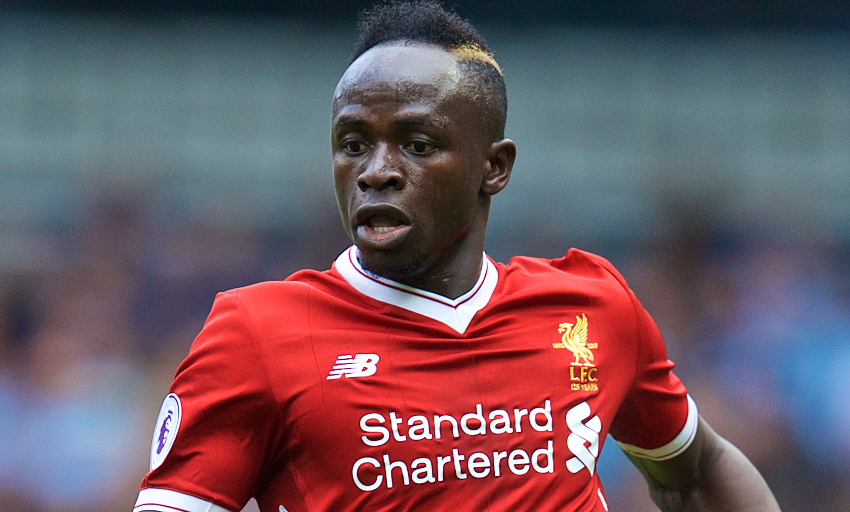 It's a beautiful morning on Merseyside; the sun is shining and it's a pleasant 12 degrees.

Beware, however, rain is forecast for around 5pm, so if you're journeying to Anfield today, come prepared for precipitation.

Missed Jürgen Klopp's pre-match press conference? Catch it in full in our YouTube video below...

Hello and welcome to our latest live matchday blog as Liverpool take on Burnley in the Premier League at Anfield today.

After defeat at Manchester City and the midweek Champions League draw against Sevilla, the Reds will be aiming to bounce back to winning ways against the Clarets - but it'll be no easy task against Sean Dyche's side who've enjoyed a fine start to the campaign.

So stick with us throughout the day for all the news, views and action, as well as occasional weather updates.