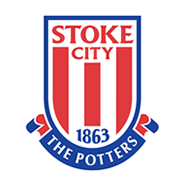 Liverpool claimed a vital 2-1 win over Stoke City thanks to second-half goals from substitutes Philippe Coutinho and Roberto Firmino.

The Reds remain in third place in the Premier League.

Klopp: "Simon Mignolet made two outstanding saves. The second was one of the best saves I've ever seen."

Klopp: "At half-time we had a difficult decision to make. It was not clear if Phil or Roberto could play 45 minutes."

Jürgen Klopp has arrived for his post-match press conference

"A really important win in difficult circumstances for us," says the boss.

Great team effort and spirit @LFC and the REDS support was amazing! YNWA they all supported the lads ! Great Win !! https://t.co/ePZbirbpFV

Take in all the stats from a dramatic afternoon at the bet365 Stadium with the interactive Opta widgets below...

Liverpool have claimed a huge three points thanks to a fantastic second-half comeback.

Down 1-0 at the break, Jürgen Klopp turned to Phil Coutinho and Roberto Firmino on the bench - and the Brazilian duo produced a wonderful finish apiece to turn the game around.

A classy move involving Wijnaldum, Coutinho and Sturridge ends with the striker being denied a shot on goal by a last-ditch clearance.

Fantastic football from Liverpool, that.

Adam is replaced by Ramadan for Stoke

It's settled down a bit now after that crazy two-minute spell that saw Coutinho and Firmino turn the game on its head. Not a bad couple of subs to have, those two!

Simon Mignolet made his second wonderful stop of the afternoon shortly after Firmino's goal, somehow denying Berahino from no more than five yards.

And now Firmino's got in on the act, with a wonderful dipping finish!

Finally!! It's nothing less than the Reds deserve and it's Coutinho who's got it, with his third goal in as many games.

It was some finish, too, as he reacted quickest to fire home a loose ball

Daniel Sturridge is on for Divock Origi, while Whelan has replaced Walters for Stoke.

Wijnaldum fires wide with a left-footed effort from the edge of the area.

Lovren hits the bar with a header from Coutinho's corner.

And Grant now has to repel a curling, first-time effort from Coutinho from 20 yards.

Liverpool are really pressing for the equaliser, here...

Now Grant palms away a half-volley from Firmino, and Matip nearly gets on the end of Lovren's header from the resulting corner.

Much better from the Reds.

Then Origi curls an effort wide at the other end after good work from Coutinho.

Liverpool looking more dangerous going forward in this second half.

That's a brilliant, brilliant save from Simon Mignolet.

A Stoke corner creates confusion in the Liverpool box, but the Belgian denies Adam with a fantastic stop from close range.

Both Roberto Firmino and Philippe Coutinho are on for Liverpool, with the Brazilians replacing Trent Alexander-Arnold and Ben Woodburn.

Take in the stats from that first half, courtesy of Opta, below...

Here are the half-time odds, courtesy of Bet Victor...

The half-time whistle goes, and Liverpool are unfortunate to be behind at the interval.

There's been nothing to choose between the teams, but a 60-second spell that saw Woodburn denied a penalty at one end before Walters nodded in at the other means the hosts go in ahead at the break.

Woodburn appears to be brought down in the area by Pieters at one end, but no penalty is given.

Stoke then go up the other end and open the scoring through Jon Walters.

Liverpool force a corner after a good move down the right, but Origi can only head Milner's delivery over the bar.

It looks like Gini Wijnaldum is in down the right, but the Liverpool midfielder is flagged offside.

The Reds seeing much more of the ball in the last five minutes or so, but they're yet to test Stoke 'keeper Lee Grant.

Arnautovic volleys into the side-netting from an acute angle after Lovren had miscued a clearance.

An even opening half an hour here.

Ben Woodburn does well to nick the ball from Joe Allen just inside the Stoke half, but the teenager is unable to race clear with four home defenders nearby.

Liverpool have a stronger foothold in the game now.

Liverpool's first real foray forward ends with Alexander-Arnold whipping in a superb cross to the back post. Better from the visitors.

Liverpool having to soak up some early pressure from the hosts, here.

An early scare for Liverpool, as Xherdan Shaqiri sees a goal disallowed for offside.

Ben Woodburn gets us under way...

The teams are out in the Staffordshire sunshine, with kick-of fast approaching here at the bet365 Stadium.

Can Liverpool return to winning ways after Wednesday's draw?

Here's a reminder of today's teams...

The Reds arrive at the bet365 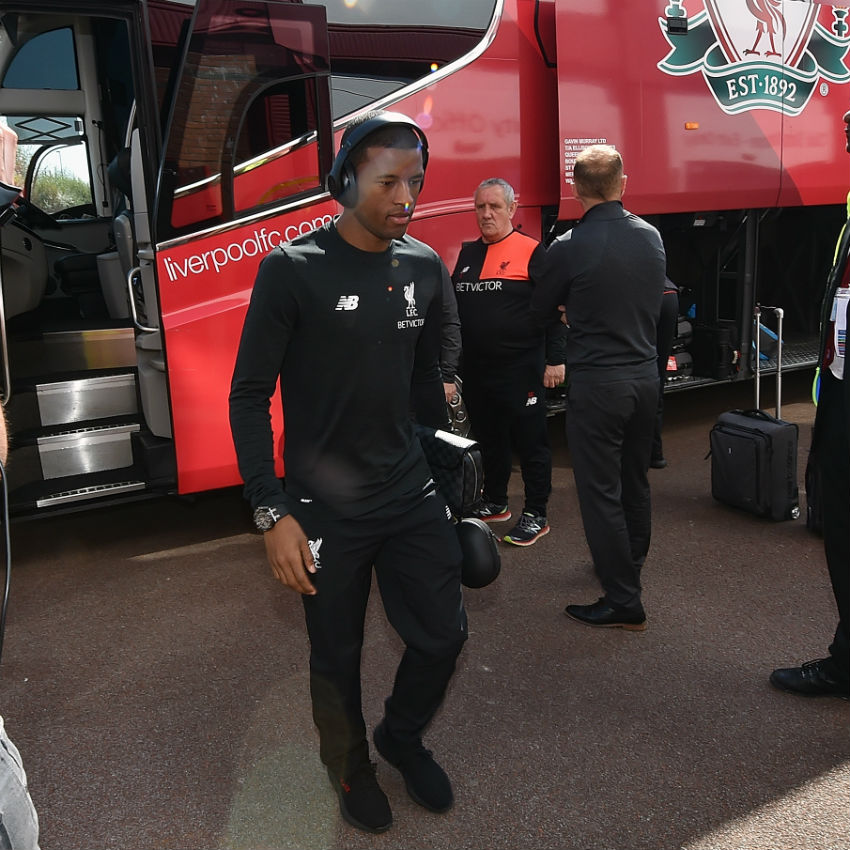 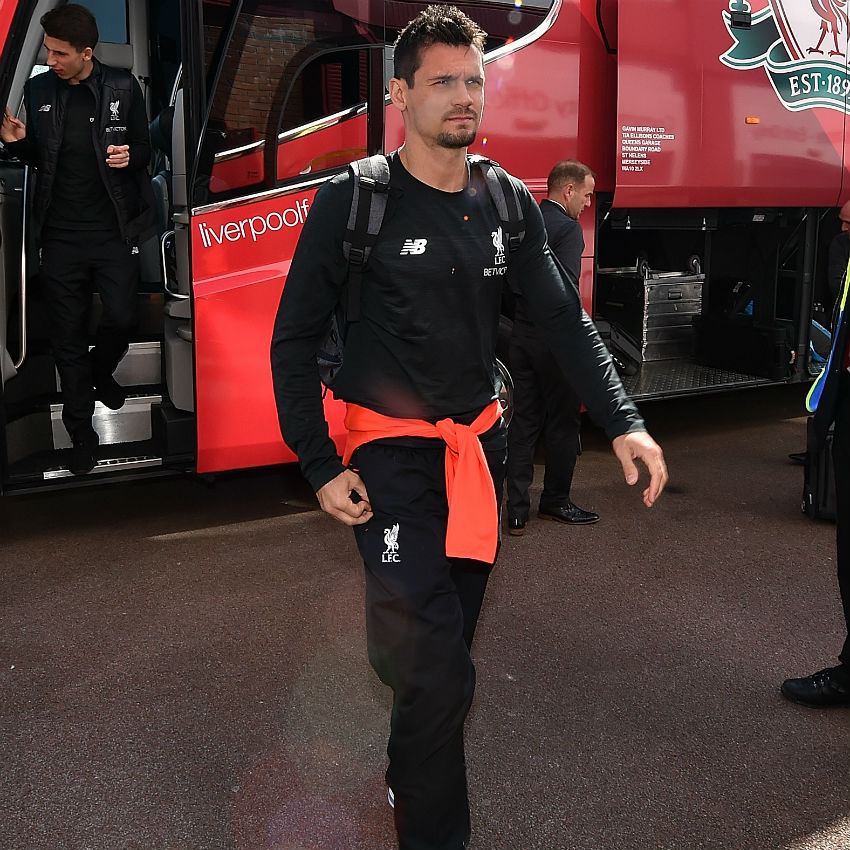 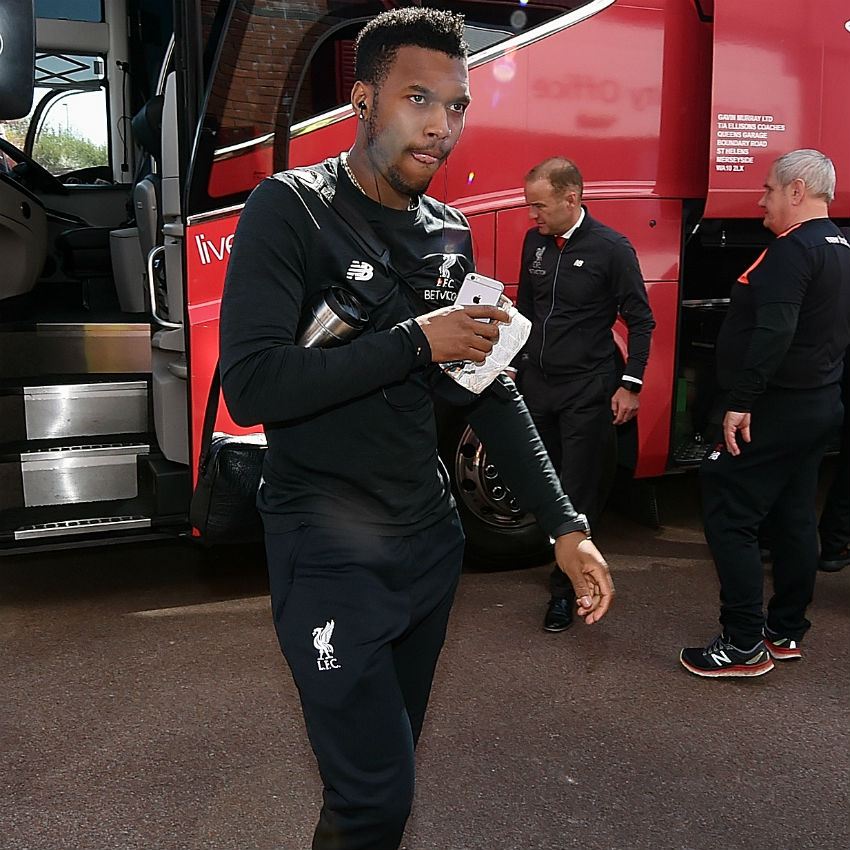 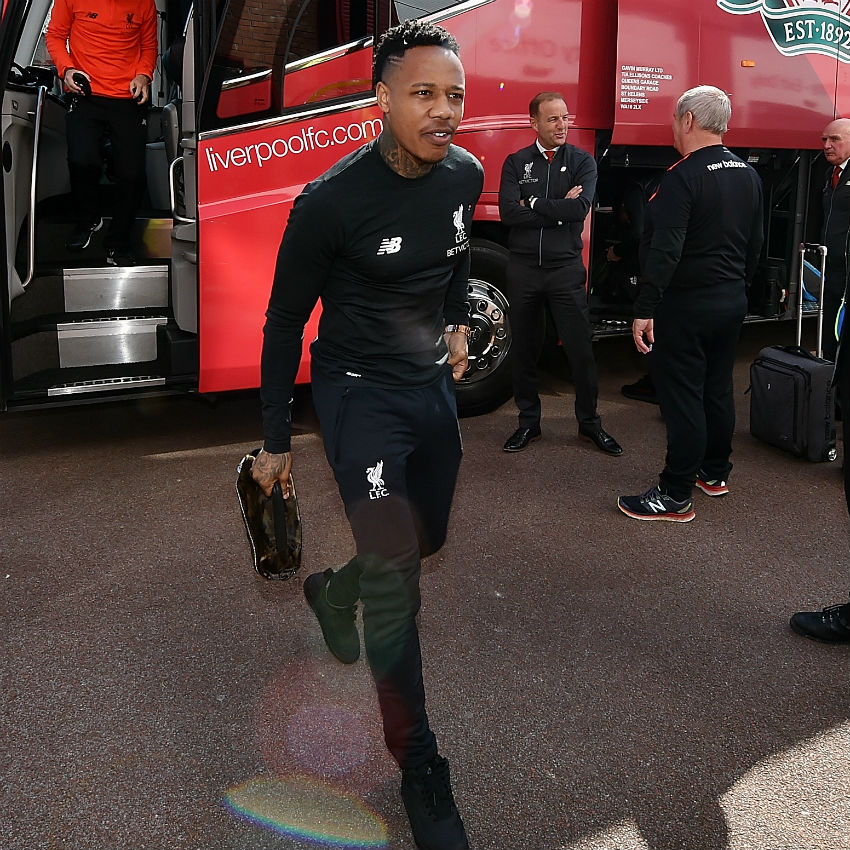 Inside the Reds' dressing room... 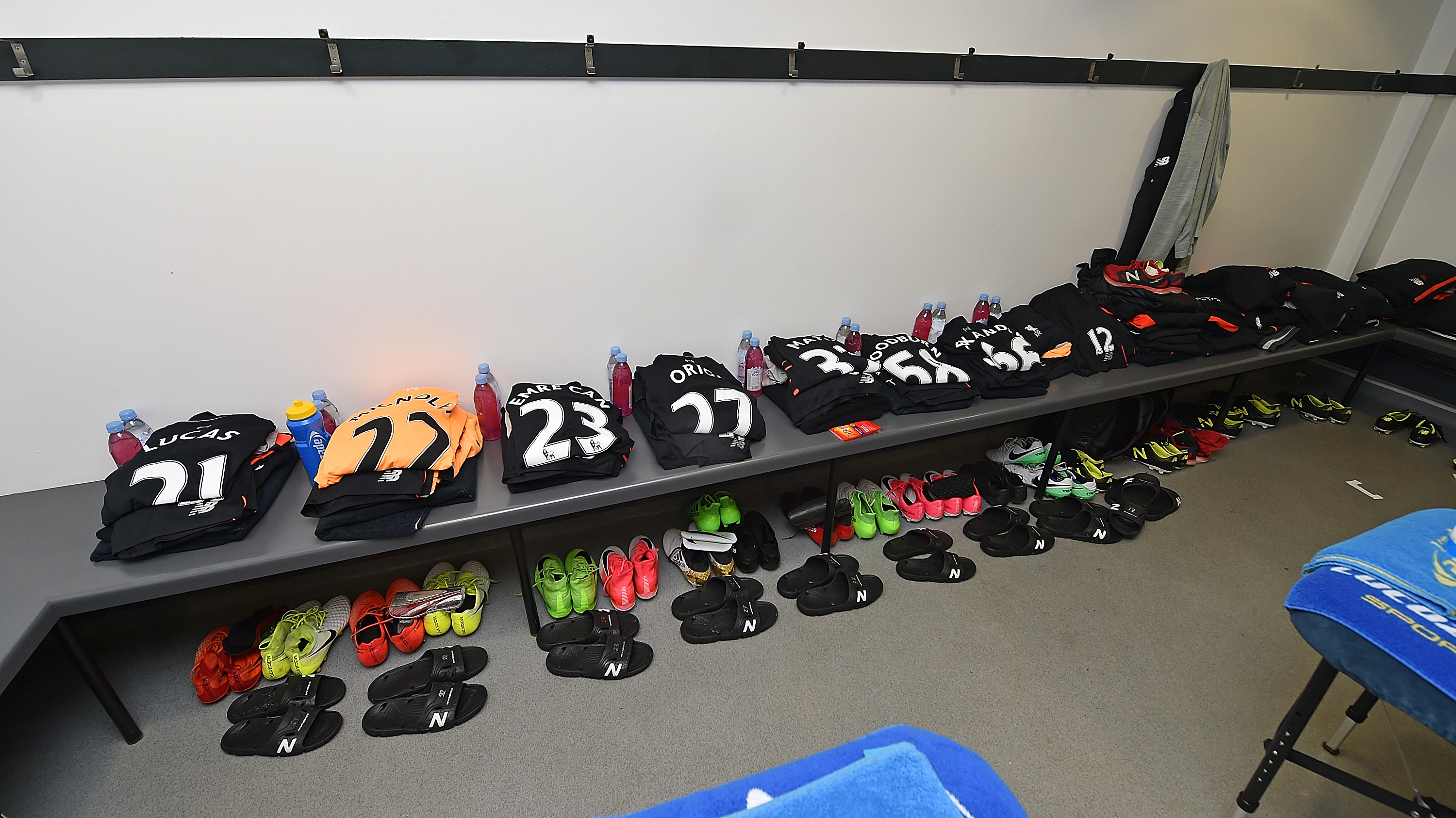 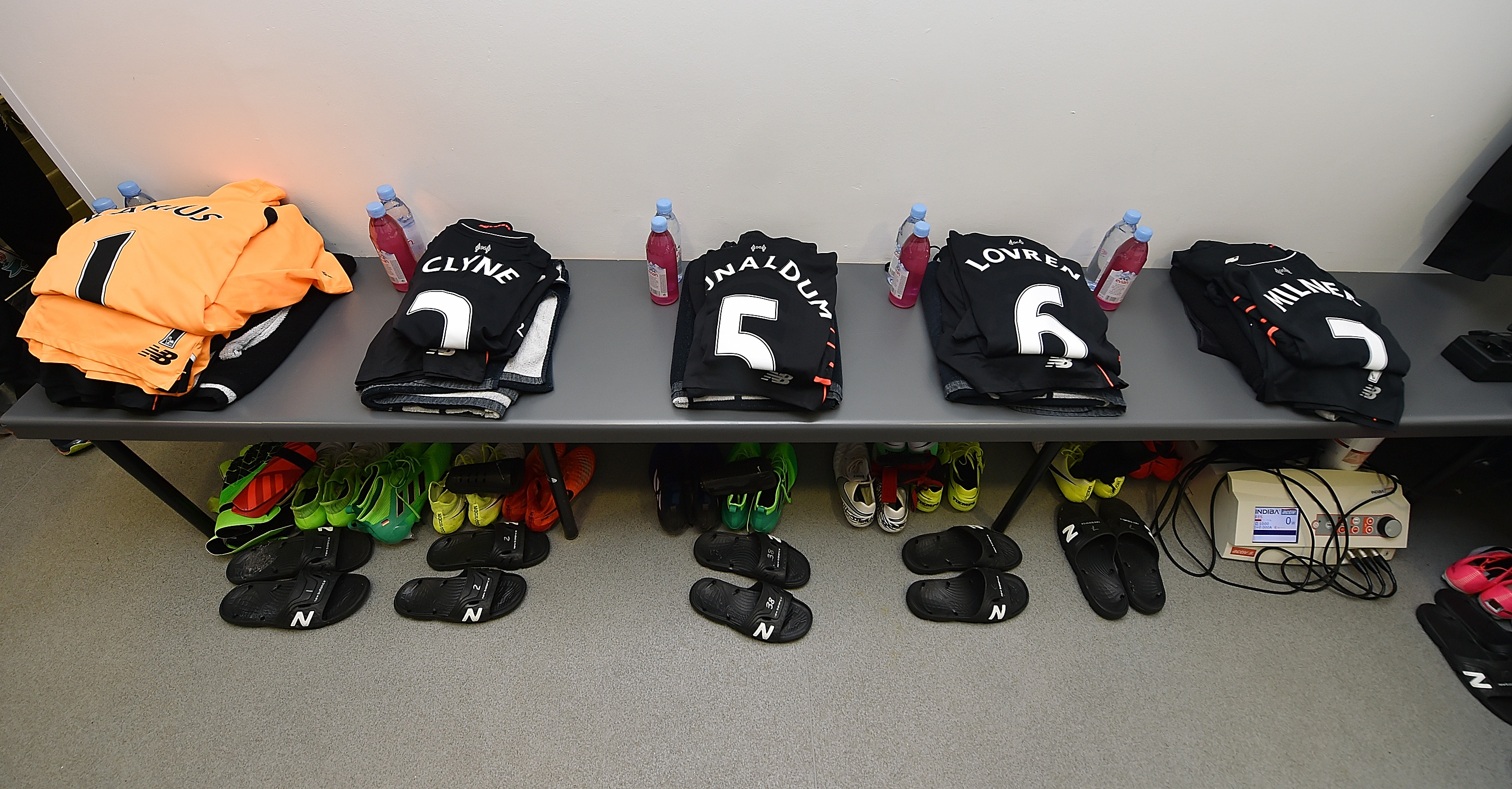 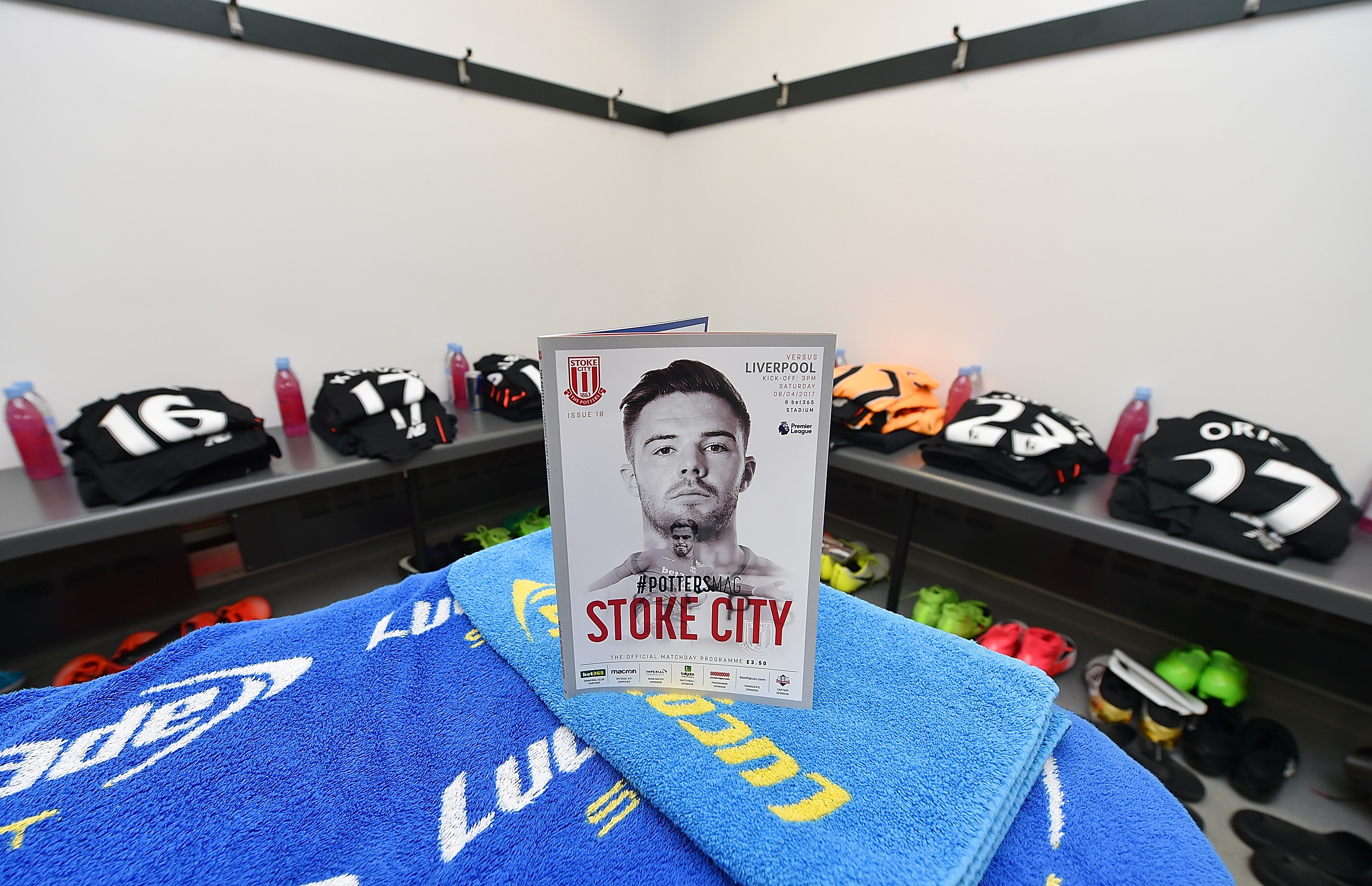 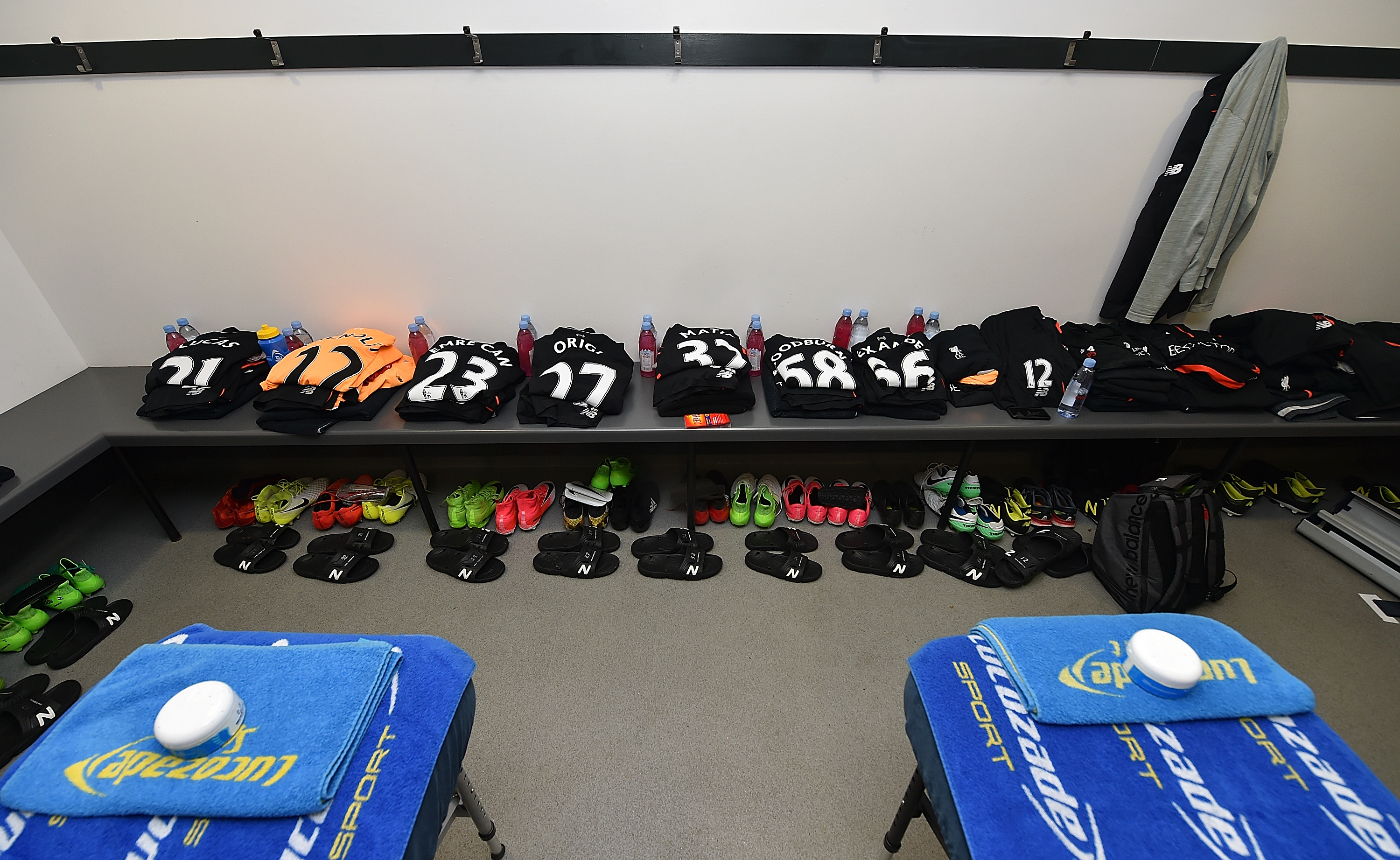 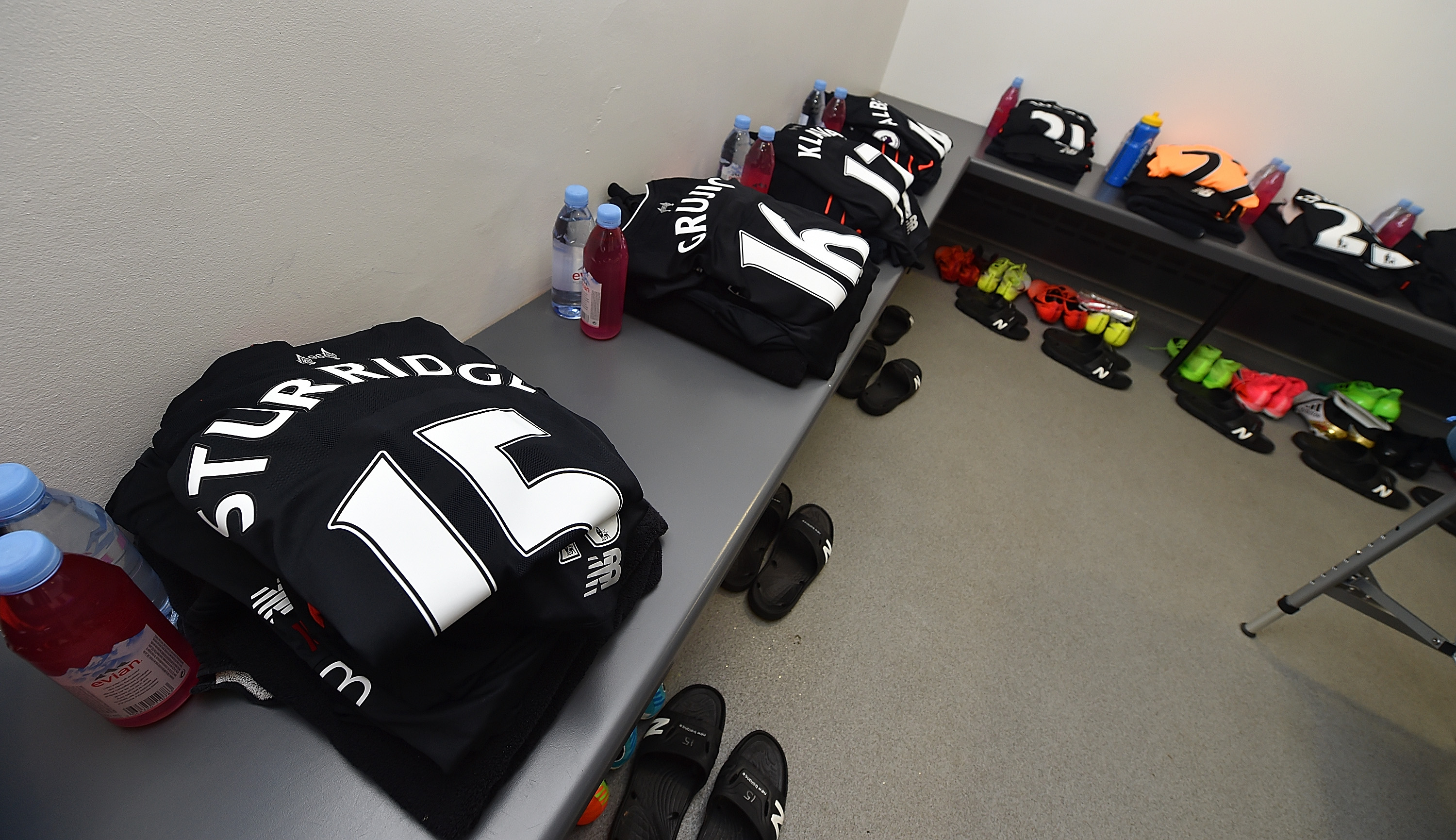 The teamsheets are in at the bet365 Stadium, and Jürgen Klopp has made three changes to his starting line-up from Wednesday’s game against Bournemouth.

Coutinho and Firmino are named on the bench, along with Daniel Sturridge.

Well, it's a warm, sunny and generally all-round glorious day at the bet365 Stadium, so much so some of the assembled press pack have donned their summer wardrobe, with short sleeve shirts a plenty.

So, if you're on your way up here, you can confidently leave your jacket in your car or on the coach.

Stoke in the sunshine #LFC https://t.co/xuh6I74BrA

Our partner BetVictor is offering the following prices on today's game...

Divock Origi has scored in his last two appearances for the Reds - which has come as no surprise to his fellow Belgian Simon Mignolet. 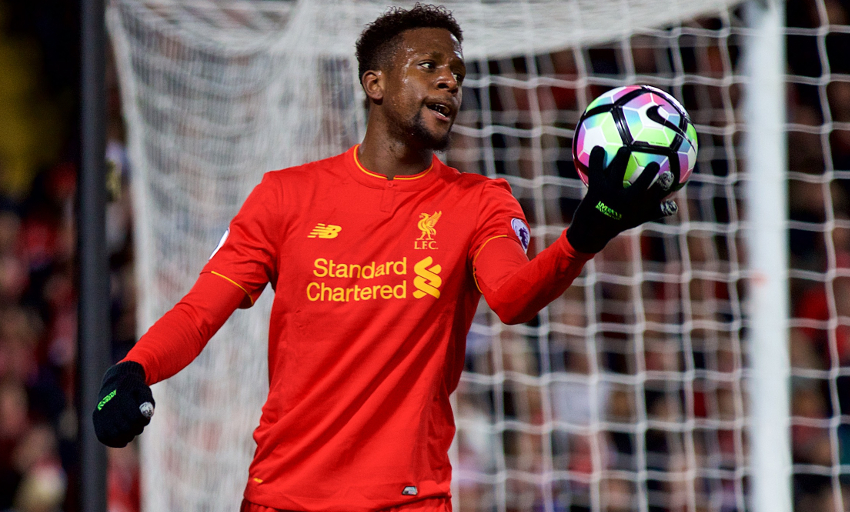 Click here to read our exclusive interview with the Liverpool goalkeeper...

More from the boss

Klopp also discussed the race for the top four, Liverpool's progress this season and the challenge Stoke will pose at Melwood yesterday.

Click on the image of the manager to find out more... 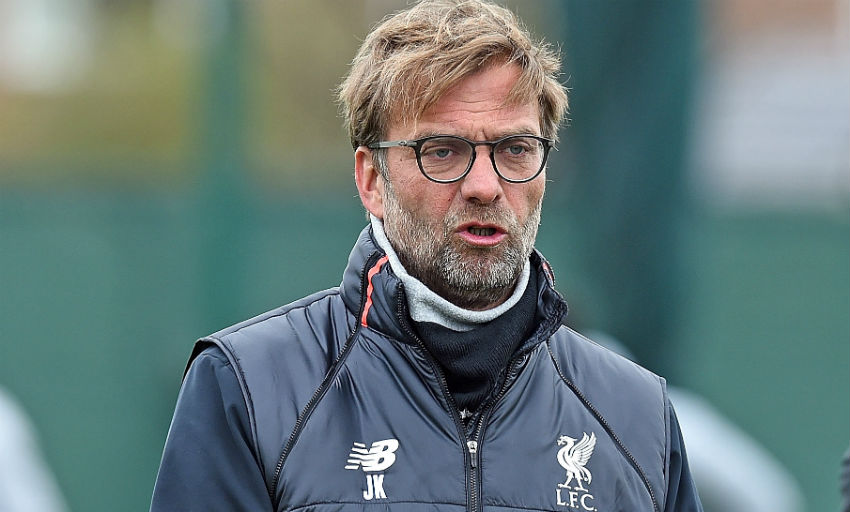 Liverpool have lost just five of their last 33 meetings with Stoke?

Klavan ready for a 'big fight'

Ragnar Klavan is prepared for a real battle in the Potteries this afternoon.

Click on the image of the Reds' No.17 below to read his thoughts on the game... 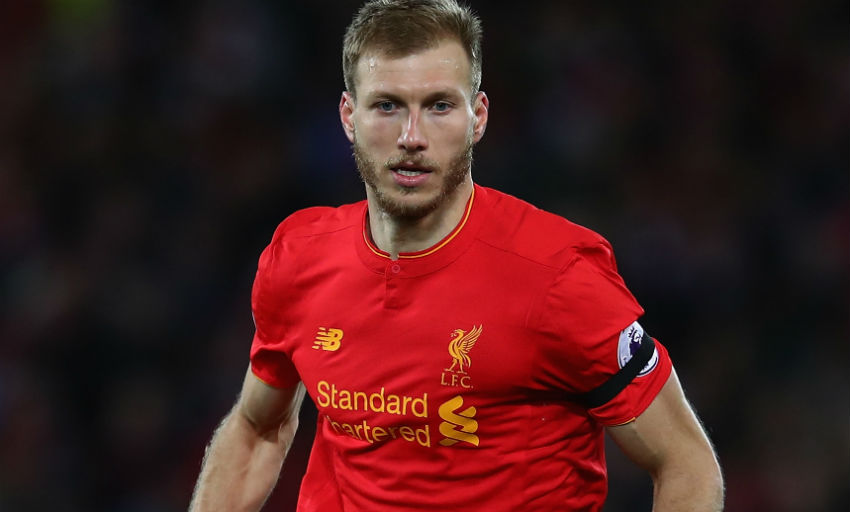 LFCTV GO subscribers can watch exclusive behind-the-scenes footage from Melwood as the Reds geared up for today's match earlier this week, simply by clicking play on the video below.

Jürgen Klopp gave a comprehensive overview of the fitness of his squad during his pre-match press conference at Melwood yesterday.

Click play on the free video below to watch the boss discuss the availability of Sadio Mane, Philippe Coutinho, Adam Lallana, Jordan Henderson and Daniel Sturridge.

Or, click on the links below to read what Klopp had to say... 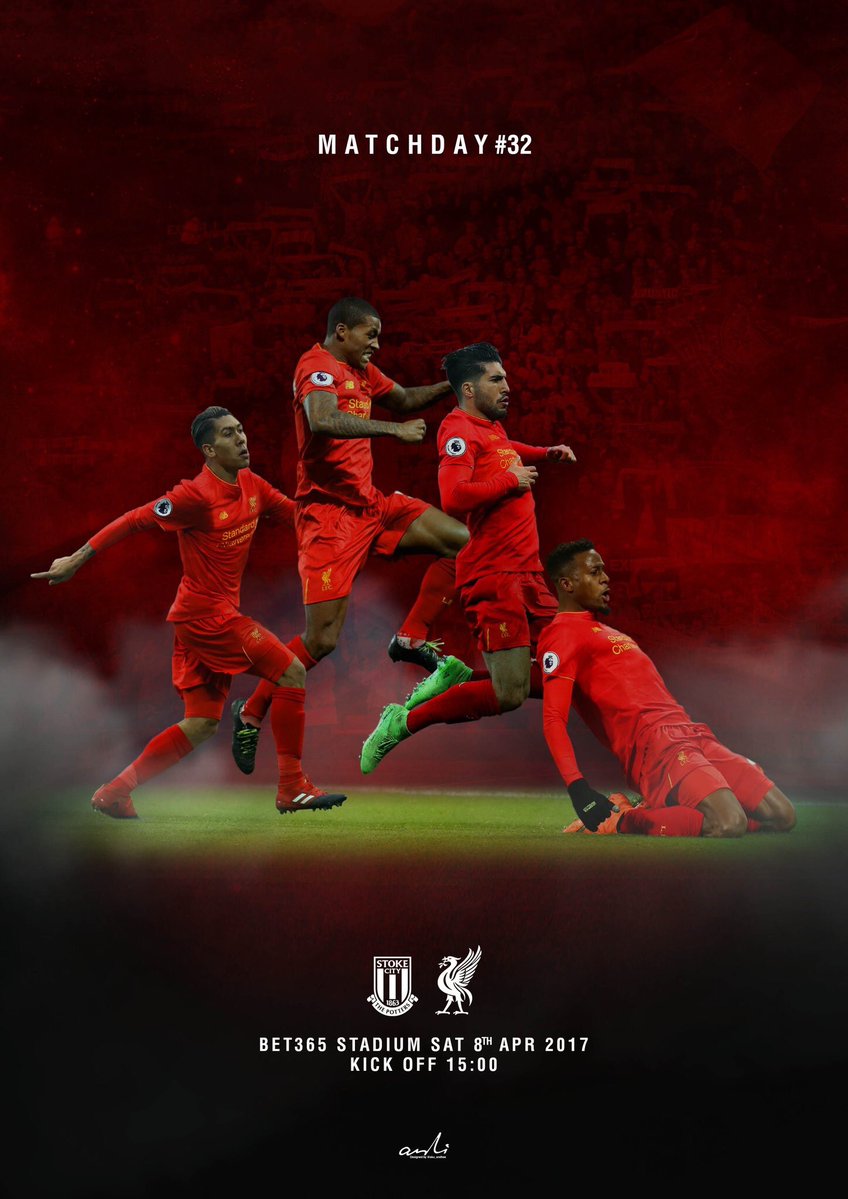 As the snapshot of the top of the Premier League table below shows, this weekend could be crucial in determining which teams finish the season in the top four.

Here are the games of other members of the division's top six during this round of fixtures...

The Premier League fixture is scheduled to kick-off at 3pm BST. Stay with us for the best coverage of the build-up, action and reaction from the bet365 Stadium.

Use the interactive Opta widgets below to compare and contrast the Reds and the Potters...