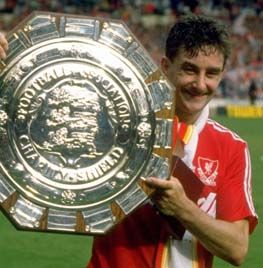 John Aldridge may have been at Anfield for only a short time, but it is a testament to his ability that he is considered one of the best goalscorers to wear a red jersey.

Aldridge, or 'Aldo' as he is affectionately known, was signed by Liverpool in January 1987 for £750 000 in order to fill the boots of the soon to be departed Ian Rush.

He grew up supporting the Reds and certainly became a crowd favourite during the two and a half years he spent at the club.

The born and bred Scouser began his career at amateur side South Liverpool before signing for Newport County, where his impressive goalscoring record attracted the attention of Oxford United, for whom he signed in March 1984.

The arrival of Aldridge coincided with a period of success for United as they enjoyed promotion from the Third Division to the First in the space of three years - and their top scorer certainly caught the eye of Kenny Dalglish.

The new boy got his Liverpool career off to a dream start by scoring the only goal of the game on his full debut against Southampton in February 1987.

It was the following season that the Republic of Ireland international truly left his mark as he scored nine goals in the first nine games of the season.

He was an integral part of Liverpool's 1987-88 Championship winning side - scoring 26 league goals as the team went 29 games without defeat.

The season ended on a sour note for the striker, though, as Liverpool lost out on claiming a league and Cup double. Aldo became the first player to miss a penalty in a FA Cup final at Wembley as the Reds were beaten by giant-killing Wimbledon.

Thankfully, Aldridge returned to Wembley for the Merseyside FA Cup final the following season and extinguished any bad memories by opening the scoring in a 3-2 win.

At the beginning of the 1989-90 season Real Sociedad made a £1.1 million offer for Liverpool's No.8 and he departed for Spain in September 1989 - but not before scoring a penalty against Crystal Palace in his last game for the club.

His goalscoring exploits continued in Spain and he became a fans' favourite at the Basque side.

After two years Aldridge returned to Merseyside when he signed for Tranmere Rovers and equalled the club's goalscoring record in his first season - netting 40 goals in total.

He became player-manager at Prenton Park and hung up his boots in 1998 with 474 goals in 882 games, overtaking Jimmy Greaves as British football's record goalscorer. He was honoured with a benefit match against the Liverpool side of 1987-88.

His Tranmere side got to the Worthington Cup final in 2000 but lost out narrowly to Leicester City.

The following season, with Tranmere struggling in the bottom half of Division One, Aldridge resigned as manager.

He now works in the media and is a regular pundit on LFC TV.