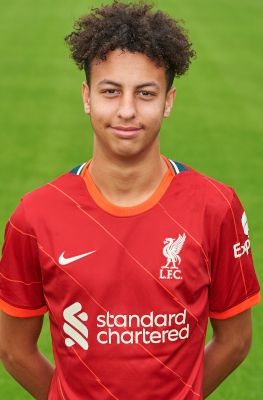 Kaide Gordon is an exciting winger who joined Liverpool from Derby County in February 2021.

He started Academy life with the U18s before making his U23s debut and scoring on his Premier League 2 debut away at Leicester City.

Kaide normally plays on the right side of the attack and loves to take on defenders and provide assists.

He made a senior debut in the Carabao Cup away at Norwich City in September 2021 and then signed his first professional contract with the club.

Kaide became Liverpool's youngest ever scorer in the FA Cup when he netted on his Anfield debut in the third-round win over Shrewsbury Town in January 2022, and then started in the Carabao Cup semi-final win over Arsenal at the Emirates.