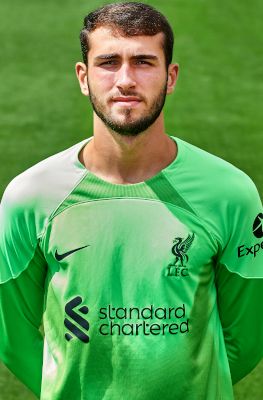 Harvey Davies is a highly-rated stopper who signed his first professional contract with the club in July 2021.

The Scouser has been at Liverpool since U9 level and made his U18s debut as an U16 player in 2019-20 when he featured in the FA Youth Cup against Tottenham Hotspur.

He was an integral part of the U18 squad that made it all the way to the final of the FA Youth Cup in 2021, making some vital stops in away ties against Manchester United and Leicester City in particular.

Davies has enjoyed time training with the first team at the AXA Training Centre and in March 2021 was rewarded for his performances with a place on the bench in the Champions League away fixture against RB Leipzig. He was also named as a substitute for both legs of the subsequent quarter-final versus Real Madrid.

The goalkeeper then got on the pitch for Jürgen Klopp's side in the 2022 pre-season, during which he penned a new, extended deal with the club.

Harvey won his first medal with Liverpool when he was named as substitute goalkeeper as the Reds won the FA Community Shield in July 2022, with a 3-1 win over Manchester City at King Power Stadium.