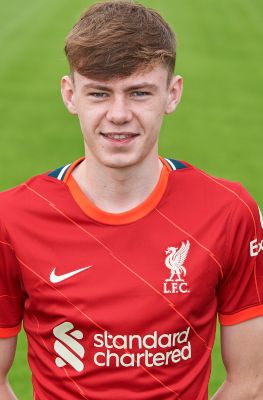 A talented and versatile player who has featured mainly at right-back for Liverpool’s U23s and U18s, Conor Bradley signed his first professional contract with the club in July 2020, and signed a new long-term deal a year later.

Bradley, who officially joined the Reds from Dungannon United in September 2019, made his senior international debut for Northern Ireland at the age of 17 in May 2021.

Conor spent most of the 2020-21 campaign with Barry Lewtas’ U23s squad, scoring his first goal at Premier League 2 level against West Ham United in March, and also played in Marc Bridge-Wilkinson’s U18s team which made it all the way to the FA Youth Cup final.

He travelled with the first-team squad to Austria in July 2021 and played in the friendly game against VfB Stuttgart.

Conor made his first-team breakthrough in 2021-22 when he made his debut in the Carabao Cup tie at Norwich City.

He went on to make five first-team appearances and was also nominated for the Premier League 2 Player of the Season, having registered three goals and eight assists from his 21 appearances in the league.

Bradley then joined League One side Bolton Wanderers on loan for the 2022-23 season.