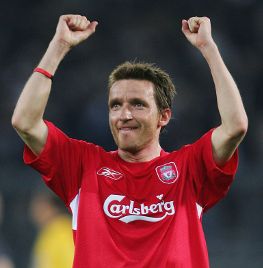 Vladimir Smicer left Liverpool for Bordeaux in the summer of 2005 just weeks after signing off in style by playing a crucial role in the Champions League win over AC Milan.

Coming on as a substitute for Harry Kewell, Smicer scored the Reds' second goal in the memorable comeback and also scored the deciding penalty in the vital shootout before Jerzy Dudek's save from Andriy Shevchenko. It was a sweet reward for Smicer, who returned to action in February 2005 after missing most of the 2004-05 season due to a knee operation.

The Czech international first arrived at Anfield in 1999 and joined his close friend Patrik Berger at Liverpool.

An attacking midfielder, Smicer had shot to prominence in 1996, helping Slavia Prague reach the semi-finals of the UEFA Cup and then starring for the Czech Republic during their run to the final of Euro 96.

He then moved on to French club RC Lens, where he enjoyed more success - inspiring the club to a first-ever French title in 1997-98.

In June 1999 he was recruited by Liverpool to fill the void left by the departure of Steve McManaman to Real Madrid. His first campaign in the Premiership was a difficult one as he struggled to come to terms with the pace of the English game, and his cause was not helped by a succession of injuries.

The 2000-01 season saw Vladimir fare much better, whether it be on the flanks or behind the front two. Having got to grips with life in the Premiership and regained full fitness, he showed in glimpses just what he was really capable of and played an important role in the Reds' treble cup triumph.

Unfortunately, he was plagued with injury problems and a lack of consistency, but he did have some good moments, including the last-minute winner against Chelsea in 2002 and the performance in the 2-0 win over Roma in the Champions League at Anfield.

And then there was the perfect ending, with his Champions League final heroics of 2005 ensuring that he'll forever be remembered as a legend on the Kop.