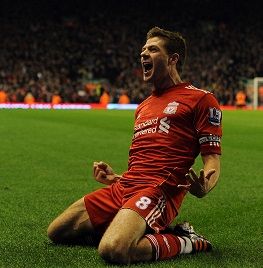 Few men will ever match the legacy forged by Steven Gerrard at Liverpool FC.

The only player in Reds history to feature in the club's all-time top five for both appearances and goals, the talismanic midfielder clocked up an astonishing 710 games and found the target 186 times.

A complete footballer of undoubted world-class ability, revered by teammates and opponents alike, respected by rivals and adored by supporters, nothing seemed impossible to Gerrard - he could do everything and he gave everything.

Superstars like Stevie come along once in a generation. Fortunately for Kopites, he was their hero and inspiration for 17 remarkable years at Anfield.

Raw power, speed, a grace of touch, clinical finishing, shuddering tackles and a refusal to give up carried Gerrard to seven major trophies, an FA Cup final named after him, an MBE and a lifetime of appreciation.

His path to Liverpool greatness began when he was spotted playing for Whiston Juniors, aged nine. After impressing as a trainee, he signed his first professional contract eight years later.

Those in the know at the Academy and around the club suspected someone special was emerging, with whispers growing louder of the potential Steven possessed.

Within 12 months, a first-team debut arrived. The Scouser was introduced as a second-half substitute against Blackburn Rovers on November 29, 1998 - a landmark day for player and club.

Persistent back and groin problems punctuated his blossoming career, but by 2000 he was established as a Reds regular and had already forced his way into the England set-up.

Now regarded as the archetypal box-to-box midfielder, Stevie was instrumental in the unique cup treble of 2001. Following success in the League Cup and FA Cup, he scored in the unforgettable 5-4 UEFA Cup final triumph over Alaves.

His knack of producing in big games was crucial in the League Cup final of 2003, with a stunning long-ranger at the Millennium Stadium setting Liverpool on the way to a 2-0 victory against Manchester United.

Later that year, the No.8's growing position as the side's on-field leader was acknowledged by Gerard Houllier in the form of the captain's armband - which he would wear for more than a decade, longer than any other Red.

As Houllier made way for Rafael Benitez in the dugout, Gerrard matured, matching his awesome natural attributes with refined technical quality and tactical understanding.

The greatest night of his sporting life soon ensued. On May 25, 2005, he lifted the club's fifth European Cup after perhaps the greatest final in the competition's history.

Stevie had previously hauled his team back from the brink earlier in the campaign with a piercing strike into the Kop end which saw off Olympiacos and booked a berth in the knockout stages.

But in Istanbul he helped to inspire a comeback that remains unbelievable. Trailing 3-0 to AC Milan at half-time, it was Gerrard's sublime header on 54 minutes that kickstarted a turnaround which ended with a sensational win on penalties.

In the aftermath of Champions League glory, 'Captain Fantastic' put an end to speculation about a move away from Anfield by committing to a fresh contract.

With his future sorted, the skipper went on to plunder 23 goals in 53 games the following season. He was crowned PFA Player of the Year, the first Liverpool man to be so since John Barnes in 1988.

That campaign culminated in another FA Cup success, Benitez's charges defying the odds to recover from the shock of an early deficit to West Ham United in Cardiff.

Having set up the Reds' first goal, Gerrard equalised at 2-2 and later shook off cramp to wallop a last-minute volley from 35 yards into the bottom corner to keep his side in the contest. Shortly afterwards, he hoisted aloft the trophy.

Milan took European Cup revenge in the 2007 showpiece, but the subsequent signing of Fernando Torres and the tandem he and Gerrard formed led to the latter's most irrepressible period.

He reached a century of Liverpool goals in October 2008, racking up 24 throughout the season to scoop the Football Writers' Player of the Year accolade.

Sadly, his tremendous haul was not enough to secure the Premier League title that would always elude him, with the Reds narrowly pipped to the post by rivals United.

A tumultuous time followed, on the pitch and off, with Benitez replaced by Roy Hodgson as manager and the ownership of the club changing hands too.

Kenny Dalglish was tasked by Fenway Sports Group with steering the team back on course at the outset of 2011 and though Gerrard had to battle injury setbacks, he experienced some memorable moments under 'The King'.

In February 2012, he led Liverpool out at Wembley for the first time and despite missing a penalty in the League Cup final shootout with Cardiff City, he climbed the steps to claim the silverware.

Then, just a few weeks later, he scored a mesmerising hat-trick in a 3-0 win over Everton at Anfield, a feat that hadn't been achieved since 1935.

A 2013 Liverpoolfc.com poll of supporters saw the Englishman take the No.1 spot in the '100 Players Who Shook the Kop' countdown.

By finding the net with a penalty against Newcastle United at St James' Park in October 2013, Gerrard reached the landmark of 100 goals in the Premier League.

Steven was the heartbeat of an unexpected title challenge under Brendan Rodgers in 2013-14, having dropped into a new deeper role as the Reds ultimately took second place on the final day.

That summer saw the midfielder participate in a third World Cup, in Brazil, and continue in the role of England captain that he had assumed permanently in 2012.

The campaign went badly wrong for Roy Hodgson's side, though, and their final game of the tournament - against Costa Rica - was his 114th and last for the Three Lions before his international football retirement.

Back to club duty, Gerrard still breached double figures in striking 13 goals during 2014-15 as Liverpool collectively struggled to recreate the blistering football of the previous season.

In January 2015, the captain made the poignant announcement of his intention to leave the club at the end of the campaign after 17 years as a Red.

Elimination in the semi-finals denied him the chance of winning another FA Cup on his 35th birthday, but the Anfield crowd paid a special tribute to their No.8 in his final appearance at the place he calls home.

With the well wishes of everybody connected with the club, he departed for a new challenge in America with LA Galaxy, safe in the knowledge of an eternal place in the history books.