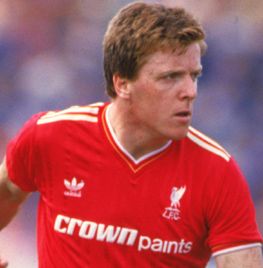 Steve Nicol is one of the best defenders to have ever played for the club and his versatility made him invaluable. Indeed the the £300,000 Bob Paisley paid Ayr United to bring him to Anfield in October 1981 proved one of the bargain deals of all time.

He was signed to challenge Phil Neal for the right-back position. Neal was not to be moved and Nicol slotted in at right midfield. In his first full season he came second in PFA's vote for the most promising player of the year in 1983-84 behind Luton's Paul Walsh, soon to become a Red. The season almost ended in disaster after he missed Liverpool's first penalty in the shoot-out against AS Roma in the European Cup final, but Liverpool still won.

Nicol is one of the most versatile players that football has ever seen. He was a great defender as well as superb in attack. He scored some brilliant goals, showing off masterful finishes that would put most strikers to shame. He even lead the goalscoring charts at the beginning of the 1987-88 season, after scoring seven goals in his first seven games, including a superb hat-trick against Newcastle.

Nicol's importance was officially recognised with a FWA player of the year award in 1988-89, after filling six different positions that season, including deputising for the injured Alan Hansen alongside Gary Ablett at centre half.

A great character off the field, Nicol was the subject of many humorous stories from the changing room.

At size 11, Nicol's feet were among the biggest in football and his boots were a full size bigger than any other in the Liverpool squad of that era.

He later played for Sheffield Wednesday and Doncaster before emigrating to America to become manager of the New England Revolution.