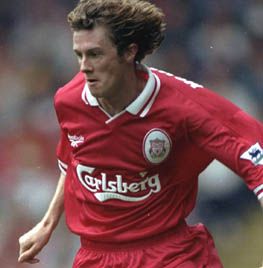 an Rush was once asked to name the most promising player in Liverpool's ranks and he replied Steve McManaman.

Macca, who was an Everton supporter, arrived at Liverpool at 14 years of age. Ten days after his first England Under-21 international, Steve got his first taste of first team action when he came on as a substitute against Sheffield United at Anfield. He next appeared in the starting line-up in the opening game of the 1991-92 season. Macca had a sensational season, playing 51 games and scoring 10 goals and crowned it with a man of the match performance in the FA Cup final at Wembley against Sunderland. He kept on going the following season by playing 41 and scoring seven goals.

When Roy Evans took over in 1994, Macca was given a free role and no longer being tied to the wings, inspired him to new heights. Liverpool beat Crystal Palace 6-1 in the first game of the season, and he netted twice.

His best performance was the 1995 Coca Cola Cup final at Wembley when he scored two fantastic goals in a 2-1 win over Bolton. So good was his performance Kopites called it 'The McManaman final.'

He then enjoyed a fantastic 1995-96 season and his link-up play with great friend Robbie Fowler was just sensational.  Liverpool showed championship form at times but the season ended in disappointment. The summer went well though for him when he starred for England in Euro 96, reaching the semi-finals.

That autumn speculation was rife that Juventus and Barcelona were going to offer £12 million pounds for him.

In 1997-98 captain John Barnes left Liverpool and Macca, now the most experienced player in the side, became vice-captain to Paul Ince. He scored 12 goals that season, including sensational goals against Celtic and Arsenal.

Macca's ninth and last season was not a pleasant one. Tiredness had set in from playing constantly for years and niggling injuries prevented him from impressing new boss Gerard Houllier. In the beginning of November, Macca was ordered to take a complete rest until Christmas.

At the end of January, he announced he would be leaving for European champions Real Madrid on a Bosman deal. Real discovered the lad could also play and he starred in the Champions league final in his first season, scoring a superb goal.

He later came back to England to play for Manchester City alongside good mate Robbie Fowler, and is now a respected football TV pundit.