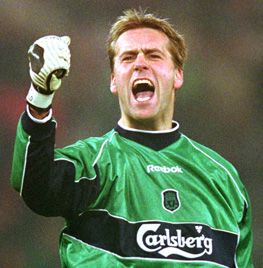 Sander Westerveld was signed by Gerard Houllier as a replacement for David James and Brad Friedel.

His best moment was undoubtedly saving a penalty against Birmingham City in Cardiff to hand Liverpool the Worthington Cup and Houllier's first trophy as Reds boss.

Westerveld is a great shot stopper, but one could question his lack of dominance in the penalty area. He had an excellent first season, the cups rolled in the second.

Only three games into the season he made an unfortunate error against Bolton in the last minute of the game and his career was over at Anfield, after Houllier signed not one, but two keepers the same day with the arrival of Jerzy Dudek and Chris Kirkland. Sander revived his career with a successful spell in Spain with Real Sociedad; and he helped the Basque club to the runners-up place in La Liga and Champions League qualification.

In July, 2005 Westerveld returned to English football with Portsmouth but within a few months had made a loan move to Everton, who had suffered a mid-season injury crisis with their goalkeepers. But he played just twice for Everton's first team during his spell at Goodison Park before returning to Portsmouth, who released him in May, 2006. He then moved back to Spain, signing a one-year contract with Almeria and helping them into the Spanish First Division at the end of the 2006-07 season. In September, 2007 he returned to his homeland to join Sparta Rotterdam on a short-term contract but announced at the end of the 2007-08 season that he would not be staying on with the club.