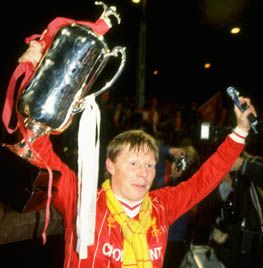 An energetic little midfielder that gained England recognition, Sammy Lee was a great servant to the club.

The Scouser scored on his league debut on April 8, 1978, but his appearances over the next two seasons were limited and he only began to establish himself as a first-team regular at the beginning of the 1980-81 season, relegating Jimmy Case to the bench. Case was eventually allowed to leave the club the following summer.

Liverpool lost the League Championship to Aston Villa in 1981, but received ample compensation in the knock-out competitions, winning the League Cup for the first time, although it took a replay to beat Second Division West Ham, and then defeating Real Madrid at the Parc dec Princes in Paris to take the European Cup for the third time.

Sammy played in both finals and would also win other cup winners' medals - as well as three successive championships - during the next three years. His consistent club form brought him to the attention of the national manager and he was capped 14 times for his country.

After the heady achievements of 1984, Sammy agreed to join Queens Park Rangers in the summer of 1986. He only had a year in London before seeking a change of fortune in the Spanish First Division with Osasuna, where he stayed two years before heading back to England.

Sammy returned to Liverpool as Phil Thompson's replacement as reserve team coach in 1993 and Gerard Houllier's arrival as manager saw him move up to the first-team.

He left Liverpool in the summer of 2004 to join England's coaching staff full-time. In June 2005 he joined Bolton as assistant manager to Sam Allardyce and continued coaching the England team on part time basis.

He turned down the full-time England Under-21 job in 2006 to concentrate on Bolton and took over as their manager when Sam Allardyce resigned in April 2007.

Lee returned to Liverpool once more in May 2008 as Rafa Benitez's Assistant Manager.