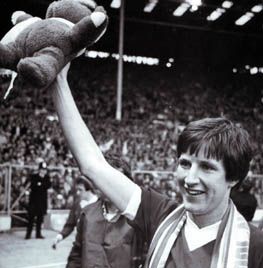 Ronnie Whelan is a Liverpool legend who scored some vital goals in a red shirt and captained the team.

When Whelan started his career, he was set to become one of the game's greats. The promising Irishman was voted the best young player of the year in his first full season (1981-82) and scored two goals in the League cup final against Tottenham. He may have developed into a less spectacular player than expected but he was still a damn good one. He became a firm fixture on the left, taking over the role vacated by Ray Kennedy. His intelligent play profited those around him and he was capable of the extraordinary when the team needed it the most, for example two truly spectacular goals against Manchester United in the Wembley League cup final of 1983 and the FA Cup semi-final at Goodison Park in 1985.

He lifted the FA Cup in 1989 after the 3-2 victory over Everton at Wembley.

Whelan moved into a central midfield role when John Barnes arrived and prospered alongside him with greater responsibility, increased when he was made captain. Injuries restricted him in the 90's and shortly into the 1994-95 season he moved to Southend United to become their player-manager. Following his retirement as a player in 1996, Ronnie worked for Panionios in Greece and Apollon Limassol & Olympiakos Nicosia in Cyprus. His finest achievement in management was taking the Greeks of Panionios to the quarter-finals of the European Cup Winners' Cup, at which stage they were soundly beaten by Lazio 7-0 on aggregate.

Ronnie was voted into 30th position in the worldwide poll "100 Players Who Shook The Kop", a position that ensures his legendary status as a man who appeared in nearly 500 competitive matches for Liverpool, in which he scored 73 goals, an admirable total for a midfield player.