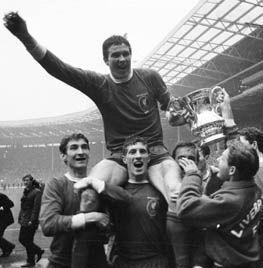 Ron Yeats was the first Liverpool captain to lift the FA Cup – but his place in Anfield history goes way beyond that.

The Scot was the rock around which the legendary Bill Shankly built his first great side.

A colossus – that's how Shanks described his latest signing in the summer of 1961 before inviting journalists to take a walk around him.

Yeats was installed as captain within six months of his arrival from Dundee United, and it proved to be an inspired choice.

His debut season saw Liverpool win the Second Division Championship after eight years in the wilderness and, over the next decade, Yeats would help turn the Reds into one of the most feared sides in Europe.

A rugged and commanding presence, the original Big Ron once prompted Shanks to remark: "With him in defence we could play Arthur Askey in goal!"

Rowdy, as he was known on the Kop, captained Liverpool to their first league title in 17 years in 1963-64 – but that was just a taste of things to come for Yeats and co.

The following season was to prove one of the most momentous in Anfield history, and not just because it brought a first FA Cup.

In August 1964, Yeats – who worked in a slaughter house before turning pro - led his teammates on a journey into the unknown as the club played its first ever European match in Reykjavik.

From there, it was the skipper who famously guessed right as Liverpool eliminated Cologne on the toss of a coin in a replayed quarter-final.

The 1964-65 campaign also saw the club ditch its white shorts, and it was Yeats who Shanks chose to model his new all red kit. It was a move the great man thought would intimidate opponents – and if the sight of his centre-half was anything to go by, he was right.

The season culminated in that never-to-be-forgotten afternoon on 1 May, 1965, when the 6ft 2in defender proudly led his Liverpool teammates up the 39 steps at Wembley to collect the FA Cup.

Another title triumph was celebrated in 1966 but, as the decade drew to a close, the ageing Yeats had to admit his best days were behind him.

He eventually lost his place to Larry Lloyd, though continued to be a positive influence at the club. After a spell as an emergency left-back which took him up to 454 appearances, the now legendary Scotsman accepted an offer to become player/manager of Tranmere Rovers.

It seemed only natural that a living legend like Yeats would one day return to Anfield in some capacity, and he did just that in 1986 when appointed chief scout, a role he fulfilled with great success until well into the new millennium.

A footballing giant in size and stature, Ron Yeats can now enjoy his well deserved retirement and bask in the knowledge that, without him, Liverpool Football Club would not be the club we know today.