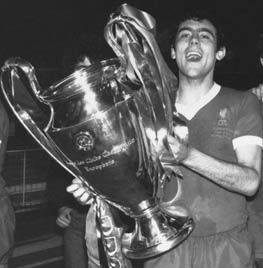 Ray Kennedy was converted by Bob Paisley from a striker to a left sided midfielder and is a Liverpool legend.

Ray started out as a striker at Arsenal, scoring 71 goals in 212 games in five years, and was a vital part of the triumphant side which won the League and FA Cup double in the 1970-71 season.

Ray's arrival at Anfield on July 12, 1974, was completely overshadowed by the shock news on the same day that Bill Shankly, the man who had signed him from Arsenal, had decided to step down from the manager's chair with immediate effect.

He started the 1974-75 season in attack, but he never made the immediate impact at Liverpool that had been hoped and expected.

This was possibly due to the fact that John Toshack missed most of the first half of the season because of injury, that Phil Boersma was not the kind of 'Radford' partner he had been used to at Arsenal or perhaps because questions were being asked about his weight, although nobody of course knew at that time, not even Ray himself, how the early stages of Parkinson's Disease were already affecting his physical condition.

Kennedy scored on his league debut at Chelsea and again a week later when Spurs were the visitors to Merseyside. In fact, he had a run of 16 League games before John Toshack returned to fitness and took his place. Ray only played in a further nine First Division fixtures in the second half of the season and a total of only five goals from 25 matches was a meagre return from a young striker who had enjoyed such a good reputation in London.

Maybe Ray's stay at Liverpool would have been only a brief one had it not been for a master-stroke by the astute Bob Paisley when, half-way through the 1975-76 season, he asked the forward to play on the left side of midfield instead.

Ray was a revelation on the left, winning England recognition at last. The move was so successful that it immediately saw off Peter Cormack, who had played in that position for the previous two seasons.

By the end of the year, Ray had made the No.5 shirt his own and added Championship and UEFA Cup winners' medals to the haul he already had from his Arsenal days.

For the next five seasons, he was a regular in the side and enjoyed unparalleled success as Liverpool dominated domestic and European football.

Over that period he only missed five First Division games and became one of very few players from any club to win three winners' medals in the European Cup.

His success with Liverpool brought him nearly 20 full England caps to add to the six he had gained at Under-23 level as a youngster in the Arsenal team. He also contributed a marvellous total of 49 goals for the Reds in all competitions during those amazing five years and his runs from midfield into scoring positions brought him almost as many goals as he created for others with his astute vision and distribution of the ball.

One of the most important goals he ever scored came in the semi-final of the European Cup in 1981 when the odds were stacked against Liverpool after Bayern Munich had ground out a 0-0 draw on Merseyside.

An already-depleted Liverpool team suffered a setback when Kenny Dalglish limped off injured early on, but Ray's experience and composure finally told when seven minutes from time he strode forward to collect David's Johnson's pass and stroked a firm right-foot shot away from the home keeper for the priceless away goal that would take the club through to their third European Cup final in five seasons.

Ray was 30 that summer and before the mid-way stage of the 1981-82 season his place in the side was first threatened and then taken by Ronnie Whelan.

Ray decided to move to Swansea to join his former teammate John Toshack but not before he had played enough games to qualify for his sixth League championship medal.

He later had spells back in his native North-East with Hartlepool and Sunderland, but by this time the onset of the terrible disease he had been suffering from became more acute and more public.

He coped bravely with increased lack of mobility and dependence on drugs to control his condition and became a public figure in the battle to make the Public more aware of it and provide funds for research.

In 1991 his loyalty to both Arsenal and Liverpool was rewarded with a well-attended testimonial match at Highbury, an emotional experience for him, his family and all the supporters who more than ever appreciated what he had done for the two clubs at which he had spent most of his playing career.