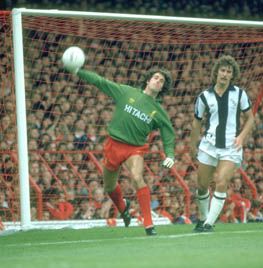 Ray Clemence is without doubt the greatest goalkeeper ever to play for Liverpool.

Not only that, he was arguably the finest stopper in Europe throughout the 1970s and early 1980s, a period in which Liverpool won five league titles and three European Cups.

In his vivid green goalkeeping top, Clemence became an Anfield institution and will go down as one of the shrewdest transfer bargains in football history.

Signed from Scunthorpe for £18,000 during the summer of 1967, he served his Kop apprenticeship in the Central League before replacing Tommy Lawrence on a permanent basis during the 1969-70 campaign.

An unflappable and reassuring presence between the sticks right from the off, Clem inspired confidence in those around him.

Within two years he was pulling on an England jersey, though his international career would be spent embroiled in a long-running battle with Peter Shilton.

Meanwhile, life as Liverpool's last line of defence became a lonely existence. While his teammates laid siege to the opposition goal, he was often required to make just one or two saves per game. Luckily, as well as lightning-quick reactions, one of the stopper's most valuable assets was his concentration.

The successful UEFA Cup campaigns of 1972-73 and 1975-76 provided two notable examples of Clemence at his best, as he denied both Borussia Moenchengladbach and Dynamo Dresden with exceptional penalty saves.

Many a First Division forward also saw their goalscoring hopes flounder in the face of Liverpool's ace custodian, while his crucial stop from Uli Stielike in Rome '77 proved to be the turning point of a momentous first European Cup final.

With Clem in goal, errors were rarer than a Reds defeat, clean sheets became a common occurrence and defensive records tumbled.

Having helped Paisley conquer Europe, he was in no small way responsible for taking the side's domestic domination to unprecedented heights in 1978-79, conceding a mere 16 goals during a 42-match league programme.

Little did the Kop know that Clemence's time on Merseyside was coming to an end. It was on the eve of the 1981-82 season that the Skegness-born shot-stopper announced he was leaving for Tottenham.

His last act in a Liverpool shirt was to shut-out the Real Madrid attack in Paris as a third European Cup triumph was secured – a fitting end to an Anfield career of such distinction.

During his 11 years in the first team he missed just six league matches, won every major honour in the game apart from the European Cup Winners' Cup and displayed a level of consistency that no Reds' keeper has since been able to match.