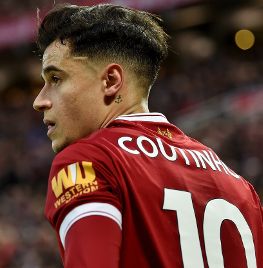 Philippe Coutinho evolved into one of the Premier League’s most clinical playmakers during his five-year spell with Liverpool, after joining in January 2013.

The Reds agreed a deal with Inter Milan for the services of the talented Brazilian, who had previously represented Vasco da Gama in his home country and, briefly, Espanyol on loan.

Given the No.10 shirt, he made his debut as a substitute against West Bromwich Albion at Anfield and marked his first start with a goal past Swansea City six days later.

It wasn’t long before Coutinho’s delightful use of the ball, and in particular his visionary passing, became a regular feature for Brendan Rodgers’ team.

With six months’ adaptation to the English game under his belt, the samba star added notable steel to his repertoire the following season as Liverpool launched an unexpected title challenge.

Used as a combative and creative figure behind a lethal attacking unit including the likes of Daniel Sturridge and Luis Suarez, he played 33 times as the Reds ultimately finished second behind Manchester City.

Coutinho’s influence grew in 2014-15 and his name was more consistently on the scoresheet as he exhibited panache for long-range strikes – such as sumptuous hits past Southampton and City.

A goal in the FA Cup semi-final with Aston Villa at Wembley was insufficient to send Rodgers’ side through to the showpiece, however, as they suffered a 2-1 defeat.

The Brazilian stepped up again following the appointment of Jürgen Klopp in October 2015 and was on target 12 times as an altered system including his compatriot Roberto Firmino was deployed by the new boss.

The quest for a trophy continued to bring frustration, though. Coutinho notched at Wembley once more, a vital equaliser in the League Cup final with City, but Klopp’s men were beaten in a penalty shootout.

Three months later, Sevilla quashed Liverpool’s hopes of Europa League glory in the decider in Basel, Philippe having scored against Manchester United and Borussia Dortmund along the way.

He enjoyed his most productive season for the club in 2016-17, despite an ankle injury robbing six weeks of the campaign between November and January. His 14 goals helped the Reds secure a top-four finish and a return to the Champions League.

By now a regular for the Brazil national team too, Coutinho’s reputation led to speculation regarding a transfer to FC Barcelona – but the club blocked attempts to make the deal happen that summer.

When the playmaker returned to duty in mid-September, he quickly re-established himself in the XI and amassed 12 goals in the first half of the season, including a Champions League hat-trick against Spartak Moscow at Anfield.

But come the January transfer window, an agreement with Barcelona was reached and Philippe completed the formalities of his switch to the La Liga side after 201 appearances and 54 goals for Liverpool.