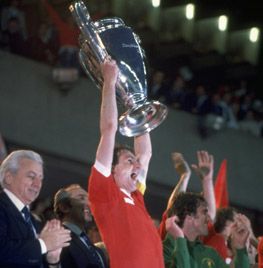 When Phil Thompson proudly held aloft the European Cup in Paris in May 1981, it was the realisation of every young Liverpudlian's dream.

For here was a lifelong Red, born into a working-class family in Kirkby, who completed a meteoric rise through the ranks to the summit of continental football.

No-one could begrudge this hard-working professional his moment of fame. He initially joined his idols as a spindly-legged apprentice and skippered the youth team as a midfielder before catching the eye of manager Bill Shankly.

Thommo was thrust into the first team without hesitation at Old Trafford in April 1972. Despite his tall and skinny appearance, he was made of stern stuff and rose admirably to the challenge.

Shanks put him on a diet of steak and chips. The result? An extra three stones and a regular place in the first-team.

The rookie defender played 14 times as the title came back to Anfield in 1972-73, but it was in 1974, when Liverpool reached the FA Cup final, that he really came of age.

Thommo played in every game en route to Wembley and then famously silenced the pre-match taunts of Malcolm 'SuperMac' Macdonald as the Reds romped to an impressive 3-0 success.

A footballing centre-half of style and grace, his defensive partnership with Emlyn Hughes even prompted Liverpool to change their style of play. Instead of launching long balls up field to the centre-forwards, it became commonplace to play from the back.

The Scouser's undiluted passion for the club meant he never gave less than 100 per cent and a plethora of accolades came his way. When Hughes left for Wolves, Thompson was the natural candidate to succeed him as captain and the trophies continued to come.

In 1979 he was part of a record-breaking back-line that conceded only 16 league goals.

Two years later, in April 1981, Thommo became the first Reds skipper to lift the League Cup, but the triumph was overshadowed within a month as his beaming smile lit up the night sky in Paris as European Cup number three was captured.

Despite this, the defender's tenure as captain was about to reach an abrupt end. A poor start to the 1981-82 campaign prompted Bob Paisley to hand the armband to Graeme Souness.

Although the season was to end on another Championship-winning high, the arrival of Mark Lawrenson meant Thommo's days as a first choice centre-back were numbered.

The curtain was eventually brought down on an illustrious Anfield career in 1985 but he left with every boyhood dream fulfilled.

He's since been back to the scene of these dreams on two separate occasions as reserves manager under Kenny Dalglish and assistant to Gerard Houllier.

Although no longer involved with the club on a day-to-day basis, it's plain to see from his work in the media that LFC remains close to his heart.