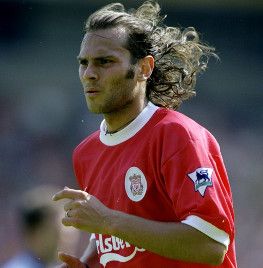 Patrik Berger will always be remembered for his explosive long range shooting and the man who provided the pass for Michael Owen's winner in the 2001 FA Cup final against Arsenal.

He tasted success at an early age. He was in the Czech Under-16 squad that became European champions in 1990. Berger started on the books of Sparta Prague but their rivals Slavia were quicker to react when Berger was eligible to sign a professional contract at 17. Berger spent four years with Slavia but Sparta dominated the league. He joined Dortmund in 1995 but although the club won the championship his only season he was mostly on the bench.

Berger impressed Roy Evans enough in the 1996 European Championships in England when the Czech Republic were runners-up to Germany.

At the beginning of September Berger had shaken off a calf problem and his LFC career got off to a glorious start. Two shots with his deadly left foot beat Leicester and his first game in the starting line-up versus Chelsea resulted in two more goals. Berger was selected player of the month after his very first month as a Liverpool player!

Berger was clearly seen as an out-and-out striker by Evans, threatening Collymore's place in the team. His scoring ability was evident and he finished with nine goals in his first season. The following campaign he had Kopites roaring their appreciation with a hat-trick against Chelsea.

He flourished under the management of Gerard Houllier and and fantastic goals against Wimbledon, Leeds United, Manchester United and Tottenham are forever kept in the minds of LFC suppporters.

He went on to play a key role in the 2000-2001 treble season but injuries sadly held back his progress in his last couple of years at Liverpool and at the start of season 2002-2003 it was clear that his future would lie elsewhere the following summer.

Patrik moved to Portsmouth in 2003, having scored 35 goals in 196 first-team matches for Liverpool. His impact on the south coast was immediate as he scored against Aston Villa on the opening day of the 2003-04 season. He then scored a winning goal against Liverpool a few weeks later. Early in the New Year (2004), he had to undergo knee surgery and his appearances for Portsmouth from then on were limited until it seemed that another change of club would be in the player's best interests. After being released by Portsmouth in June, 2005 Patrik joined Aston Villa on a two-year contract.

The player continued to suffer from injuries in the Midlands and didn't figure much for Villa, who eventually let him move on loan to Stoke City. Shortly after the end of the 2006-07 season, Berger signed a one-year extension to his contract but played little football in the enclosing 12 months.

A year and a day after signing that contract extension Patrik decided to return to his homeland and at the age of 34 signed a two-year contract with Sparta Prague.