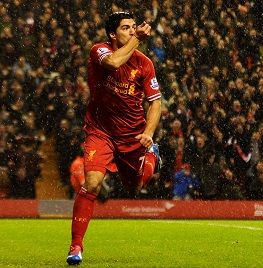 Luis Suarez developed into one of the greatest players in world football and thrilled Kopites on a weekly basis by wearing the famous No.7 shirt for Liverpool for three-and-a-half years.

Signed from Dutch outfit Ajax on deadline day in January 2011, the Uruguayan forward was the first major transfer overseen by Reds legend Kenny Dalglish upon his return to the dugout.

The prodigious goalscorer made his debut for the club on February 2 that year, entering the action as a substitute against Stoke City and requiring just 16 minutes to claim his first strike at the Kop end.

From there, fans were beguiled by Suarez's unique combination of innate creativity, will to win, work rate, sublime finishing and inventiveness, with his performances improving month after month and elevating him to the elite.

After an explosive start to life in English football, Suarez helped Uruguay win a record 15th Copa America title in July 2011, scoring the opener in the final against Paraguay to take his tally for the event to four. It surprised no-one when he was voted player of the tournament.

Suarez would score 17 goals in 39 appearances during his first full season in Merseyside, including the equaliser as Liverpool defeated neighbours Everton in the FA Cup semi-final. Another highlight was a superlative hat-trick at Carrow Road which included a 45-yard lob. He also ended the campaign with a League Cup medal.

Having captained Uruguay at the London 2012 Olympic Games, Suarez returned to Melwood ahead of the start of the new season and signed a new long-term deal to commit his future to Liverpool.

The Uruguayan found the target 30 times in all competitions during a remarkable 2012-13 season and received the Standard Chartered Player of the Season award by a landslide majority.

Having registered a ratio of more than a goal a game with a series of phenomenal displays in the first half of the next campaign, in December 2013, Suarez signed another new long-term contract with the club.

By the conclusion of 2013-14, the forward had found the back of the net a staggering 31 times in league football - thriving in partnership with Daniel Sturridge - to contribute to a second-place finish for the Reds, who pushed the title race to the final day.

Among that haul was a four-goal salvo against the unfortunate Norwich City, featuring two genuine Goal of the Season contenders, and efforts past the likes of Everton, Manchester United and Tottenham Hotspur.

Luis' unforgettable displays were rewarded with a host of honours, including the PFA Players' Player of the Year, the Football Writers' Association's accolade, three prizes at the club's inaugural Players' Awards Dinner and many more.

In July 2014, however, it was announced that an agreement had been reached with Barcelona for Suarez to join the Spanish side, and he thanked the club, staff and fans for the 'great moments and memories'.