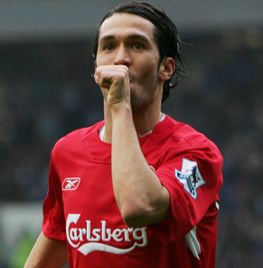 Luis Garcia arrived at Anfield from Spain and became the darling of the Kop.

A gifted player, the diminutive Spaniard scored some truly unforgettable goals in a red shirt and gave us some brilliant moments.

Benitez was in charge of Tenerife in 2000-2001 when Garcia starred to help promote Tenerife to La Liga. Garcia scored 16 goals in 40 games, but he was only on loan from Valladolid and returned there in 2001-02, playing 27 games, scoring eight goals. He moved to Atletico Madrid in 2002-03, making 25 appearances, scoring six goals and was considered by many as their best player that season. Barcelona snapped him up before the 2003-04 season.

He was no stranger to Barcelona as he had been raised in their B-side from the age of 19 until he was 21. He played 25 games and scoring four goals last season for Barca, coming into his own in the second half of the season. He can play on both flanks and in central midfield.

Garcia became quite a hit in his first year in English football and he netted five goals in the run-up to the Champions League final in Istanbul. Two of them will be forever etched in Anfield memory banks. A sensational strike against Juventus at Anfield had everyone believing this could be our year and the one against Chelsea in the semi-final was priceless. Luis Garcia's role during the passage to the Istanbul ensured he will always be remembered with affection in the history of the club.

The following season he was inflicting pain on Chelsea again when he scored a belter in the FA Cup semi-final at Old Trafford, but unfortunately he missed the final through suspension when he was sent-off in a Barclays Premier League encounter ironically against final opponents West Ham United.

Garcia missed half of his third and last season at Liverpool after getting injured in 6-3 defeat to Arsenal in the fifth round round of the Carling Cup.

In July, 2007 it was announced that Luis would be returning to play in the country of his birth with Atletico Madrid. He failed to hold down a regular place in the Spanish capital but still made 28 appearances in his first season back in La Liga, scoring twice.

He will always be a big Kop favourite and the classic 'Sangria' song is still sung on the Kop to this day.