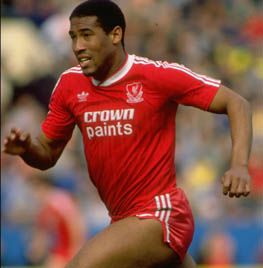 There has been no finer sight in football than John Barnes in his pomp gliding down the wing.

For talent and grace alone, he's an automatic choice in any hall of fame; but his impact on the game went far beyond goals and silver.

The Jamaican-born dribbler was the first high-profile black player to grace Anfield back in the 1980s, a time when racial abuse echoed around stadia across the land.

Barnes, alongside contemporaries such as Lawrie Cunningham, Cyril Regis and Viv Anderson, was a catalyst for change.

He didn't so much break down racial barriers as sweep around them at pace with the ball at his feet; always poised, always enthralling.

The intense scrutiny which followed his £900,000 move from Watford in June 1987 didn't put Barnes off his stride as he set about winning over the locals.

Arriving alongside fellow attackers John Aldridge and Peter Beardsley, the trio had Anfield purring from day one, and over the next few seasons 'full house' signs became a permanent fixture outside the Kop gates as the team endeavoured to play some of the most entertaining football English terraces have ever seen.

An awesome blend of strength and skill, Barnes ensured a front row seat in the Kemlyn Road or Paddock was one of the hottest tickets in town.

A stunning free-kick against Oxford on his home debut – an occasion delayed three weeks due to a collapsed sewer under the Kop – was followed by a superb solo strike against QPR.

Not even an infamous banana-throwing incident in the Merseyside derby at Goodison Park could knock him off key. In true Barnes style, he back-heeled the fruit off the pitch.

His sweet left foot was to prove the downfall of many a team as Liverpool took football in this country to new heights, completing a record-equalling 29-game unbeaten run and, ultimately, clinching a 17th league title.

Unsurprisingly, Digger walked away with both 1987-88 Player of the Year accolades but defeat to Wimbledon in the FA Cup final denied him and his teammates a dream double.

On reflection, his first season at the club was his finest but Barnes continued to perform at a consistently high level over the next nine years.

Success in the 1989 FA Cup final against Everton went some way to making up for the deep disappointment of losing at Wembley 12 months previous but victory on this occasion was tainted by the tragic events at Hillsborough in the semi-final.

A third successive campaign of breathtaking brilliance from Barnes in 1989-90 helped secure another Championship. He top-scored with 22 league goals and was again voted FWA Player of the Year.

Critics argued that he failed to replicate his outstanding club form for England but this was of little concern to Liverpudlians who continued to marvel at his magic.

Widely regarded at club level as one of the top players in the world, the ongoing European ban sadly denied Barnes the chance to test himself against the cream of the continent - and prevented him from emulating the medal haul of his illustrious Anfield predecessors.

As well as an excellent footballer, he was also an accomplished rapper, performing on both the 'Anfield Rap' and New Order's 'World in Motion'.

The positive influence he exerted on the club's up and coming youngsters meant Barnes was the ideal man to succeed Ian Rush as captain in the mid-1990s, with the likes of Robbie Fowler, Jamie Redknapp and Steve McManaman all benefiting from playing and training alongside a true great.

By this time, his role in the team had changed. A serious injury and ageing legs had reduced his effectiveness as a flying winger but, rather than bow out of the limelight, Barnes moved inside and started pulling the strings from a central midfield position.

His intelligent football brain allowed him to dictate play with the minimum of movement. Short, sharp and measured passes became the key components of his game and, with him orchestrating proceedings, possession was very rarely conceded.

Unfortunately, the glory days had passed. The team was going through a major transitional phase and no further honours were to come his way as skipper.

Barnes led the side out for the turgid 1996 FA Cup final defeat to Manchester United but it was to be his last high-profile game for the club.

A year later, the midfielder finally brought the curtain down on his illustrious Anfield career with a move to Newcastle.

The qualities he possessed would have seen him walk into any of the great Liverpool sides of the past – no lesser a figure than Bob Paisley once said as much.

Just as the No.7 shirt will always be associated with Kenny Dalglish, the No.10 will forever belong to Barnes.