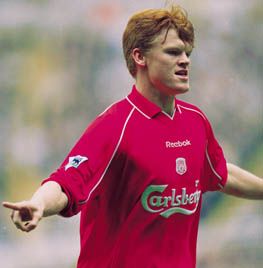 Left-back John Arne Riise notched up well over 300 appearances during a seven-year association with the club through the Houllier and Benitez eras.

The Norwegian, who was famed for a fierce shot, joined Liverpool for approximately £4million in June 2001 having previously played for Aalesunds FK and Monaco.

His debut came in the Charity Shield against Manchester United on August 12, and it was in a fixture against the same opponents three months later that the flame-haired defender won a place in the heart of every Liverpool fan. From then until the end of his Anfield career, the Kop sang: "John Arne Riise, ooh, ah, I want to know how you scored that goal."

The full-back, who could also play left-midfield, remained a first-team regular as the Rafalution began in 2004.

It was he who opened the scoring against Chelsea in the 2005 Carling Cup final with a volley on 45 seconds - the fastest goal in the fixture's history.

During the 2005 Champions League final against AC Milan, Riise provided the cross for Steven Gerrard to head home on 54 minutes - and in doing so helped trigger the greatest comeback European football has ever witnessed. The fact his penalty was saved by Dida in the shoot-out is now a historical insignificance.

The following season was again full of highlights, most notably another opening goal against Chelsea - this time in an FA Cup semi-final.

Three weeks later he erased memories of the Istanbul penalty miss by converting his spot kick to help the Reds clinch their seventh FA Cup.

Riise continued his knack of scoring against Jose Mourinho's men at the start of the 2006-07 campaign, this time in the Community Shield. The full-back ran from inside his own half before lashing the ball beyond Carlo Cudicini to open the scores. Liverpool went on to win the match 2-1.

Ironically, the Scandinavian's last notable act in a red shirt again saw him net against Chelsea -- though this time it was at the wrong end to give the Blues a priceless away goal in the first leg of the 2007-08 Champions League semi-finals.

Riise was sold to Italian side AS Roma in June 2008.