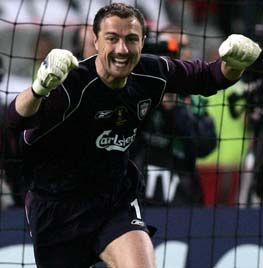 Whatever the future may hold for Jerzy Dudek it's doubtful his career will ever scale the heights of that glorious night in Istanbul on 25 May 2005.

It was Dudek's goalkeeping heroics that helped secure a never-to-be-forgotten fifth European Cup triumph at the Ataturk Stadium, ensuring that his name will forever be etched in Liverpudlian folklore.

The son of a Polish miner, Dudek was signed from Feyenoord by Gerard Houllier on a dramatic deadline day swoop in August 2001. Fellow keeper Chris Kirkland joined on the same day but it was the big Pole who was immediately handed the chance to stake his claim for the number one shirt.

Renowned for his bravery and strong reflexes, his early form was impressive but a high-profile howler that contributed to a home defeat against Manchester United blotted his copy-book.

He was eventually forgiven by the Liverpool fans for that misdemeanour against their bitter rivals but when he made a similar error in the same fixture three years later it seemed as though his reputation would be permanently stained.

It was going to take something special for Dudek to redeem himself in the eyes of the fans and a man-of-the-match performance in the Worthington Cup Final triumph over United later that season went some way towards that.

It was not until the 2004-05 season reached the most dramatic of climaxes, however, that his past sins were finally forgotten.

His stunning double reflex save from Andriy Shevchenko when the score was tied at 3-3 has deservedly gone down as one of the greatest saves ever, while his antics in the subsequent penalty shoot-out mean he'll now always be looked upon in the highest esteem by everyone connected to this club.

His penalty saves from Pirlo and Shevchenko inspired a pop song to be recorded in his honour but just weeks after his heroics in Istanbul a new goalkeeper was brought to the club and Dudek made just 12 more appearances in the first team.

If he was to play on until he's 100 it's unlikely he'll ever eclipse the high of Istanbul but the memories will never fade.