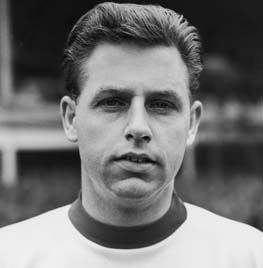 Gordon Milne's play was uncomplicated and others prospered around his unselfish play.

He made the transition from the Second Division to the First without any problems and he was a vital part on the right side of Shankly's midfield.

Milne played 14 internationals and had hoped to be one of LFC's four players with England in the 1966 World Cup, but he wasn't chosen for the final group. Milne only missed a handful of league fixtures in three seasons as Liverpool won the Second Division championship in 1962, established themselves in the First Division and then won the League championship itself in 1964. A further title followed in 1966.

In May 1967 Gordon signed for Blackpool and then took on the role of player-manager at Wigan Athletic. He was the England youth team manager for nearly a year before eight years as manager of Coventry City. After a four-year spell as manager of Leicester City, he moved abroad to coach Turkish club Besiktas and enjoyed great success with them, helping them a hat-trick of championship wins in 1990, 1991 and 1992.

In 1995 Milne became the chief executive of the League manager's association. But it is as a Liverpool player that Gordon will probably be most remembered. His part in the rise of the club in the 1960’s cannot be underestimated. He played in 282 league and cup matches for the Reds, scoring 18 times and despite the terrible disappointment of missing out on the 1965 FA Cup final to injury, two championship medals was ample compensation for this skillful and reliable half-back.