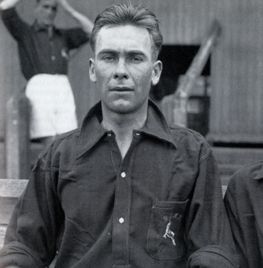 No list of great Liverpool goalscorers is complete without the name Gordon Hodgson.

The inside forward netted an incredible 240 times in 378 games during the 1920s and 30s, an era when the Red half of Merseyside often found itself in the shadow of the Blue.

Hodgson was a ray of hope, providing the Kop with a riposte whenever Evertonians bragged about the exploits of Dixie Dean.

Born in South Africa to English parents, Hodgson was spotted by Liverpool officials when visiting England with a touring side in the early 1920s.

He was signed up in December 1925 along with compatriots Arthur Riley and James Gray, and quickly set about re-writing the club's goalscoring records.

The forward served notice of his potential in his first full season with the club when he netted a 22-minute hat-trick against Derby County. It was the first of many.

In 1930-31, Hodgson set a new Reds record of 36 league goals in a season – a feat not surpassed until the emergence of Roger Hunt in the Sixties – while his tally of 17 Liverpool hat-tricks has yet to be beaten.

In 10 years at the club, the hitman averaged more than 20 goals a season and was worshipped by adoring fans on the Kop. International recognition also came his way in the form of three England caps, in which he scored one goal, and a single appearance for South Africa.

On completion of his decade of service, he was honoured by the club with a benefit sum of £650.

Hodgson pulled on the jersey 17 more times before Aston Villa bid £3,000 for the ageing striker in 1936.

He went on to finish his playing career with Leeds United and then became manager of Port Vale in the aftermath of the Second World War.

Despite leaving the Reds, he remained a highly popular figure among the Anfield faithful and it came as a great shock when Hodgson suddenly passed away on June 14, 1951.

His phenomenal goalscoring exploits deserved to reap greater reward in terms of silverware won but it's testimony to the loyalty Gordon Hodgson displayed towards Liverpool Football Club that he remained at Anfield for so long.

Without his goals, the barren years between the wars would have been unbearable and Liverpudlians of that generation were eternally grateful to him for that.