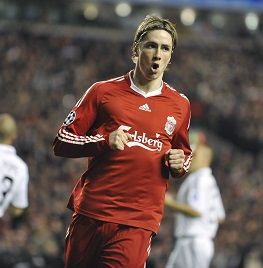 Few players have been adored by the patrons of Anfield as much as Fernando Torres - and even fewer have left the club in such unpalatable circumstances.

Signed for a club record fee of approximately £20 million in July 2007, Torres was handed the No.9 shirt vacated by Anfield legend Robbie Fowler.

Undaunted, he soon became the first Red since Fowler in 1996-97 to break the 30-goal barrier and quickly became the new idol of the Kop.

The goals continued to flow despite injury troubles - but in January 2011 he shocked Liverpool fans around the world by asking for a transfer to Premier League rivals Chelsea.

Such was his prodigious talent he was named the best U14 player in Europe following his performances in the 1998 Nike Cup.

Torres became the youngest player in Atletico history upon making his debut in May 2001. He went on to bag 21 goals in 2003-04 after being named Vicente Calderon's youngest ever skipper at the age of 19.

Having already top-scored in European U16 and U19 Championships, El Nino earned a first senior cap in September 2003 against Portugal. Seven months later he chalked up a first international goal against Italy. The forward would go on to net three times in the 2006 World Cup in Germany.

Clubs around Europe, including Manchester United and Arsenal, were understandably circling. However, in May 2007 it became clear Torres had his heart set on Merseyside when he revealed the phrase 'We'll Never Walk Alone' on the inside of his captain's armband during a match between Atletico and Real Sociedad.

Two months of speculation and paper talk ensued before the striker was finally unveiled at Melwood.

Torres made his competitive debut for Liverpool at Villa Park on August 11, 2007. A week later he smashed in his first official goal (he'd already scored in a pre-season friendly versus Shanghai Shenhua) when a trademark burst of pace against Chelsea sent Anfield wild.

Successive home hat-tricks to see off Middlesbrough and West Ham helped the hitman total 33 in 2007-08, including 24 in the league to overtake Ruud van Nistelrooy and become the most prolific foreigner ever in a debut season in England.

His crucial strike in the Stade Velodrome against Marseille won Goal of the Season on Liverpoolfc.tv, and it came as no surprise when fans also voted him their Player of the Year.

As if all this wasn't enough, Torres then topped off an incredible season by helping Spain to Euro 2008 glory in Austria and Switzerland. It was he who scored the winner in the final against Germany - one of two throughout the tournament. Remarkably, it was Spain's first major honour since 1964 - and our No.9 was the hero.

A series of hamstring injuries disrupted 2008-09, though a haul of 17 goals from 38 appearances aided Liverpool's best title charge since 1990.

Torres spent a large part of the summer that followed in South Africa, where an awesome 11-minute hat-trick against New Zealand saw Spain through to the Confederations Cup semi-finals.

He returned to England hoping to help the Reds finally collect the Premier League trophy - but it would prove a troublesome year for both player and club.

Injuries to our leading marksman undoubtedly contributed to a disappointing seventh-place finish in the league, though Torres still tallied 22 goals from 32 games in between two knee operations.

While Rafael Benitez was being replaced by Roy Hodgson back on Merseyside, our Spanish spearhead was again away with his country in South Africa - this time for the World Cup.

Torres struggled to find full fitness as Spain progressed through the tournament, and he lost his place to Barcelona's Pedro for the semi-final victory over Germany. Coach Vicente del Bosque stuck to his guns for the final, with the Liverpool man having to settle for an extra-time cameo in an historic 1-0 win against Dirk Kuyt's Holland. El Nino pulled up clutching his thigh during his short spell on the Soccer City pitch - but nothing was going to stop him taking part in the jubilant celebrations that followed.

A stop-start six months followed at Anfield and while Torres struggled to recapture the explosive form of his first season in England, many supporters believed that the arrival of Kenny Dalglish and his attacking brand of football would rejuvenate the Spaniard and bring about the best from our No.9.

However, on January 28, following a bid earlier in the day from Chelsea, Torres handed in a written transfer request and told the club he wanted to leave. Three days later he joined Chelsea for another club record fee.