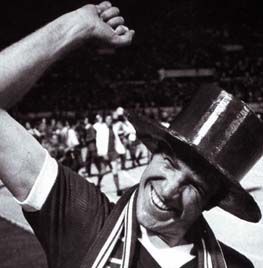 Emlyn Hughes was the first Liverpool captain to lift the European Cup, a fact which alone would earn him a place in any Anfield hall of fame.

His contribution to the club during the Shankly and Paisley eras went far beyond that unforgettable night in Rome, however.

With a beaming smile and boundless enthusiasm, Hughes is one of the most popular players ever to wear a Liver bird on his chest.

The mere mention of his name rekindles magical memories of Wembley '74, Molineux '76 and, yes, Rome '77.

Anyone lucky enough to see the late, great defender play will recall his never-say-die attitude, galloping forays into opposition territory and frantic goal celebrations. No wonder they called him 'Crazy Horse'.

Signed from Blackpool for £65,000 in February 1967, Hughes was destined for the top from day one. Legend has it that, on driving the 19-year-old down to Liverpool, Bill Shankly told a policeman: "Don't you know who is in this car? There sits the future captain of England."

Initially bought as a replacement for the ageing Willie Stevenson, the fresh-faced youngster was plunged immediately into the first team at left-back for a home game against Stoke. The Reds triumphed 2-1 and a glorious Anfield career was born.

Now operating in midfield, his dynamic performances brought international recognition. He'd go on to captain his country 23 times and was part of England's 1970 World Cup squad.

Back on the home front, Leeds tried their luck with a cheeky attempt to lure him away from Anfield by offering Peter Lorimer in a part-exchange deal.

There was no chance of Shanks agreeing. For whether it was at left-back, in midfield or at the heart of defence, where he eventually settled, Hughes could be relied upon to run through brick walls for the Liverpool cause.

The pain etched on his face as he sat in the dressing room after Arsenal pipped the Reds to 1972 league glory said it all: here was a man who took defeat personally.

Not that he tasted it too often. Crazy Horse played 65 games in the historic 1972-73 campaign when Liverpool clinched an unprecedented league and UEFA Cup double.

That summer saw Hughes handed the captain's armband at the expense of Tommy Smith, a move which prompted a long-running feud between the pair.

It was also at this time that he moved to the heart of Liverpool's back four as Shanks made an inspired tactical change. Gone were the days of the old defensive stopper: from now on the Reds would build from the back.

The switch was to reap rich dividends. The Barrow-born defender capped his first full season as skipper by proudly holding aloft the FA Cup at Wembley. It was the club's last trophy under Shanks.

Another league and UEFA Cup double arrived under new boss Bob Paisley in 1975-76, but all this was to be eclipsed the following year.

With Hughes now firmly established as on-the-field leader, the club not only retained the league title but also won its first European Cup in Rome.

As if the honour of being the first Liverpool captain to lift ol' big ears was not enough for one season, Hughes was also crowned Player of the Year by the football writers of England.

The Reds were riding on the crest of a wave which would see them become the first British club to retain European football's most coveted trophy in 1978 following a 1-0 victory over Bruges at Wembley.

The skipper's loyalty was rewarded with a testimonial in 1979 but a knee injury, coupled with the emergence of a young centre-back by the name of Alan Hansen, contrived to bring the curtain down on a wonderful career.

The Kop idol played the last of his 665 games in the forgettable FA Cup semi-final defeat to Manchester United at Goodison before a £90,000 transfer to Wolves.

At Molineux Hughes finally got his hands on the one trophy that eluded him on Merseyside: the League Cup.

After failing to set the world alight in the managerial hot-seats of Rotherham, Hull, Mansfield and Swansea, the Anfield legend took up a role as a team captain on the long-running BBC quiz show A Question of Sport. With his V-neck woolly jumpers and squeaky voice, he became a national institution – but it was as skipper of the Redmen for which he'll always be best remembered.

Crazy Horse passed away in November 2004.