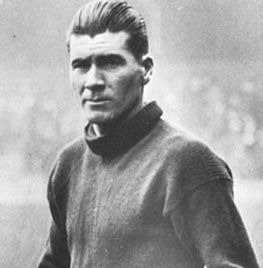 The legend of Elisha Scott will live forever in Liverpool folklore.

The Northern Ireland international is regarded by some as the greatest goalkeeper ever to guard the Anfield net after 21 years on Merseyside which saw him tot up nearly 500 appearances.

Born in Belfast, he followed in the footsteps of his older brother Billy, who was a stopper for Everton and Ireland.

Scott Jr signed for Linfield aged just 14 but was soon moved on to Broadway United where he learnt his trade until Billy recommended him to his peers at Goodison.

Fortunately for Liverpool, Everton deemed him too young, and when Billy then tipped off Anfield chairman John McKenna, the Reds did not hesitate in swooping for the 17-year old.

With the experienced Kenny Campbell still keeping goal, young Scott was considered one for the future. But it was not long before he made an impression.

The rookie got his debut against Newcastle United on the first day of 1913, keeping a clean sheet in the process.

In fact, so accomplished was his performance at St James' Park, it prompted the Magpies to offer £1,000 for the teenager there and then.

Scott was informed of the bid on the way back to Liverpool and, believing that Campbell would be difficult to dislodge, he thought it might be in his best interests to leave. Liverpool's secretary/manager Tom Watson, though, wisely refused and reassured the youngster that his future was at Anfield.

He was right. Towards the end of the 1914-15 season Scott enjoyed an extended run as Liverpool's first-choice keeper.

The advent of World War One interrupted his progress but as the 1920s dawned he quickly earned a reputation as one of the finest custodians around. One reporter wrote: "He has the eye of an eagle, the swift movement of a panther when flinging himself at a shot and the clutch of a vice when gripping the ball."

Scott won the first of his 27 international caps in 1920 and in 1921-22 missed just three games as the Reds won their first league title for 16 years. The following season he was an ever-present between the sticks as the Championship was retained.

The shot-stopper was by now a firm favourite of the Anfield crowd and the adulation he received was unprecedented. In 1924, after pulling off a stunning save at home to Blackburn Rovers, one fan even ran onto the pitch and kissed him.

Unfortunately, Liverpool failed to capitalise on their back-to-back title triumphs but Scott's popularity never once waned.

The unthinkable almost occurred in 1934 when Everton offered £250 for his services. He was coming to the end of his career and the Reds were ready to accept the offer until supporters flooded the local newspaper with letters of protest.

Despite the public outcry, it was clear Scott's Anfield career was reaching a conclusion.

On February 21, 1934, he played his 467th and final game for Liverpool after being offered a player/manager role at Belfast Celtic.

During the final home game of the season, Scott gave a speech in the directors' box which is said to have brought tears from even the most hardened of Kopites present.

He finally retired from the game at the age of 42 in 1936 and continued to manage the Belfast club until it folded in 1949.

Meanwhile, Scott's appearance record at Anfield stood until 1957 when it fell at the hands of Billy Liddell.