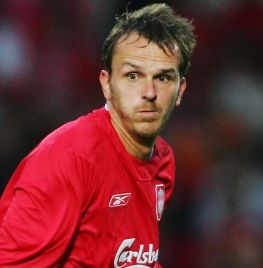 Defensive enforcer Dietmar Hamann arrived on Merseyside in the summer of 1999 and won practically every cup competition available during his seven-year stay at Anfield.

A highly athletic midfielder with tremendous composure, 'Didi' developed a strong emotional bond with the club's supporters after arriving at Anfield from Newcastle as part of Gerard Houllier's reshaping of the squad.

Sitting at the base of Liverpool's midfield, Hamann made an art out of breaking down opposition attacks with his intelligent reading of the game and tackling prowess; he would simply win possession and move his team forward.

After quickly settling in his first season with the Reds, Didi featured on 53 occasions during the treble campaign of 2000-01 and started all three finals - League Cup, FA Cup and UEFA Cup.

In addition to his experience and tactical maturity, Hamann would also occasionally unleash an outstanding long-distance strike. Stunning efforts against Fulham, Manchester City and Portsmouth, for example, remain lodged in fans' memories.

As the managerial reins were passed from Houllier to Rafael Benitez, the Germany international's importance never dimmed and he made a significant contribution to the Reds' success in 2004-05.

The introduction of the German midfielder at half-time in the 2005 Champions League final - with the Reds trailing 3-0 against AC Milan in Istanbul - altered the course of Liverpool history.

It was the calming influence of Hamann which shackled the previously rampant Kaka and allowed those spearheading the Liverpool attack more freedom, resulting in a famous fifth European Cup.

There was a carbon copy scenario 12 months later as Hamann entered the dramatic 2006 FA Cup final against West Ham after 70 minutes and opened the subsequent penalty kicks by converting from 12 yards.

That encounter in Cardiff was Didi's last appearance in Liverpool colours; with Benitez's team taking a new form for the seasons to come, Hamann moved on to Manchester City, via Bolton, with the well wishes of everyone at Anfield.