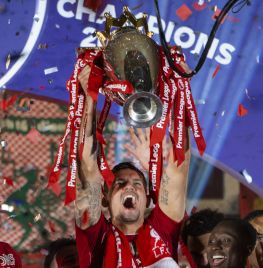 Dejan Lovren became a Champions League and Premier League winner during a spell with Liverpool that lasted precisely six years.

The Croatian centre-back made the move to Anfield in the summer of 2014 after a single season with Southampton, joining teammates Adam Lallana and Rickie Lambert in switching between the clubs that year.

He would go on to make 38 appearances in all competitions during his debut season as the Reds struggled to recreate the form that had earned a second-place finish in the Premier League in the previous campaign.

Lovren continued to feature regularly in the backline after Jürgen Klopp took the managerial reins in late 2015 and appeared in 10 Europa League matches – including the final – when Liverpool ended runners-up to Sevilla.

Indeed, it was his unforgettable last-minute goal in the 4-3 quarter-final win over Borussia Dortmund, one of the all-time great European occasions at Anfield, that kept his team on course for the showpiece.

The No.6 played his part the next season as Klopp successfully guided the Reds to Champions League qualification and was almost ever-present when Liverpool produced a thrilling surge to the tournament’s final in 2017-18.

In partnership with January arrival Virgil van Dijk in central defence, Lovren and his teammates eliminated FC Porto, Manchester City and AS Roma to reach Kiev, where they suffered a heartbreaking defeat against Real Madrid.

“Our journey as a team is only just starting,” he insisted in the aftermath – and he was right.

Though a combination of injury and competition for places limited Lovren to 33 games over the next two seasons – due to the form of Joel Matip and emergence of Joe Gomez – he was part of a squad that would achieve unprecedented success.

Liverpool gained redemption by winning the Champions League at the next opportunity; Lovren was on the bench as Tottenham Hotspur were beaten 2-0 in Madrid.

And the Reds followed up a 97-point Premier League season with 99 in 2019-20 to put an emphatic end to the club’s 30-year wait for a title, with the Croatian making 10 appearances along the way to secure a winner’s medal.

“It was emotional from the beginning until the end,” he said upon his subsequent departure. “I can say we made it together. That was a big journey for me that I will always carry forever in my heart.”