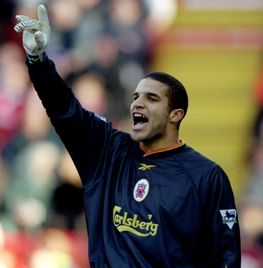 Although Liverpool perhaps did not get the best years out of David James, he made 277 appearances for the Reds and collected a League Cup, showing glimpses of becoming the top Premier League keeper he became.

Graeme Souness brought bright young talent James to Anfield from Watford for £1m in July 1992. David outlined his intent to claim both the Liverpool and the England No. 1 jersey within two years, but could not back up his ambitions on the pitch.

He made his Liverpool debut in August 1992 in a 1-0 defeat against Nottingham Forest. After conceeding 20 goals in 11 games at the start of the 1993-94 season, James lost his first-team place to veteran keeper Bruce Grobbelaar.

James started in Liverpool's victorious League Cup final against Bolton in 1995, but was on the losing side as the Reds were defeated by Man United in the FA Cup final the following season.

After being a regular under Roy Evans, James left Liverpool for Aston Villa in a £1.8m deal in June 1999. In a career which has taken him to current club Portsmouth via West Ham United and Man City, David is now the holder of the record for most Premier League appearances. He also has 48 England caps to his name.