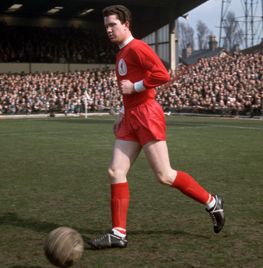 Chris Lawler was a great right-back who held down a regular place in the team between 1965-1973.

A goalscoring defender if there ever was one, he had an astonishing record of 61 goals in 549 games which is especially remarkable considering he was not the club's penalty kick-taker or a free-kick specialist.

Local lad Chris came through the junior ranks at Anfield and signed professional forms on his 17th birthday in October 1960, but had to patiently wait until March 1963 before Bill Shankly gave him his debut in a home fixture with West Bromwich Albion.

Chris made six league appearances in 1962-63 and just another six the following year, but by the end of the 1964-65 season he had taken over Ronnie Moran's full-back slot.

Lawler played in 32 consecutive First Division games that season and was also a proud member of the Liverpool team that won the FA Cup for the first time in the club's history in 1965.

He then missed just three of the next 336 league games, helping his side win the Championship in 1966, reach the Cup Winners' Cup final the same year and another FA Cup final in 1971.

Nicknamed 'The Silent Knight' because of the quiet, uncomplicated way he just got on with his job on the field, he was an extremely reliable member of Liverpool's team.

Even approaching his 30th birthday, he still retained the fitness and stamina to play in every single one of the 66 competitive games the club played in four different competitions during the 1972-73 season - his reward being further winners' medals in the championship and UEFA Cup.

Despite being injured at QPR in November 1973 and only making one more league appearance that season, Bill Shankly still picked him as '12th man' for the 1974 FA Cup final.

In October 1975, Chris moved to Portsmouth, who were managed at the time by his former team-mate Ian St. John.

Lawler was also Liverpool reserve team coach for several years and was capped four times for England in full internationals, scoring on his Three Lions' debut against Malta at Wembley.