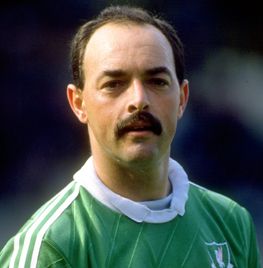 The original eccentric genius between the sticks, Bruce Grobbelaar will be best remembered for the wobbly-legged penalty heroics which brought Liverpool the 1984 European Cup and inspired Jerzy Dudek to the same feat in Istanbul 21 years later.

Other than the European triumph in Rome, there is just the small matter of his other 626 run-outs for the Reds in a glittering 14-year career in which he established himself as one of the Reds' greatest ever custodians and also returned six First Division titles, three FA cups and three League cups.

Brucie was plucked from relative obscurity when Bob Paisley signed him from Vancouver Whitecaps for £250,000 in March 1981. Within the space of a few months, he faced the unenviable task of stepping into the Ray Clemence's shoes after the then Reds No.1 departed for Spurs.

But the South African-born Zimbabwe international rose to the challenge and soon proved himself to be an able replacement for Clem.

It was just shy of five years after making his debut in August 1981 when Grobbelaar missed his next match - a remarkable run of 310 consecutive games keeping goal for Liverpool.

Despite some erratic performances towards the start of his first season, a momentum shift in the second half of the campaign brought consistency for both the Reds and their new keeper. On their way to collecting the league title, Liverpool also beat Clemence's Spurs team 3-1 in the final of the Milk Cup.

Grobbelaar's unique brand of showmanship, altheticism and unshakeable confidence ensured he kept hold of his first team place while Fagan and Dalglish were in charge of the Reds. He regularly took time to sound off at his defenders when he thought their standards were slipping, as Jim Beglin found out during one forceful tirade in the 1986 FA Cup final against Everton.

Bruce was able to see off any competition for his No.1 jersey until a two-year tussle between himself and new recruit David James took place between 1992-94. The younger man was to prove the eventual winner as Grobbelaar was injured in the last minute of what would be his final game for Liverpool in a 2-0 defeat at Leeds in February 1994.

After leaving the Reds for Southampton, Bruce represented Plymouth, Bury, Lincoln, Motherwell, Chesham United and Northwich Victoria, as well as trying his hand at coaching Zimbabwe and managing in South Africa.