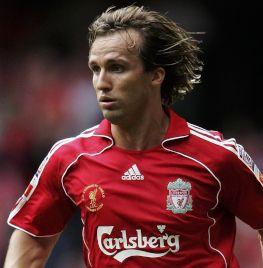 Versatile Netherlands international Boudewijn Zenden was signed on a free transfer from Middlesbrough in July 2005 and played his part in helping Liverpool reach the Champions League final in 2007.

He arrived with vast experience across Europe and in the Premier League, having also previously represented PSV Eindhoven, FC Barcelona and Chelsea.

Zenden, who was commonly known as Bolo, became the third Dutchman to play for Liverpool, following in the footsteps of Sander Westerveld and Erik Meijer.

He provided a useful outlet for Rafael Benitez because he could play central midfield, left midfield and even played at left-back on a few occasions.

Indeed, he exhibited that flexibility in the 2005 Super Cup final by featuring in three different positions during the win over CSKA Moscow in Monaco.

Zenden’s best moment with the Reds came in the 2007 Champions League semi-final at Anfield. A surprise choice to start the clash with Chelsea, he performed impressively on the left side of midfield and scored a penalty in the shootout that Liverpool went on to win. He then also played in the showpiece defeat against AC Milan in Athens.

That would prove to be his last appearance for the club as he moved to French outfit Marseille following the expiry of his contract in the summer of 2007.