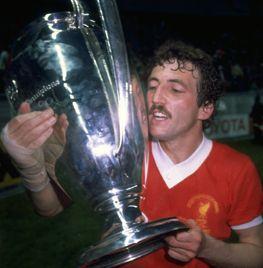 Alan Kennedy was a great attacking full-back who had a knack of scoring vital goals that helped the Reds clinch silverware.

Who can forget when he scored the winning goal in Paris against Real Madrid in the 1981 European Cup final?  And no one can ever fail to remember the look on his face when he celebrated the deciding spot-kick in Rome 1984.

Kennedy had been a 19-year-old full-back for Newcastle United on the day that Liverpool destroyed his FA Cup final hopes in 1974 by beating the Geordies 3-0 at Wembley.

He didn't know it at the time but although he never would collect a winners' medal in the FA Cup, he would win more trophies than he could ever have dreamed possible after his transfer from the North-East to Merseyside just before the start of the 1978-79 season.

The left-back position had been a problem-area for Liverpool in 1977-78, with Joey Jones, Tommy Smith and Alan Hansen all wearing the No.3 shirt at some stage of that season.

But Alan stepped confidently into their shoes and played 37 league games in each of his first two seasons at Anfield, winning League Championship medals on both occasions.

Kennedy missed much of the 1980-81 season through injury but still contributed two priceless goals to keep the club's run of success going on into the 80s.

His extra-time goal narrowly failed to beat West Ham in the League Cup final at Wembley but he was a member of the team that beat the Hammers in the Villa Park replay 18 days later.

Then, on an unforgettable night in Paris eight weeks after, his blistering cross-shot fizzed past the Real Madrid 'keeper in a blur to bring the European cup to Anfield for the third time in five seasons.

His astonishing record of scoring in big games continued as he struck a second-half equaliser against Manchester United in the 1983 League Cup final.

A year later came the most dramatic moment of all, the decisive penalty-kick in the shoot-out that followed the 1-1 draw with the Italian champions from Rome, who had been given the advantage of playing the European Cup final at their own stadium.

Kennedy still played in most of the following season's First Division fixtures, but by the end of the season his place had been taken by Jim Beglin.

After leaving Anfield, Alan had brief spells in Belgium, Denmark and Sweden and also with Hartlepool and Wrexham in the lower divisions of the Football League before continuing to play non-league football until he had passed his 40th birthday.