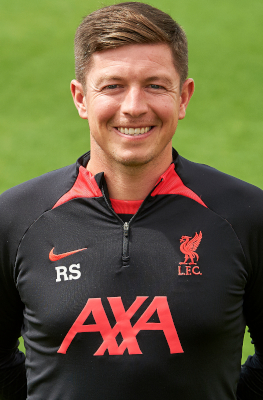 Ray Shearwood is the U21s analyst, a role he took upon in November 2020, and is also assistant manager to Barry Lewtas.

Ray has been at the Academy in a full-time role for eight years and worked with the younger age groups.

He also has a sports science degree and a teachers degree which he obtained from John Moores university in 2013.

His day-to-day role as U21s analyst includes working closely with Lewtas to use the video evidence of games and training to help support the individual development of the young players.

Commenting on his role, Shearwood said: "This is now my eighth year in a full-time role and having had seven years of coaching in the Academy behind me, I feel working in this area will give me a greater understanding of the players needs and how to help them develop.

"The game is becoming more analytical and already you can see just how much the players value the use of video after games, with how many of them who will come and ask staff to go through their games with them.

"As a Liverpool lad and fan it is a great privilege to work at club which has a clear link to the Academy and shows the pathway to the first team, looking at examples of Curtis Jones, Neco Williams and Rhys Williams - not to mention Trent who all came through our pre-Academy and are now in and around the first team."