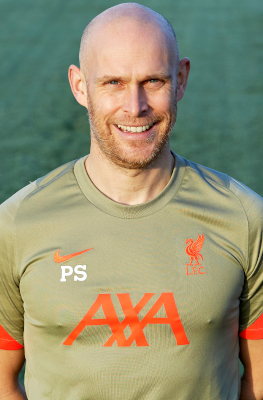 Paul joined the Academy in 2009 and is the rehabilitation fitness coach.

He gained a Sports Science degree at the University of Wales, Bangor in 2004, before going onto study physiotherapy at Leeds Metropolitan University.

After graduating in 2008, he started his career as a junior physiotherapist in the NHS at Aintree University Hospital.

He arrived at Academy in 2009 on a part-time basis providing physiotherapy pitch side cover for match-days and training sessions, and in 2011 took over the role of leading the schoolboy injury clinic, whilst continuing with his work as a senior physiotherapist in the NHS.

This is a role a stayed in until becoming a full time member of staff at the Academy, working with the U18s at the beginning of the 2014-15 season, before switching to the U23s in 2017-18.

On his role, Squires said: "The chance to work with elite Academy footballers and within such an experienced and pro-active medical team is a great opportunity for myself, and one I am really looking forward to."