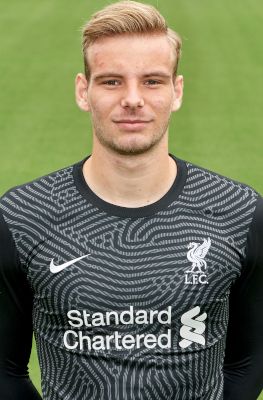 Czech goalkeeper Vitezslav Jaros joined Liverpool from Slavia Prague in 2017 and will spend the 2022-23 season on loan at Stockport County.

He began his time at the Academy with the U18s under the tutelage of Steven Gerrard and, in his second season, helped the Reds win the FA Youth Cup by being part of the squad that defeated Manchester City on penalties in the final.

The stopper then stepped up to U23 level and appeared for the first team in a pre-season friendly against Tranmere Rovers in July 2019.

Jaros signed a new long-term contract with Liverpool in July 2020 and in February 2021 he joined Irish Premier Division side St Patrick's Athletic on loan for the season.

It was a hugely productive move for the 'keeper, who was named the club's Player of the Year and concluded his spell by helping them lift the FAI Cup.

In January 2022 he headed out on loan again, linking up with National League outfit Notts County for the remainder of the campaign.

And he will now seek to gain further first-team experience with newly promoted League Two side Stockport.