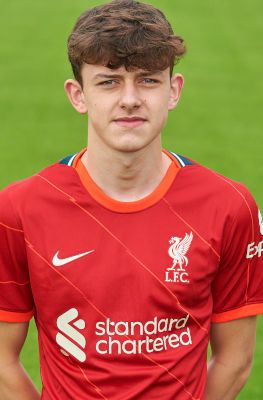 Owen Beck arrived at the Academy from Stoke City at U13 level and has gone on to enjoy action with Jürgen Klopp's first team.

The forward-thinking left-back broke into the U18s team in the 2019-20 season and was also a part of the Reds' U19 UEFA Youth League squad.

Owen, a Wales youth international, signed his first professional contract with Liverpool in June 2020 and penned fresh terms in July 2021 while away with the first team for pre-season, having enjoyed a successful campaign with the U23s in 2020-21.

Beck impressed for the U23s with his ability to get forward and impact play in the final third of the pitch, with highlights including a hat-trick of assists against Tottenham Hotspur at Kirkby in December and an outstanding late winner over Brighton & Hove Albion in April, a game in which he also set up two goals.

Owen made his first-team debut in 2021-22 when he came off the bench during the Carabao Cup tie at Preston North End and featured versus Leicester City in the same competition as Liverpool went on to win the trophy.

Beck initially made a loan move to Famalicao in Portugal's top flight in the summer of 2022, before then spending time at Bolton Wanderers.