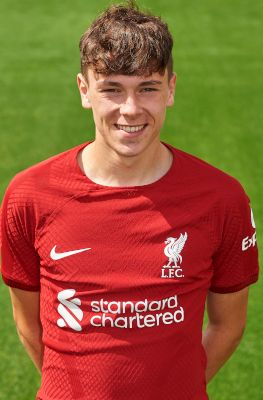 Luke Chambers is a talented left-back who signed a new contract with Liverpool FC in July 2022.

The Preston-born defender first came to the Academy at the age of six. He joined Scottish Premiership outfit Kilmarnock on loan in January 2023, taking his first steps into senior football.

Luke made his U18s debut in 2020-21, making an excellent impression both going forward as well as defensively, and signed his first professional contract in 2021.

Due to one or two injuries in the team during the next campaign, Chambers featured on numerous occasions at centre-half and also became the U18s penalty taker, netting nine goals.

The defender went on to enjoy a fine summer, firstly winning the U19 European Championship with England.

Chambers then travelled on the pre-season tour to Thailand and Singapore with Jürgen Klopp's first team, starting against Manchester United and coming on as a substitute in the clash with Crystal Palace.